Friends and foes alike have praised Julie Bishop's tenure as foreign minister after she stepped aside from the role she has filled for five years.

As an effective and hardworking foreign minister for more than a decade, Julie Bishop has won much public support at home and the respect of politicians and diplomats across the world.

Ms Bishop, 62, was deputy Liberal leader for more than a decade but she only received 11 votes in last Friday's leadership ballot after Malcolm Turnbull called a spill.

Mr Turnbull on Sunday described her as Australia's finest foreign minister and thanked her for her loyalty and friendship.

"She has been and remains an inspiring role model for women here and around the world," he tweeted.

Today we have lost Australia’s finest Foreign Minister @JulieBishopMP I thank Julie for her loyalty and friendship over many years but especially as my Deputy. She has been and remains an inspiring role model for women here and around the world.

Ms Bishop's Labor counterpart Penny Wong paid tribute to her for her trailblazing role as the first Australian woman to be foreign affairs minister.

"For five years she has dedicated her life to our nation with a tireless work ethic and exhausting travel schedule," Senator Wong said.

"While Labor has at times been critical of the foreign policy directions under prime ministers Abbott and Turnbull, Ms Bishop's commitment to standing up for Australia both here and abroad has never been in question."

Western Australian Labor Premier Mark McGowan said it was disappointing Ms Bishop's WA colleagues did not back her in the leadership tilt.

"They should have supported a Western Australian candidate, it's not as though she didn't have enough experience."

" ... she has earned, absolutely, the respect of foreign ministers around the world," he said. British High Commissioner to Australia Menna Rawlings she was sad to hear of Ms Bishop's resignation.

"She has been a gutsy, dynamic, representative of Australia. And a fantastic friend of GB (Great Britain)," she tweeted.

So sad to hear that @JulieBishopMP is stepping down as Australia’s Foreign Minister. She has been a gutsy, dynamic, representative of Australia. And a fantastic friend of 🇬🇧. I wish her the very best, with thanks for all the support, fun friendship. pic.twitter.com/l11og54gDK

Cabinet minister Simon Birmingham earlier on Sunday said Ms Bishop was "the most significant woman in the history of the Liberal Party" and deserved to make a decision about her future without external pressure. Julie Bishop has held the safe Liberal seat of Curtain in WA for 20 years.
AAP

The making of Julie Bishop

Born and educated in South Australia, she moved to Perth with her husband, property developer Neil Gillion in 1983.

They later divorced but Bishop stayed put as she rose through the ranks of Clayton Utz to become managing partner in 1994.

She also served as a director of SBS, chair of the Western Australia Town Planning Appeals Tribunal and a member of the Murdoch University Senate. 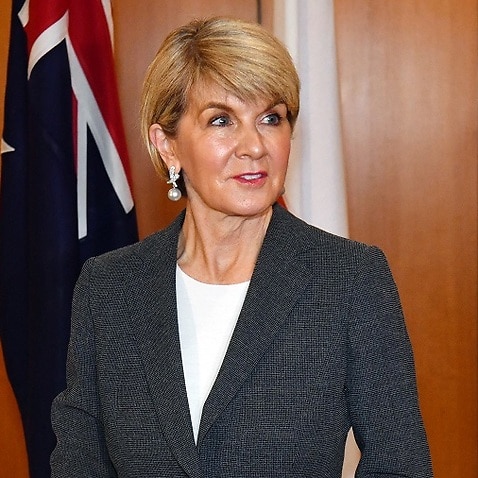 US 'grateful' for Julie Bishop's service

After studying at the Harvard Business School in Boston, she returned to Australia and began her political career.

She's held the blue ribbon Liberal seat of Curtin in Western Australia since 1998.

Bishop briefly served as the Minister for Ageing and then Education Minister under then prime minister John Howard, but it wasn't until 2013 when she was appointed Foreign Affairs Minister by Tony Abbott that she really made her mark. Achievements on the world stage

Bishop reaped the benefits of Labor's lobbying for a United Nations Security Council seat, making the most of it to tackle issues including Iran, Islamic State's rise in Iraq and Syria and shaming Russia over the MH17 tragedy.

The families of the Malaysian Airline disaster victims appreciated her deep and ongoing interest and sympathetic response. Julie Bishop met with dozens of world leaders in her time as foreign minister, including President Rodrigo Duterte in 2017.
AAP

She played a key role in healing the damage caused to relations with Indonesia by Labor's live cattle debacle, turning back boats and the Indonesian president phone tapping scandal.

At times, her profile put her ahead of Turnbull in the popularity stakes.

In a March 2017 poll by Roy Morgan, 30 per cent of people surveyed said she was their preferred Liberal Party leader, compared to 27 per cent for Turnbull and 5 per cent for Peter Dutton. Asked in 2013 if she could withstand several terms of government as foreign minister, the reportedly indefatigable Bishop was unwavering.

"Absolutely," she said without a moment's hesitation.

"You have to have inexhaustible supplies of energy to be a federal politician from Western Australia anyway."

Don’t call her a feminist

She may be Australia's first female foreign minister and has been the most senior woman in Cabinet for years, but she has resisted being defined by her gender.

Her repeated refusal to call herself a feminist has frustrated some.

“I don’t find the need to self-describe in that way [as a feminist],” she famously said in an address to the National Press Club in 2014.

The formidable politician said the term feminism was “not particularly useful” and dismissed concerns about a glass ceiling holding back women in Parliament.

Ms Bishop, who is renowned for her fitness and energy, announced her resignation after finishing the City to Surf fun in Perth with a personal best time.