US TV network MSNBC is under pressure to fire host Chris Matthews after he compared Bernie Sander’s Nevada caucus win to Nazi Germany’s invasion of France.

Senator Bernie Sanders on Saturday earned a decisive victory Saturday in the Nevada caucuses, solidifying his frontrunner status in the race to choose the Democratic nominee who faces President Donald Trump in November's election.

“I was reading last night about the fall of France in the summer of 1940 and the general, Reynaud, calls up Churchill and says, ‘It’s over,’” he said.

“And Churchill says, ‘How can that be? You’ve got the greatest army in Europe. How can it be over?’ He said, ‘It’s over.’”

“So I had that suppressed feeling.” The hashtag #FireChrisMatthews has since begun trending on Twitter, with members of the public calling on the network to terminate his contract.

Mr Sanders was born in New York to a family of Jewish immigrants from Poland. Many of his relatives were killed in Nazi death camps during the Holocaust.

Former Guardian US and Newsweek journalist, David Sirota took to Twitter to share his disgust, writing "None of this is OK".

Bernie is Jewish and his family was killed by the Nazis. None of this is OK. https://t.co/xsz3vUHEKQ

Media Matters for America Editor Parker Molloy called out Mr Matthews for what he said was an "unacceptable" comparison.

It is absolutely unacceptable that Matthews is making comparisons between Bernie Sanders, whose family was murdered by Nazis, to Nazis.@HardballChris needs to retire. Immediately.

This is where Heather Heyer was killed by an actual Nazi in 2017 in Charlottesville. There are real Nazis today. Bernie is Jewish and his family was also killed by actual Nazis. #FireChrisMathews, #FireChuckTodd and anyone one who can’t tell the difference. pic.twitter.com/8uep7qLi6g

#FireChrisMathews for the disgusting and anti-Semitic attacks on Bernie Sanders. Comparing a Jewish man who literally lost family to the Holocaust for wanting to give everyone healthcare is BEYOND acceptable.

Time for MSNBC to quit sowing division because they don't like Bernie. If they get their way,we'll lose

“I think the thing that impacted me most was the Holocaust & what it did to my father’s family & to 6 million people.” Bernie

Despite the pressure to fire Mr Matthews, MSNBC is yet to respond to the incident. Mr Sanders's progressive policies, including universal health care, higher taxes on the wealthy and an increase in the minimum wage, have struck a chord with millions of Americans.

But some Democrats say those policies will make him an easy target for President Donald Trump as a radical leftist, and that if he heads the Democratic ticket in November the party could face sweeping losses.

Mr Trump on Saturday issued a sarcastic-sounding congratulations on Twitter to the man he calls "Crazy Bernie."

Looks like Crazy Bernie is doing well in the Great State of Nevada. Biden & the rest look weak, & no way Mini Mike can restart his campaign after the worst debate performance in the history of Presidential Debates. Congratulations Bernie, & don’t let them take it away from you!

Asked if the Democrats' majority in the House of Representatives might be threatened if Mr Sanders turned out to be Mr Trump's rival in November, one powerful South Carolina Democrat said that it might.

It "would be a real burden for us in these states or congressional districts that we have to do well in," said James Clyburn, the House Democratic whip.

"In those districts, it's going to be tough to hold onto these jobs if you have to make the case for accepting a self-proclaimed Democratic socialist." 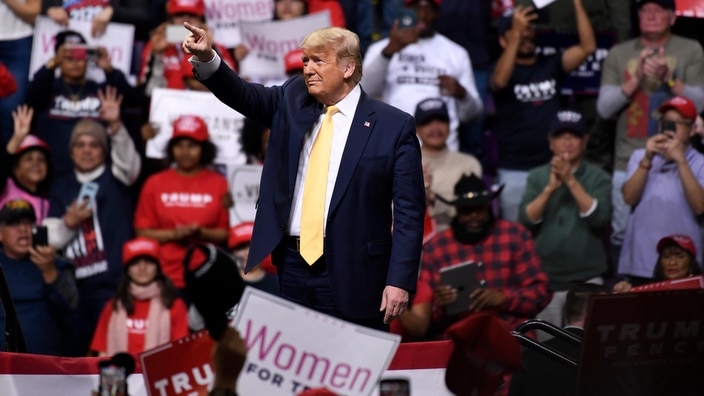 Mr Sanders leads national polls by an 11 point margin over Biden and by 13 points over Mike Bloomberg, the former New York mayor who skipped the early voting states to focus on Super Tuesday.