Hundreds of people have taken to the streets in India to protest the gang rape of a veterinary doctor whose body was set ablaze and thrown under a bridge.

Hundreds of people on Saturday laid siege to a police station where four men are being held over the latest gruesome rape-murder to shock India.

Baton-wielding police pushed back crowds from the building in the southern city of Hyderabad where they said the 27-year-old veterinary doctor was gang-raped, killed and then her body burned.

While the suspects were quickly detained, the killing sparked new outrage in a country that has been in the international spotlight over its handling of sex assaults since the brutal gang-rape and murder of a student on a Delhi bus in 2012.

"How anyone could subject another human being to such terrible, unprovoked violence is beyond imagination," said former opposition Congress party leader Rahul Gandhi on Twitter. A woman holds a placard as she protests
EPA

Police had to bring in reinforcements to bolster security around the Hyderabad police station. The suspects were to appear before a magistrate for what was expected to be the start of "fast-track" proceedings later Saturday.

But police were also criticised as protests spread to other cities.

A woman who tried to stage a one-person demonstration outside the Indian parliament in New Delhi said she was beaten by police after refusing to go home.

Anu Dubey had sat outside the assembly carrying a sign questioning why she could not "feel safe" in her own country.

"The only purpose of this protest is to ensure that I am not burned to death tomorrow," she told reporters later, fighting back tears.

"That woman died, other girls have also died. Every 20 minutes, there is a rape in India. I don't want to die. And I can't be a spectator to any more rape cases. I'm tired of seeing such cases over and over again," she said. A woman holds placards as she protests
EPA

According to government figures, more than 32,000 rape cases were reported in 2017, however, experts say that the crime is vastly unreported.

Other cases reported Saturday included a 16-year-old girl who died in a Delhi hospital 10-days after being allegedly raped by a neighbour and then set ablaze.

Police said the 27-year-old Hyderabad vet, who cannot be named, was abducted on Wednesday night after she left her scooter near an express-way toll booth.

The four men are alleged to have deflated a tyre whilst she was away and offered to help when she returned to collect it.

The victim called her younger sister to say she was stranded and that a group of men had offer to fix her scooter. 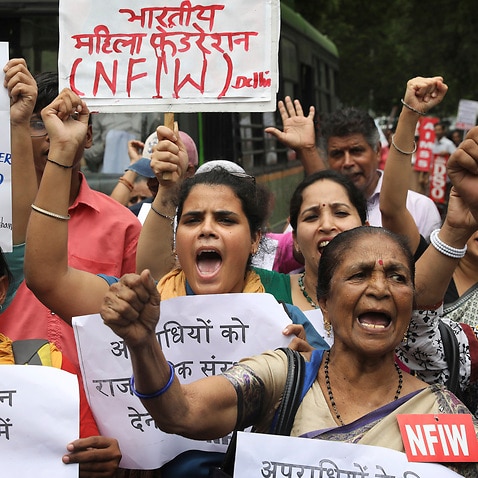 The woman said she was "afraid", according her sister's testimony to police. The sister called back later but the victim's phone was switched off.

Police said the ashes of the woman's body were found on Thursday morning. The body had been wrapped in a blanket and doused with kerosene.

The killing has set off a firestorm of social media comment, many calling for a tough reaction.

"The culprits must be given severest punishment," commented Rajasthan state's chief minister Ashok Gehlot, one of tens of thousands to post Twitter comments.

Women's groups turned against a minister in Telegana state, which includes Hyderabad, who said the dead woman could have been saved if she had called police first instead of her sister.

"Is there no shame," hit back Swati Maliwal, head of the Delhi Women's Commission. "Now the blame is being put on the dead victim."