Australia’s decision to abstain on a UN vote calling for the US to drop its recognition of Jerusalem as Israel’s capital has drawn mixed responses from the Israeli and Palestinian authorities in Canberra.

Australia’s decision to abstain from a controversial United Nations vote on a US move to recognise Jerusalem as the capital of Israel was “disappointing”, the Palestinian Authority’s representative in Canberra said.

But the Israeli embassy has welcomed the move, saying the Jewish state “appreciated” the gesture.

SBS News contacted both embassies in the wake of the vote, in which an overwhelming 120 countries opted to urge the United States to reverse Donald Trump’s decision. 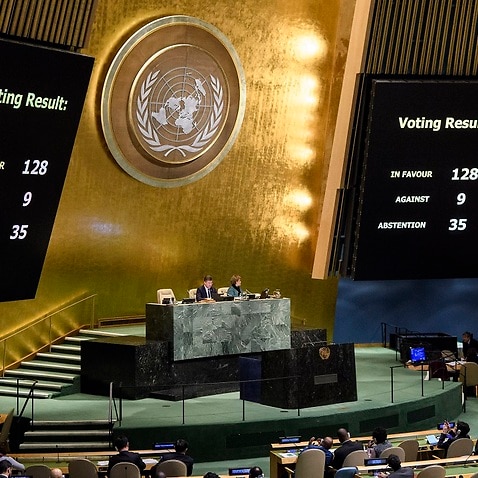 Only nine countries voted against the resolution, including Israel and the US. Most of the other seven countries were small island nations, including Nauru.

A further 35 counties abstained, including Australia and Canada.

The United Kingdom was of the majority of countries that voted Yes, despite threats from the United States that it would take the result “personally”.

The Palestinian Authority’s ambassador to Australia, Izzat Abdulhadi, said the result was disappointing, especially given that Australia’s foreign minister Julie Bishop had said on Thursday the UN motion did not “conflict” with Australia’s position of supporting a two-state solution.

“It was disappointing, a little bit. Because… Ms Bishop said just three or four days ago the position of Mr Trump to recognise Jerusalem as the capital of Israel will increase tension,” Mr Abdulhadi told SBS News.

Mr Abdulhadi said the decision to abstain was “very obviously” driven by a desire to appease Australia’s ally, the United States.

In a statement, Ms Bishop told SBS News the decision to abstain was consistent with Australia’s position.

“Australia’s voting position… concerning Jerusalem reflected our assessment that it did not materially advance the peace process,” the statement read.

“We do not wish to see any party isolated from the process through this resolution, so we abstained on this occasion.”

But Israel’s ambassador to Australia, Mark Sofer, said the decision to abstain was welcome.

“There are enormous amounts of constraints and pulls and pushes, and we appreciate the Australian vote,” Mr Sofer said.

“Australia didn’t find itself drawn into yet another Israel-bashing resolution.”

Mr Sofer said it was inconsistent that the UN General Assembly had dealt with 21 resolutions on Israel, but only a handful about states like North Korea, Iran and Syria, where human rights have been abused on a massive scale.

“Does it mean anything? No it doesn’t, to us. It’s non-binding. Jerusalem has been the capital since time immemorial,” Mr Sofer said.

“The truth is the United Nations, the General Assembly I’m talking about here, has really become an impediment to peace in the Middle East rather than something that’s going to assist and move us along in the direction that we need to be.”

While the US has committed to moving its Israeli embassy to Jerusalem, Australia will keep its embassy in Tel Aviv, the foreign minister said.