A court has ordered $220,000 in damages be paid in a landmark racial discrimination case brought by Palm Islanders against the Queensland government and the state's police force

A group of Palm Islanders have won parts of a class action against the Queensland Government and police force in a racial discrimination case in the Federal Court.

The action alleged police failures after the death in custody of Cameron (Mulrunji) Doomadgee in 2004 and that it wouldn't have happened in a community that wasn't predominantly Aboriginal.

In a scathing judgement handed down this afternoon Justice Debbie Mortimer ruled that police had violated the Racial Discrimination Act, finding some of the complaints brought in action to substantiated as racially discriminatory.

"I have found that police acted in these ways because they were dealing with an Aboriginal community, and with the community of Palm Island in particular," she wrote in her decision. 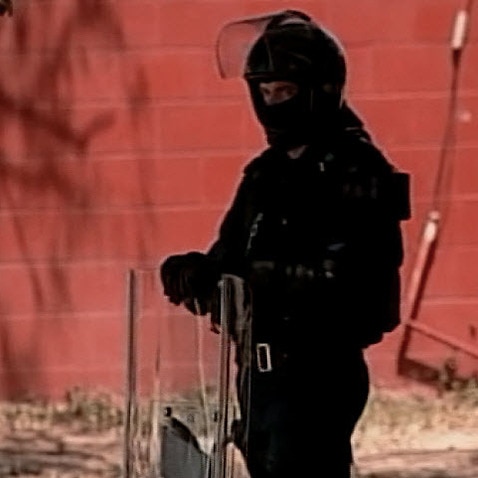 "Officers preferred confrontation to engagement and operated very much with an “us and them” attitude."

"I am comfortably satisfied QPS officers would not have taken a similar approach, in any of the respects I have outlined above, if a tragedy such as this had occurred in an isolated non-Aboriginal community in Queensland."

The rioting was triggered by the death in custody of  Cameron (Mulrunji) Doomadgee, with a preliminary autopsy report revealing he had four broken ribs and a liver almost cleaved in two.

Justice Mortimer also found the armed response was out of proportion and was taken because the community was Aboriginal.

"I am satisfied that armed, masked SERT officers would not have forced their way into houses occupied by unarmed families, including young children, and pointed assault rifles at them, yelling at them to lie down and not move, making those families think they were in danger of being shot."

Islander Lex Wotton served 20 months in jail over the violence that took place after Mulrunji's death, said the the community had eagerly awaited the verdict.

"Hopefully it'll change a lot of things in the policing area and it will get back to what was discussed some 25-years-ago about the Royal Commission into Aboriginal deaths in custody."

Lawyer for the Palm Islanders, Stewart Levitt, said the verdict was a win for Aboriginal people who had in the past felt powerless under the law.

"We’re very pleased that this is a great vindication for Aboriginal people accessing the legal system to seek remedies for wrongdoing which has occurred in their midst, and this was a situation where rioters have now turned their back on spontaneity and channeled their energy into testimony, litigation and been vindicated by a verdict that recognizes the wrongdoing which was imposed upon them," he told SBS after the verdict.

A spokesman for the Queensland Government told SBS: “The Government will consider Justice Mortimer’s judgement carefully before commenting further."

"I personally know many police who served and continue to serve on both Palm Island at that time and in Indigenous communities and I know they are not racist," he said.