It is the third weekend 'yellow vest' protesters have taken to the streets to protest against rising fuel prices.

At least 80 people have been injured and more than 180 arrested in central Paris after violent clashes between police and protesters, in a third weekend of nationwide demonstrations against high living costs.

Police have fired tear gas, stun grenades and water cannons in battles with protesters around the Arc de Triomphe near the Champs-Elysees avenue.

Clashes were reported elsewhere across the city centre on Saturday, as well as in other towns across the country. Firefighters try to put out a fire engulfing a car near the Champs-Elysees avenue.
AAP

The Galeries Lafayette and Printemps department stores in central Paris closed their doors amid the violence, two spokeswomen told Reuters, while firemen were seen putting out a blaze at a building near the Champs-Elysees.

Paris Mayor Anne Hidalgo tweeted her "indignation" and "deep sadness", saying that violence is "not acceptable".

French President Emmanuel Macron vowed never to accept violence, responding to the protests against him in Paris.

"I will never accept violence," Macron he told a news conference at a Group of 20 summit in Buenos Aires amid the massive "yellow vest" demonstrations.

"No cause justifies that authorities are attacked, that businesses are plundered, that passers-by or journalists are threatened or that the Arc du Triomphe is defiled," he said. Police said they had arrested 183 people amid concerns that violent far-right and far-left groups were infiltrating the "gilets jaunes" (yellow vests) movement, a spontaneous grassroots rebellion against the struggle many French face to make ends meet.

For three weeks, protesters have blocked roads across the country, posing one of the largest and most sustained challenges French President Emmanuel Macron has faced in his 18-month-old presidency.

At least 80 people, including 11 members of the security forces, have been injured in the capital, Paris police said.

The skirmishes in Paris broke out early on Saturday, with rioters and peaceful protesters mixed together after authorities cordoned off the Champs-Elysees, forcing them into adjacent streets.

Demonstrators put up barricades in the surrounding areas, smashed some car windows and set alight dozens of vehicles, including a police car. 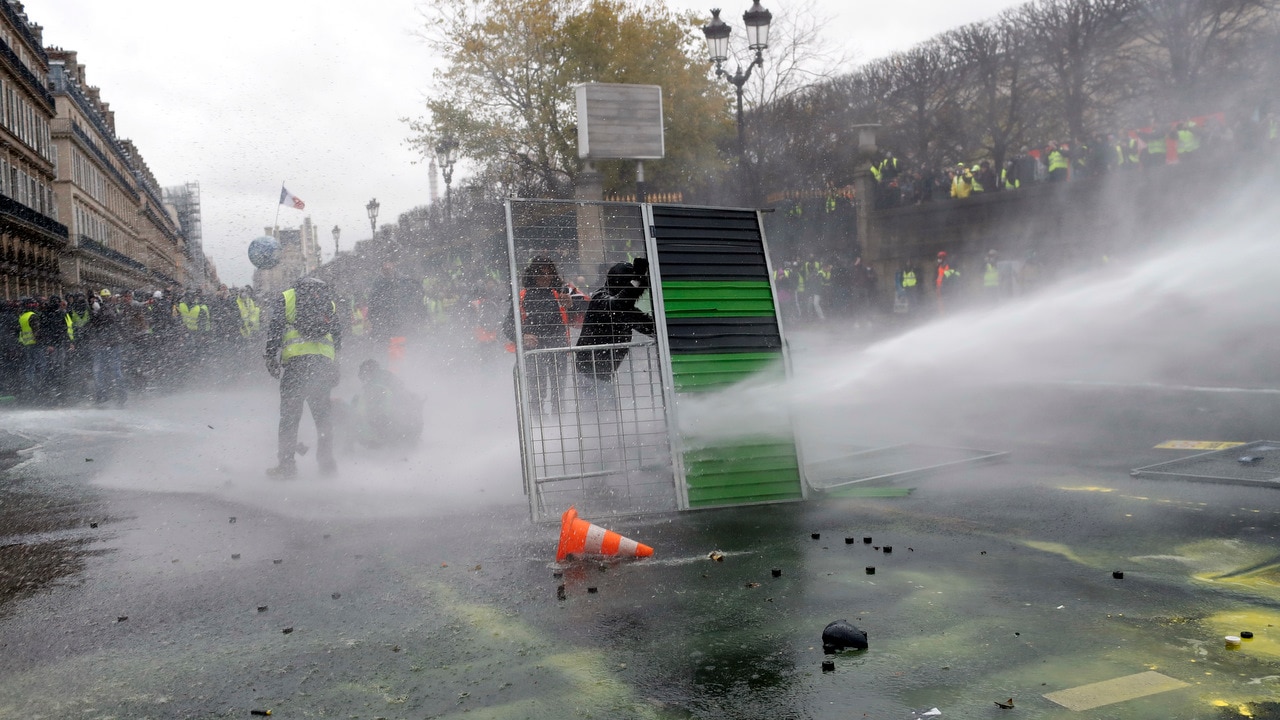 Demonstrators use street barriers to shield from water cannons during a demonstration in Paris.
AAP

A restaurant in the vicinity was also set ablaze.

Several hundred yellow vests, who have no leader and have largely organised themselves online, sat down around the Tomb of the Unknown Soldier under the Arc de Triomphe, singing La Marseillaise, France's national anthem, and chanting, "Macron Resign!"

On the facade of the towering 19th-century arch, protesters scrawled in big black letters: "The yellow vests will triumph".

The yellow vests, who enjoy widespread public support, get their name from the high-visibility jackets all motorists in France must carry in their vehicles.