The government has supported a motion calling for a disabilities royal commission, but advocates have slammed the lack of a concrete timeline.

The federal government has voted in favour of establishing an inquiry into the abuse, neglect and mistreatment of people with a disability in Australia but advocates have hit back at the Prime Minister's failure to set a date.

The coalition government backed the motion in the House of Representatives on Monday, four days after it passed the Senate without their support.

"I take the issue of abuse and neglect of people with a disability very seriously and so does the government I lead," Scott Morrison told parliament on Monday.

"We take it seriously because abuse and the neglect of our most vulnerable is abhorrent."

But Greens senator and vocal disability advocate Jordon Steele-John called on the Prime Minister to immediately announce a timeline for the inquiry.

PM just shook my hand and said "well done"
I said "a timeline is what is needed now"
Response "I've said what I've said".
Not a good start @ScottMorrisonMP #RoyalCommissionNow #auspol

"This afternoon ... in the house, the Prime Minister failed to take one step which would have brought joy and elation to disabled people, and that was to commit his government to call for a royal commission," Mr Steele-John said after the vote.

"He used a lot of big, kind words, but he failed to say the one thing that we needed to hear from him, which was that he would pick up the phone to state and territory ministers and solicit their report and call the royal commission."

Mr Morrison said he would seek further advice from the states and territories on the issue and stressed that they had previously rejected a call for a royal commission.

"These are hurdles that will have to be addressed," Mr Morrison said.

Labor has accused the government of dragging the chain on setting up an inquiry, considering it voted against it last week.

But Opposition Leader Bill Shorten welcomed the motion's success on Monday and called for a decision on the inquiry's timeline.

"It has been on the books for too long, this proposition," he told parliament.

Mr Shorten stressed royal commissions - which can only be called by the executive - have previously been called without the support of states and territories.

Greens leader Adam Bandt agreed with the Labor leader on the need for a timeline.

"What we need now is action. People have been waiting for a very, very long time," he said.

Mr Morrison earlier told parliament it's vital there is bipartisanship on the issue of caring for people with disabilities.

He said at no point had he opposed the royal commission.

That came after the prime minister allowed the longest question time on record last week, avoiding a potential vote on the motion. 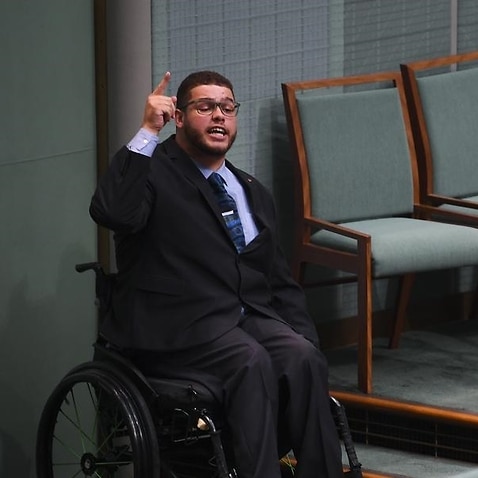 Mr Morrison said he understood there would be no opportunity for the matter to be discussed in the lower house Thursday, as it was in the process of transmission from the Senate.

Greens senator Jordon Steele-John, who uses a wheelchair and is a vocal advocate for disability rights, had raised the issue in the upper house.

He tweeted Mr Morrison "well done" on Monday, after which he asked for a timeline and Mr Morrison told him: "I've said what I said."

"Not a good start," Senator Steele-John wrote on Twitter.

'It's not a political issue'

The Disability Discrimination Commissioner Alastair McEwin said he would like to see the inquiry happen before the upcoming federal election.

"For me it's not a political issue and it should not be," he said. Co-CEO of People with Disability Australia Therese Sands said she welcomed the vote, but said the next step was to make the Royal Commission a reality.

"We are concerned that there was not a definite announcement or timeframe to establish a Royal Commission, nor a commitment to look at the breadth of issues we have raised with the Federal Government over many years," she said.

Previously, the Attorney-General said the commission would likely look into state-run facilities, and therefore need approval from state and territory governments.