One Nation leader Pauline Hanson has been suspended from Twitter after suggesting electric cattle prods could be used to disperse climate change protesters.

Senator Hanson posted a video on Twitter earlier this week that featured her holding a cattle prod and urging the Queensland government to deploy them against protesters who disrupt the public. On Thursday, Senator Hanson issued a statement saying she has since been suspended from the social media platform, claiming it was "part of the ongoing efforts of the Left to stop freedom of speech and silence anyone with whom they don't agree".

Senator Hanson was suspended for breaching a rule that says users "may not engage in the targeted harassment of someone, or incite other people to do so".

But Senator Hanson said the ban was hypocritical as she had recently "been the subject of abusive tweets that seem to support her death or serious injury".

The senator cited one tweet, in relation to her plan to climb Uluru this week, saying "Praying for Pauline to fall off Uluru". 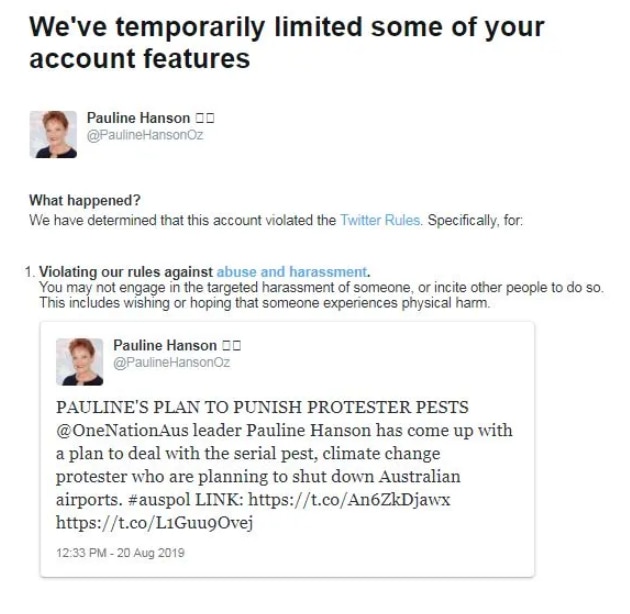 Titled "Pauline's plan to punish protester pests," the offending video features Senator Hanson walking towards the camera on a Queensland farm with a cattle prod.

"When the farmers have trouble getting the cattle up off the floor of the trucks, or in the cattle yards, they just touch them with this and they'll soon move; it doesn't matter how big the beast are, they will move with this," she says. "Well, recently, we've had all the protesters in Brisbane, lying on the streets, gluing themselves. And what about the protestors now? They want to go to the airports, stop the traffic at the airports."

The video was widely criticised on social media when it was first shared.

Inciting violence is a criminal offence.

I thought you were all for free speech. Does this mean you’re only for it when it’s about something you actually agree with? Because that would make you some sort of hypocrite

Dozens of Extinction Rebellion climate protesters have been arrested in recent weeks after disruptive protests in Queensland.

The protesters want communities to collectively find solutions that would lead to zero carbon emissions by 2025, the preservation of biodiversity and the truth being told about global heating.

They say stopping traffic makes people take notice of the issue and is necessary action to avoid extinction.