Federal politicians from all sides have condemned One Nation Leader Pauline Hanson after she wore a burqa in the senate chamber.

There were audible groans in the Senate as she walked in and one person was heard saying "What on earth?"

Senator Hanson removed the burqa a few minutes later as she attempted to ask the Attorney-General a question on banning the garment altogether.

“Will the Attorney-General ban this burqa?” she said in the Senate.

Senator Brandis' passionate impromptu response to the One Nation senator's stunt earned a standing ovation from Labor and Greens senators.

“You are not an adherent of the Islamic faith,” Senator Brandis said in a passionate response.

“I would caution you and counsel you. Be very, very careful of the offence you may give.”

Someone literally says 'What on earth?' as Pauline Hanson enters in what looks like a burqa #auspol #breaking pic.twitter.com/fVBg8GSyns

"We have about 500,000 Australians in this country of the Islamic faith. And the vast majority of them are law abiding good Australians."

Mr Brandis said that it was vital to work with the Muslim community to combat the threat of radicalisation.

"It is vital for their intelligence and law enforcement work that they work cooperatively with the Muslim community, and to ridicule that community, to drive it into a corner, to mock its religious garments is an appalling thing to do and I would ask you to reflect on what you have done."

Independent Derryn Hinch asked Senator Parry whether he could come into the chamber wearing fancy dress, given Senator Hanson is not a Muslim. 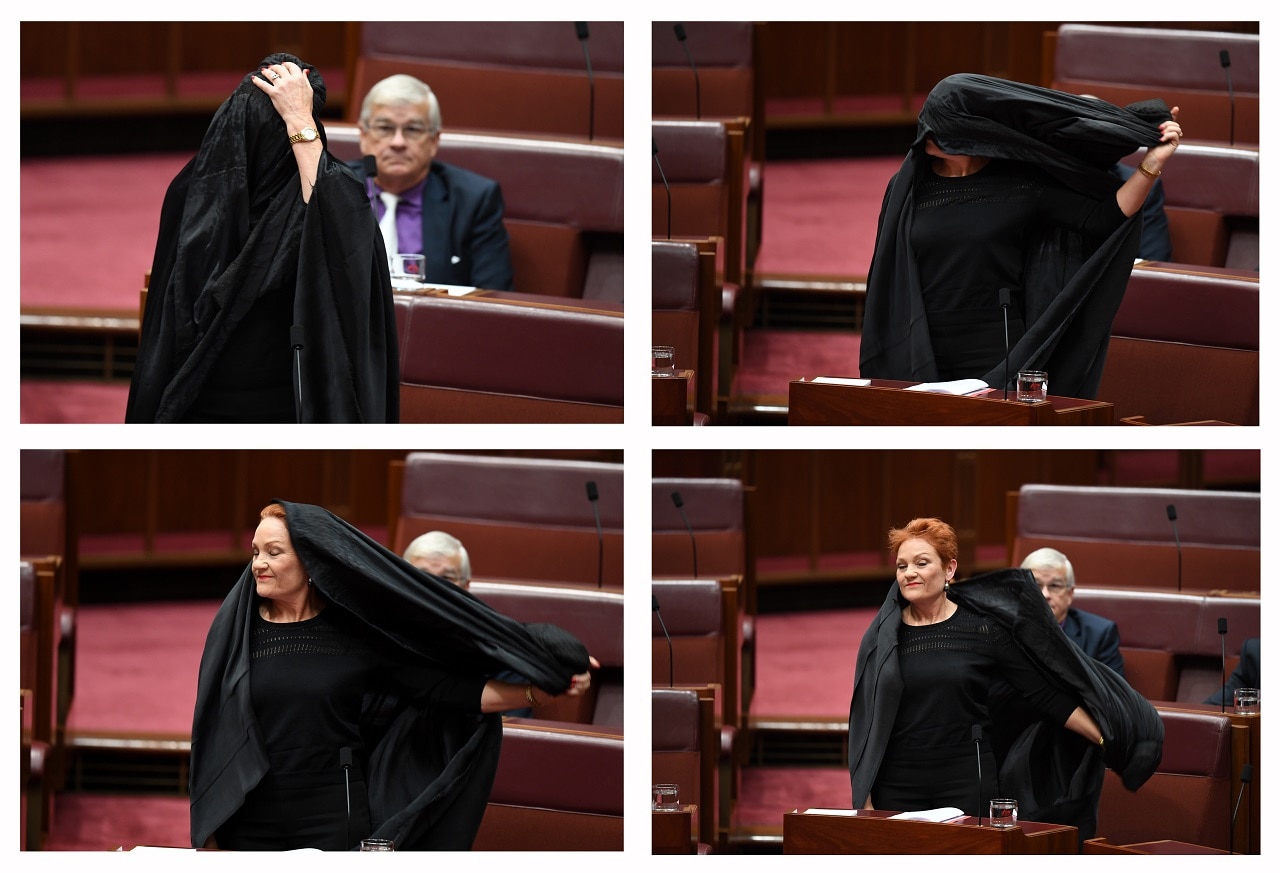 A combined picture of One Nation Senator Pauline Hanson taking off a burqa during Senate Question Time at Parliament House in Canberra.
AAP

Senator Parry said he would not interfere with what Senators wore.

“It may have been something that I did that was radical, yes it was, coming into this chamber with a burqa on but it was a case in point saying that I do not believe that at any point in time ever in the future that any full face coverings should ever be worn in this place,” Senator Hanson later said in the chamber.

She has since moved a motion in parliament calling on the federal government to ban the burqa but it was defeated within an hour.
Related 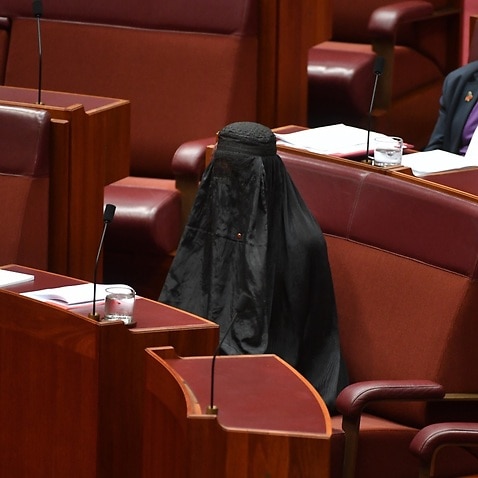 There is no point to be made here. Imagine how a young Muslim girl will feel having her faith and her family mocked in our Parliament. Shame pic.twitter.com/yFM2hunzo2

“How can you justify the banning of a helmet or balaclavas but not a burqa when entering a bank?”

She has also renewed her push for a temporary ban on Muslim immigration for at least five years.

“If we do not draw a line in the sand against immigration from Islamic countries, the influence of Muslims in this country will continue to grow and Australia will continue down the path of Islamisation."

Senator Nick Xenophon has applauded the Attorney General's response to Pauline Hanson's burqa stunt and says it was offensive and demeaning to people of the Islamic faith.

This isn't a stunt - it's deeply offensive, calculated and divisive #auspol #nswpol pic.twitter.com/SLueiK2UGO

"I know a thing or two about stunts but I wouldn't even call this a stunt, this was just toxic," Senator Xenophon told reporters in Canberra.


"I do not believe, no matter what anyone thinks, that pulling those sorts of antics in parliament does anything other than trivialise parliament and democracy," Mr Shorten told reporters in Canberra.

Pauline Hanson entered the Senate like this..... #auspol pic.twitter.com/n77zxtU1Pt