Peter Dutton stepped away from a family trust that received commonwealth subsidies that threw up questions over whether he should be banned from parliament.

Home Affairs Minister Peter Dutton has renounced his interest in a family trust that sparked questions about his eligibility to sit in federal parliament.

Labor last year pressured the minister over his family's interest, through the trust, in two Brisbane childcare centres which received commonwealth subsidies.

They theorised Mr Dutton may be in breach of section 44 of the constitution, which bans from parliament anyone who has "any direct or indirect pecuniary interest with the public service of the commonwealth". In a statement issued on Thursday, a spokeswoman for the minister stressed he had received two unambiguous legal opinions from leading barristers saying he wasn't in breach.

The Solicitor-General supported the opinions in his own advice.

But the minister gave up his interest in the RHT Family Trust before the May 18 election regardless.

"To silence those who are politically motivated and continue to raise this; prior to the minister's nomination at the May election, he formerly renounced any interest in the trust in question," the spokeswoman said.

The confirmation comes after the minister blasted an "inappropriate" last-ditch attempt by former prime minister Malcolm Turnbull to save his leadership stemming from concerns about Mr Dutton's eligibility. The day before he was deposed, Mr Turnbull reportedly hatched a plan to persuade Governor-General Sir Peter Cosgrove not to endorse Mr Dutton as leader.

"Christian Porter ... didn't take sides, he looked at what needed to be done as attorney-general of our country and he saw inappropriate behaviour taking place," Mr Dutton told 2GB Radio on Thursday.

Mr Porter conceded the meeting wasn't "all potpourri and roses" but said his job as attorney-general was to provide accurate legal advice, which sometimes was not what people wanted to hear.

The former prime minister tweeted on Thursday that the discretion to swear in a PM was vested in the governor-general.

"The proposition advanced by Mr Porter that it is none of the GG's business whether the would-be PM is constitutionally eligible is nonsense. The GG is not a constitutional cypher," Mr Turnbull wrote.

The discretion to swear in a person as PM is vested in the Governor General. The proposition advanced by Mr Porter that it is none of the GG’s business whether the would be PM is constitutionally eligible is nonsense. The GG is not a constitutional cypher.

He added that during the week of August 24, 2018, there was advice from constitutional lawyer Bret Walker that Mr Dutton was ineligible to sit in the parliament "and thus ineligible to be a minister, let alone prime minister".

Mr Turnbull then received advice from the solicitor-general which said Mr Dutton was eligible but it was "impossible to state that position with certainty" and there was some risk the High Court could rule him ineligible.

"Asking me to come back as home affairs minister after I'd resigned on the Tuesday demonstrated he had no concern for my eligibility to sit in the parliament," Mr Dutton said.

"The Labor Party never raised it in the most recent election and it was only ever used as a delaying tactic to damage me, which he was able to do." 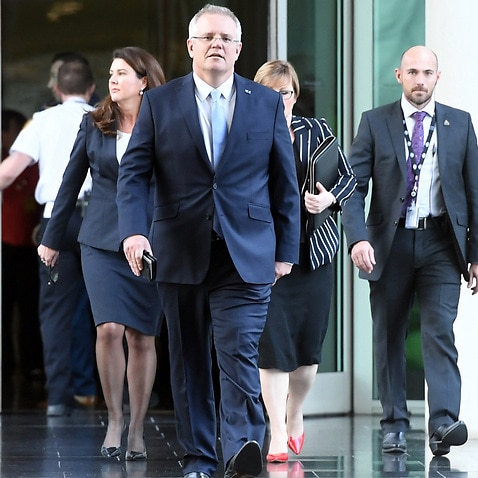 'They should all be ashamed': Australians react to the Liberal leadership spill

The governor-general's office was tight-lipped about his "private and confidential" conversations with the prime minister.

"I can, however, confirm that no formal advice was sought or provided to the office in relation to any eligibility issues," a spokesman for his official secretary told The Australian.