SBS News looks at the rise and fall and rise of Pauline Hanson's One Nation.

Few Australian political parties are as divisive as Pauline Hanson's One Nation.

To its members it is "breaking the chains of political correctness", to its critics it represents "pure hatred".

And while other minor parties come and go, One Nation continues to be an influential force in the country's political and cultural landscape.

One Nation remains inextricably linked to its co-founder Pauline Hanson.

The former fish and chip shop owner gained Liberal pre-selection for the Queensland seat of Oxley at the 1996 federal election. 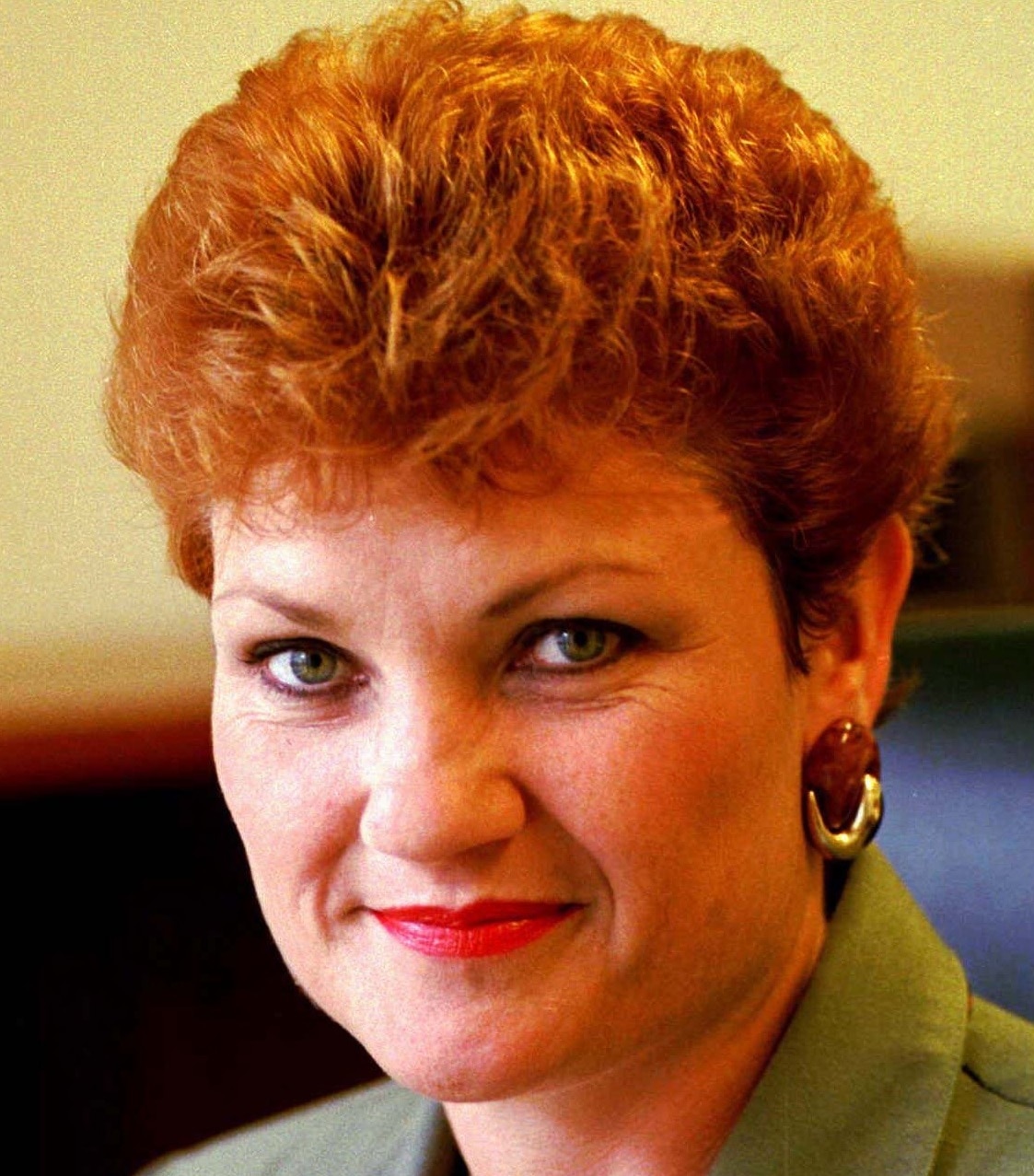 But she was disendorsed by the party shortly before the vote, due to controversial comments she made about Indigenous entitlements.

On a populist and protectionist platform, Ms Hanson went on to win the seat as an independent.

James Frost of the ANU's School of Politics and International Relations said Ms Hanson "hit a nerve during a time in which Paul Keating had put race on the agenda as something we need to address".

"She pulled people away from both Labor and the Liberal Party." 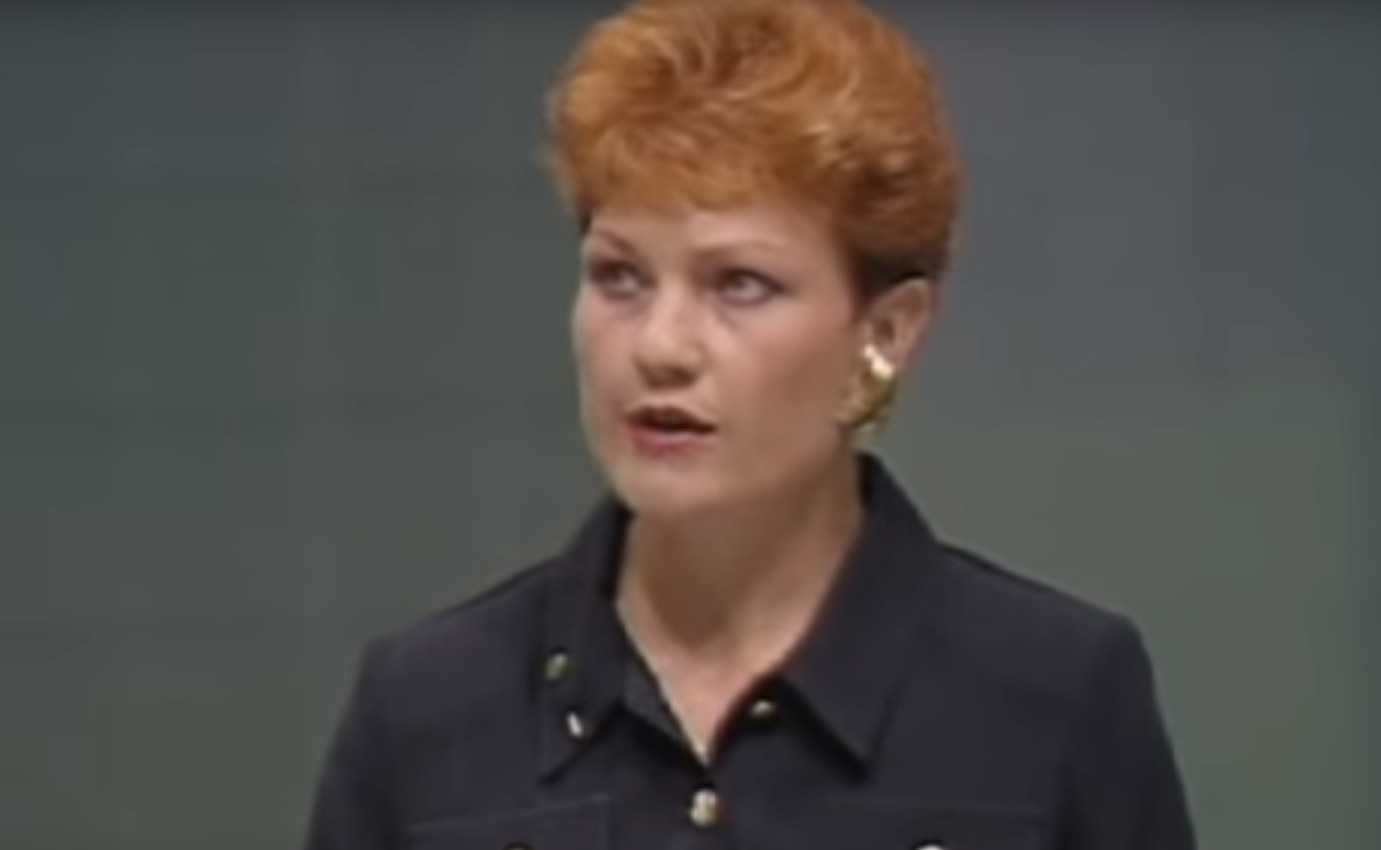 In her maiden speech, the then-MP told Parliament "I believe we are in danger of being swamped by Asians".

"They have their own culture and religion, form ghettos and do not assimilate ... A truly multicultural country can never be strong or united," she said.

Later asked by a reporter if she was xenophobic, she famously replied: "please explain?"

"It was called Pauline Hanson's One Nation, which gives you a bit of insight into the way in which Pauline envisages her party," Mr Frost said.

Party material boasts it "rallied against government immigration and multicultural policies which ... were leading to the Asianisation of Australia".

Mr Frost said "[then] in 1997 you had the Wik case ... that gave Hanson a bigger megaphone because she was shouting loudest that we need to overturn all native title rights for Indigenous people." 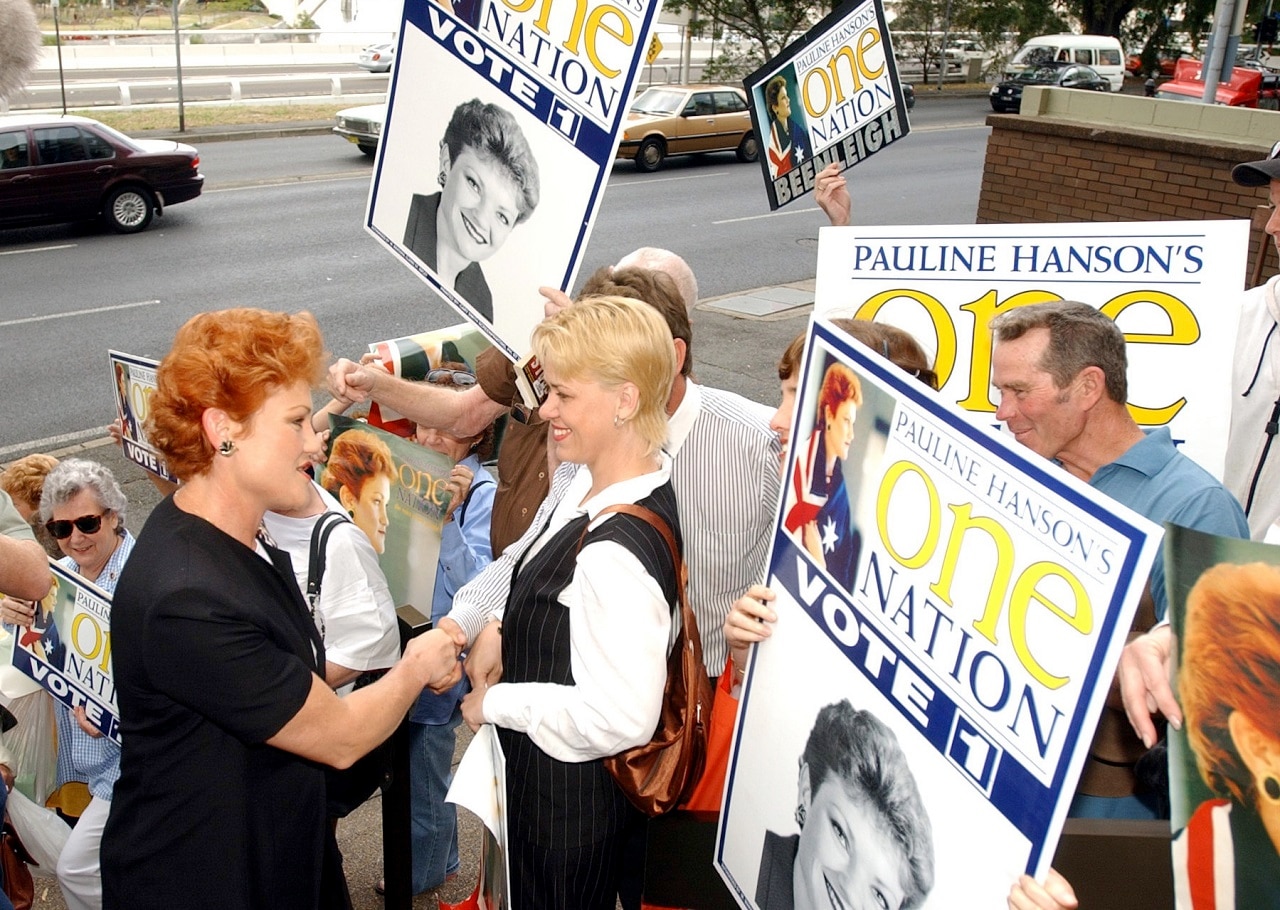 And her divisive messaging worked - at least initially. One Nation won more than 22 per cent, or 11 seats, in Queensland's unicameral legislative assembly at the 1998 state election.

Federally, the party peaked at the 1998 election on 9 per cent of the nationwide vote.

But the success of One Nation caused outrage for many Australians. Protests were held against the party around Austalia.

Former Prime Minister Paul Keating summed up the many criticisms in a lengthy take-down.

"The great tragedy is that it perpetrates a myth, a fantasy, a lie." 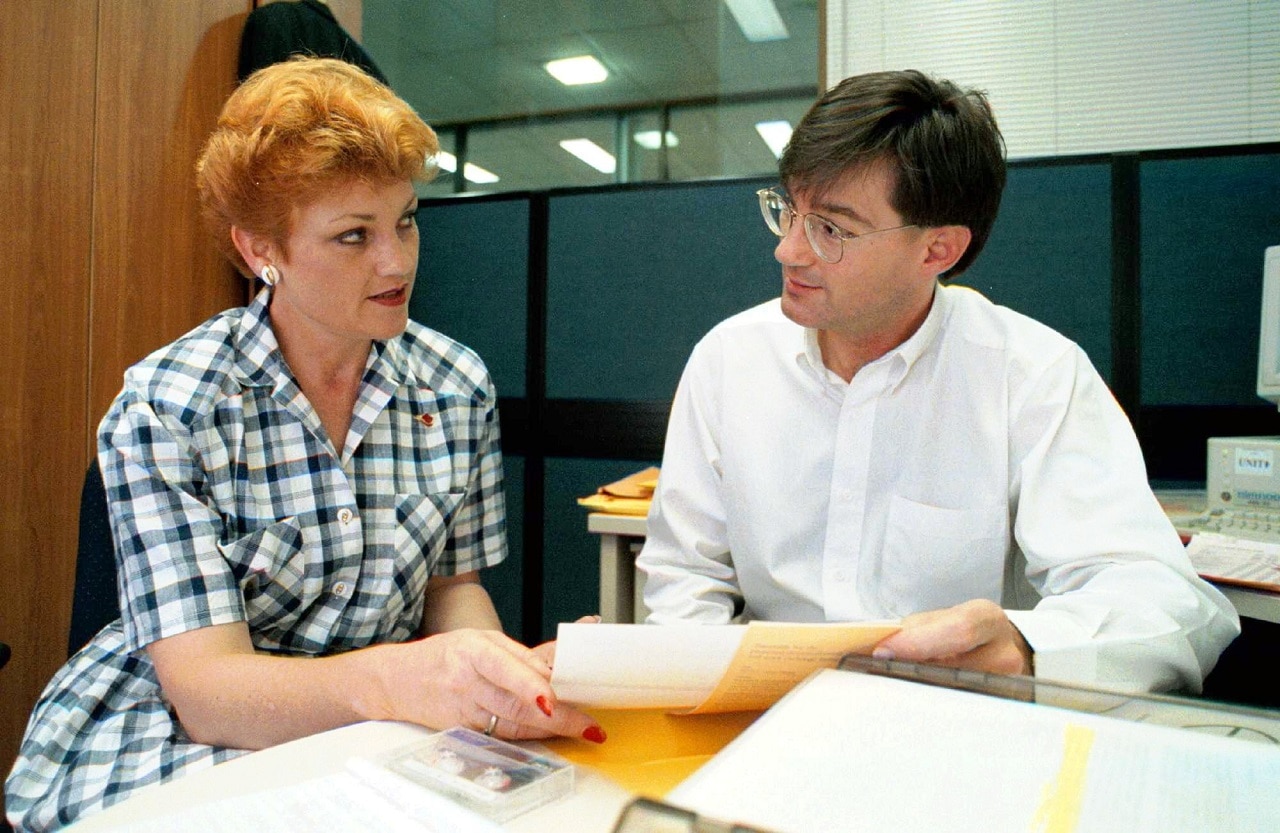 But One Nation's initial success proved to be short-lived.

Ms Hanson lost her seat in 1998 and the party was hit with internal divisions. 'I cop all this s***': Pauline Hanson breaks down

In 2003, Ms Hanson and Mr Ettridge were found guilty of electoral fraud and briefly served time in jail before their convictions were quashed.

One Nation continued to contest state and federal elections but could not replicate its early victories.

After more than a decade of absence, Ms Hanson returned to the national leadership of One Nation in 2014.

She stood for the 2015 Queensland election but was defeated by a sitting LNP member by slightly more than 100 votes. 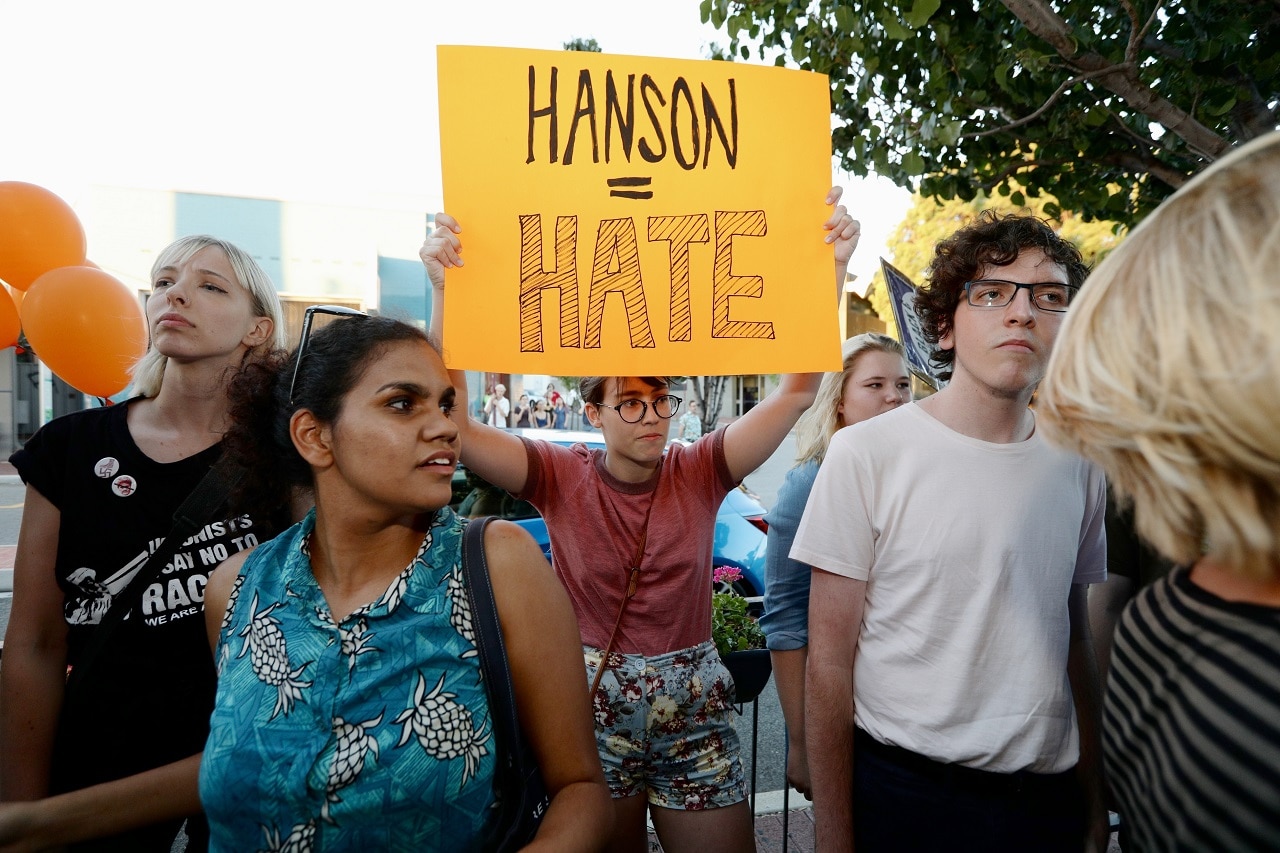 A protest against Pauline Hanson in Perth.
AAP

The party well and truly re-emerged in 2016, when Ms Hanson was returned to Parliament along with three other Senators.

"She has become a brand," Mr Frost said.

"[And] there's a symbiotic relationship with the media ... Her continual relevance is entwined with the media's need to have a political story that is going to capture people." Almost 20 years to the day, Ms Hanson gave her second maiden speech, this time to the Senate. Her views were similar but her target was different.

"We are in danger of being swamped by Muslims who bear a culture and ideology that is incompatible with our own," she said.

"Islam cannot have a significant presence in Australia if we are to live in an open, secular and cohesive society ... We have seen the destruction it is causing around the world."

In the fallout, Greens Senator Sarah Hanson-Young told Parliament "this is pure hate".

"Pauline Hanson is a racist. All you need to do is listen to her own words," she said.

Ms Hanson's second stint at Parliament has been marred with controversy.

In 2017, she wore a burqa in Parliament, amid calls to ban the religious garment.

Last year, she moved the Senate acknowledge anti-white racism and "It's OK to be white". 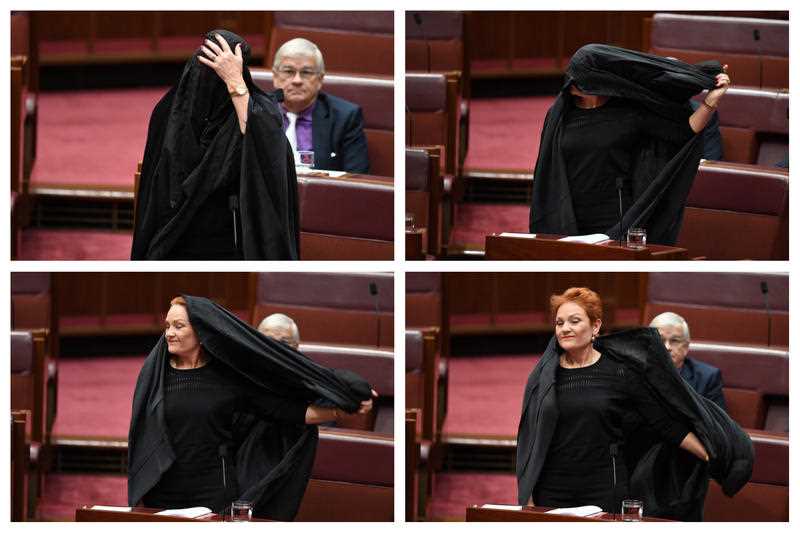 One Nation Senator Pauline Hanson takes off a burqa in the Senate.
AAP

And in March, One Nation's James Ashby and Steve Dickson were secretly recorded seeking donations from the US gun lobby and discussing weakening Australian gun laws.

Footage later emerged of Mr Dickson groping women and making racist comments at a US strip club. He subsequently resigned.

But, despite these controversies, ANU's Mr Frost doesn't believe Ms Hanson will be going away any time soon.

"[Ms Hanson] taps into the basest of our fears, especially around race. Part of Australia's history is a fear of other races ... that continues strongly within some communities."