Prime Minister Malcolm Turnbull has dropped a key component of the National Energy Guarantee amid speculation he may be challenged for the Liberal leadership.

Prime Minister Malcolm Turnbull has formally dropped a core component of his signature energy plan, abandoning the commitment to legislate a 26 per cent emissions reduction target in line with the Paris climate accord.

The prime minister said he was still committed to the Paris targets but his slim one-seat majority in the House of Representatives meant he could not impose a formal target on the energy sector until conservative critics in his own party room changed their position.

“The outstanding reservations of a number of our colleagues, combined with the absence of bipartisan support, mean that as long as that remains the case, we won't be in a position to take that legislation forward,” Mr Turnbull told reporters at Parliament House.

Labor maintains it is open to a deal but wants to see the wording of the actual legislation, which the government has not released. 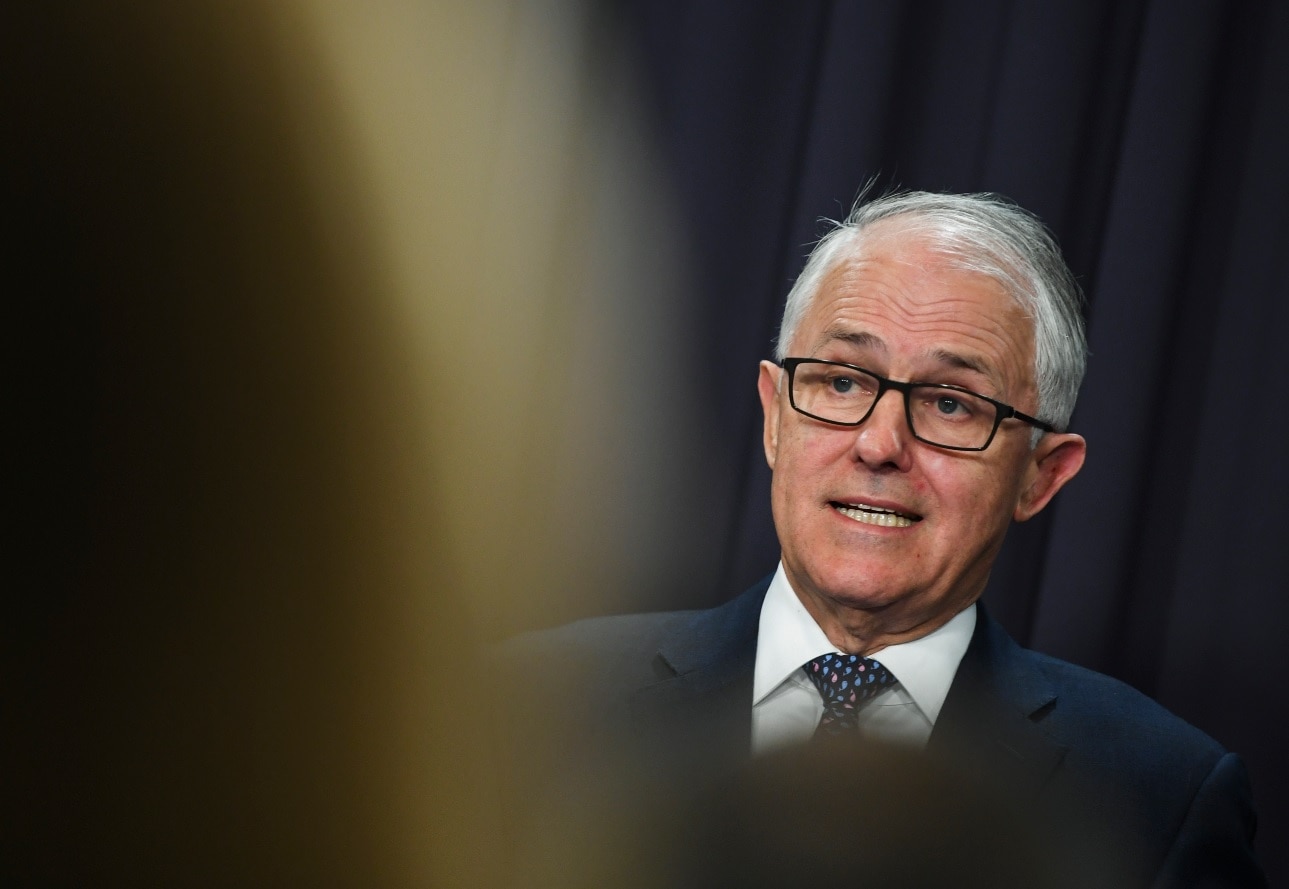 The backflip comes amid a flurry of speculation about a potential leadership spill, with reports Home Affairs minister Peter Dutton is considering a challenge.

Mr Turnbull said he had seen Mr Dutton at a meeting earlier on Monday morning. "He is a member of our team, he has given me his absolute support," the prime minister said.

The debate about whether to put the emissions target in law or in a more flexible regulation was now "moot", Mr Turnbull said, confirming the government would not progress with either for now. But he left the door open to re-attempting the targets when the numbers in the House were more secure.

Labor said the backflip was a "white flag" surrender to the right-wing of the party.

"Mr Turnbull has demonstrated that he is not the leader this nation needs. Real leadership is about fighting for the principles you believe in," opposition leader Bill Shorten said, while still promising to consider the final design.
0:00
Share

Mr Turnbull unveiled a suite of new measures aimed at appeasing internal critics of the policy on Monday morning.

The government will attempt to legislate new powers to threaten power companies with a “big stick” if they fail to bring down prices, including the ability to break up the generation and retail arms of energy giants as a “last resort”.

The Australian Energy Regulator will get extra funding to make it more of a “tough cop on the beat”.

The government will also back recommendations from the consumer watchdog, the ACCC, to create a fixed “price expectation” so consumers can more easily compare energy contracts.

Former Nationals leader Barnaby Joyce welcomed the new divestment powers as a "sword of Damocles" that could be used to pressure the big power companies.
Asked about the leadership, Mr Joyce said it was now time for "stability".
"You've had the battle, a position has been reached and I think it's a position - I'm absolutely certain - that I can sell back to my electorate."

Nationals backbencher Andrew Gee, who previously said he might cross the floor to vote against the energy bill, said he welcomed the government’s plan to “abandon” the NEG, but said it was “disappointing” it had taken so long.

Treasurer Scott Morrison later told Sky News his colleague was wrong to say the policy had been scrapped.

Senior cabinet ministers rallied around Mr Turnbull on Monday amid growing speculation he may face a leadership challenge, urging internal critics to “think about the consequences” of undermining the leader.

Cornered by reporters later in the day, Mr Spence said he would not comment on private discussions with MPs and would not be drawn on who he would prefer as leader.

It's understood Qld's LNP president Gary Spence has been contacting some federal MPs urging them to get behind Peter Dutton. He was asked about it at Qld Parliament:@abcnews pic.twitter.com/NGu34ic2ts

Mr Turnbull called an emergency cabinet meeting on Sunday amid reports some conservative backbenchers were urging Peter Dutton to challenge for the leadership.

Former prime minister Tony Abbott and other conservative MPs have been vocal in their criticism of the NEG, prompting the last-minute changes.

“There are some people who don’t support the current leader and that is quite obvious,” cabinet minister Christopher Pyne told reporters on Monday morning. The prime minister has my support: Peter Dutton

“We have the right policy mix and if we are united we will win the next election.”

Mr Pyne said some agitators were trying to “drive down the numbers in the polls” to justify a change in leadership. The latest Fairfax-Ipsos poll showed the Coalition falling against Labor to 45 – 55 on two-party preferred.

Education minister Simon Birmingham said the NEG still had “overwhelming” support of cabinet but warned the “handful” of individuals agitating for a leadership spill to “think about the consequences of continuing to cause that trouble”. Former prime minister Tony Abbott said the issue was about energy policy, not about personalities. “It’s not about him, it’s not about me,” he said.

Over the weekend it appeared the government would agree to place the 26 per cent target in a regulation rather than legislation - a step the Labor states had advocated so a future Labor government could more easily ramp the scheme up to its preferred 45 per cent target.

Liberal backbencher Craig Kelly, who has long backed Mr Abbott’s calls for more investment in coal-fired power, said he would not support the change.

“I do have some concerns about that,” Mr Kelly said. “You are giving a blank cheque to a future Labor government.”

Tasmanian Liberal senator Eric Abetz said he was "still grappling with" the prime minister's ongoing commitment to Paris. He said "whoever might be leader" of the party needed to "capture the public's imagination" by changing its policy on climate change and immigration.