As the Australian Electoral Commission considers the name and location of a new electorate, advocates are highlighting big disparities in who gets naming honours.

Gender equality advocates are calling for a new federal electorate in Victoria to be named after a woman, as they draw attention to the “incredibly stark” disparities in who is honoured and represented in Australia’s civic landscape.

Indigenous rights advocates Margaret Tucker and Aunty Eleanor Harding, war correspondent Louise Mack, feminist activist Zelda D’Aprano and Labor politician Susan Ryan are some of the women being put forward amid a campaign for the Australian Electoral Commission to “put her name on it”.

Public suggestions have been published online and are open for comment as the AEC considers the redistribution of Victoria’s federal electoral divisions, including the name and location of a new electorate being created in the process.

Did you know just 5 out of the 38 federal electoral divisions in Victoria are named after women? With a new electorate coming, let's name it after an incredible Victorian woman! @AusElectoralCom #PutHerNameOnIt #IncredibleVicWomen #Women4AECseats pic.twitter.com/EbvhLBhm5w

Clare Wright, professor of history at La Trobe University and a vocal supporter of the campaign for a female namesake, says only 11 per cent of the country’s 150 federal electorates are named after women.

Just one features the name of an Indigenous woman, with Lady Gladys Nicholls sharing the honour with her husband, fellow Aboriginal rights advocate Sir Doug Nicholls. Just six electorates in total are named after Indigenous people, male or female.

“They’re left out of the reckoning of who has made this country, who has contested the notions of what this country is about,” Professor Wright told SBS News.

And the historian said the problem wasn't just seen in the naming of our electorates, with Australia currently having more statues of animals than women. 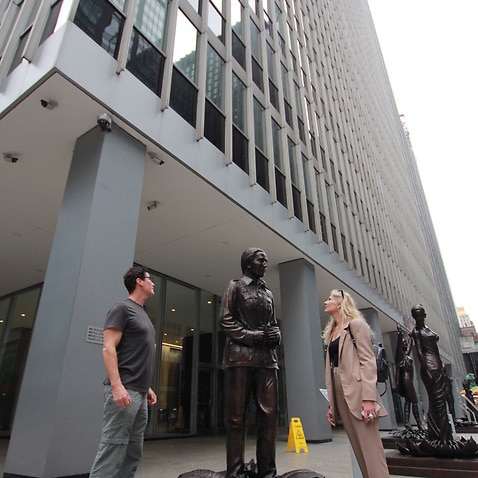 “This reflects really badly on us as a nation in terms of who we think belongs here, how easy or not easy it is for women and girls to identify themselves as part of our body politic, to see themselves reflected in the streets and the landscape and in the names of places, and buildings and bridges and banks, and all of these things have been named after men historically,” she said.

“You can understand perhaps why that existed in the past - but hey, it’s 2020, and these are the statistics that we are still facing.

"Women make up 51 per cent of the population but have these incredibly low percentages of representation in our civic landscape."

She said Ms Tucker was the most nominated person, with 41 submissions to the AEC putting her name forward.

Ms Tucker, who died in 1996, is said to be one of the country's earliest female Aboriginal activists.

Professor Wright said she worked alongside Sir Doug Nicholls and William Cooper, who have both rightly been honoured with Victorian electorate names, and there was no good reason why she shouldn't receive the same recognition.

Wouldn’t you like to vote in the division of TUCKER? Last day for public submissions to @AusElectoralCom. #democracy #crediblewomen https://t.co/wXrppRJg8O pic.twitter.com/wnA49LOt4A

"She played such an important role in the Indigenous community in Victoria and nationally in leading extraordinary campaigns for civil rights and social justice," Professor Wright told SBS News.

"The benefit that she has created through her lifetime of dedication and work are to the betterment of us all, because the country that she produced, the nation that she produced from her work, if a better nation than the one she came into."

Others to call for a Tucker electorate include Way Back When Consulting Historians, with the group arguing in a submission to the AEC that choosing a female First Nations Australian would be a powerful gesture.

"This redistribution process is an opportunity for the AEC to show that it recognises the importance of names and the power they hold," the submission says.

Margaret Tucker has been the most nominated person for the naming of the new Vic fed electorate with 41 submissions requesting the new division be named TUCKER. There were 27 individual women’s names submitted, 2.5 x that of men’s. #puthernameonit #crediblewomen @AusElectoralCom pic.twitter.com/Fkz8Hd0liR

"This is a chance to recognise the previously unrecognised, to acknowledge the important role that women have played in shaping the Australia that we have today and to honour and respect the role that women played, equally, alongside men."

But amid the campaign for a female namesake, both the Victorian branches of the Liberal and Labor parties in their submissions have suggested the new division be named after late former prime minister Bob Hawke.

"There is no doubt that Bob Hawke rendered outstanding service to Australia and the Victorian community, before and after entering politics, and especially during his time in office," the Liberal submission says.

Labor's submission says Mr Hawke was the longest-serving Labor prime minister and universally regarded as one of the country's most significant leaders.

However, Labor is also calling for the Victorian electorate of Gellibrand be renamed after the state's first and only female premier, Joan Kirner.

As @clareawright has pointed out, only 17 of our 150 Federal electorates are named in recognition of the contributions of a woman to our nation.

We can do better.

That’s why I have launched a campaign to convince the AEC to rename Gellibrand in honour of Joan Kirner. pic.twitter.com/u2mgK3N6lX

Federal Labor MP Tim Watts, who represents the Gellibrand electorate, this week argued that Joseph Gellibrand, John Batman's lawyer and the drafter of the Batman Treaty, was not an appropriate namesake in 21st century Australia.

"In the spirit of moving towards greater representation for women in this place, it should be named after a great Australian woman," Mr Watts said in parliament.

"Joan made outstanding contributions to the nation as a whole in the fields of politics, conservation and gender equality," he said.

Professor Wright said there was no reason why electorates couldn't be renamed, in line with present community values.

"We are voters in these electorates, and wouldn’t it be great if women could vote in an electorate that honours and celebrates the life of a woman who has gone before them," she said.

The historian said the "incredibly stark" gender name gap issue was about equality, parity and respect.