Prime Minister Scott Morrison says he has accepted Christian Porter's resignation from the federal cabinet, adding it is the "appropriate course of action". 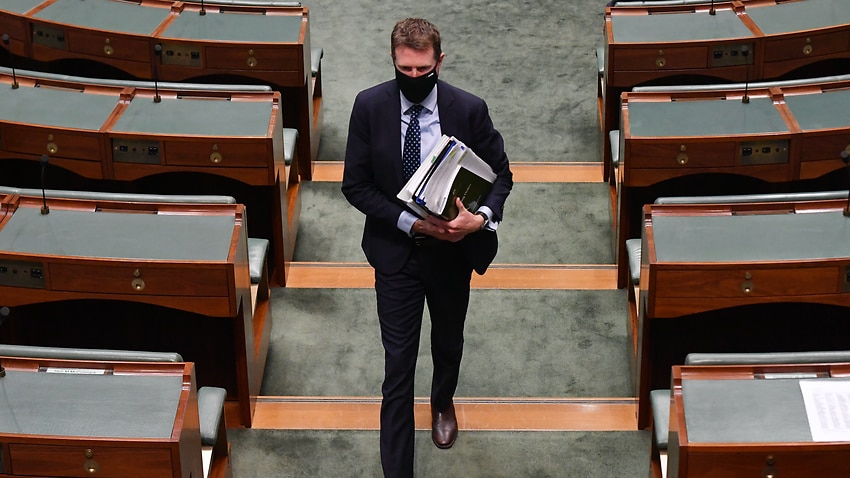 Minister for Industry Christian Porter has resigned from the frontbench. Source: AAP

Labor continues to apply pressure on Christian Porter's use of a trust fund to cover his legal fees and is pushing for greater transparency over the disclosure that led to his resignation.

Mr Porter resigned from the government frontbench on Sunday over his decision to accept anonymous funds from a blind trust to fund defamation action against the ABC.

Prime Minister Scott Morrison has said Mr Porter ultimately could not rule out a perception of a conflict of interest because he could not disclose who his donor was.

Shadow Attorney General Mark Dreyfus has demanded Mr Porter provide more answers around the source and amount received through the fund or hand in his resignation.

"This is not over," he told reporters on Monday.

“Mr Porter breached the ministerial standards by receiving a secret gift and he is in breach of the standards that apply to members of the Australian parliament.”

"The issue for the Prime Minister is about whether a minister is in a position to ensure that he can satisfy that he doesn't have a conflict of interest - perceived or otherwise," Mr Morrison said.

"The inability of him to be able to practically provide further information because of the nature of those arrangements - if he were able to do that, that would allow the minister to conclusively rule out a perceived conflict.

Mr Porter revealed earlier last week he had accepted a blind trust called the Legal Services Trust to help cover his legal fees for a defamation case against the ABC.

The former attorney-general sued the ABC in March over a story that revealed a now-deceased woman's historical rape allegation against a cabinet minister.

Mr Porter has strongly denied the allegation, with the defamation case being settled before trial.

In a statement, Mr Porter said he had considered the decision to resign from the federal cabinet very carefully.

"Ultimately, I decided that if I have to make a choice between seeking to pressure the Trust to break individuals’ confidentiality in order to remain in Cabinet, or alternatively forego my Cabinet position, there is only one choice I could, in all conscience, make. Consequently, I provided the Prime Minister with my resignation earlier today."

The Prime Minister said Mr Porter would remain on the backbench, while Energy Minister Angus Taylor would take over his portfolio in an acting capacity.

"Mr Porter, by taking the decision he has done today, that is the appropriate decision in these circumstances. That reinforces our government's commitment to those standards."

Deputy Prime Minister Barnaby Joyce has said he believes his colleague's resignation is right, but maintains he could still one day return to the frontbench.

"He has, like so many of us, gone to the corridor of the nearly dead," he told the Seven Network on Monday.