After almost two decades together same-sex couple Cas Willow and Heather Richards have tied the knot at a Melbourne hospital.

Melbourne couple Cas Willow and Heather Richards have been waiting years for same-sex marriage to become legal in Australia and having tied the knot, feel stronger as they face more challenges.

The women, together for almost two decades, wed on Monday during an emotional ceremony at Peter MacCallum Cancer Centre where Mrs Willow is receiving treatment for breast cancer that has spread to her brain.

"Just because time is not on our side, it's just a dream come true," she said of the wedding.

Her health outlook meant the pair, who are among the first same-sex couples to wed in Australia, were allowed to waive the mandatory four-week intention-to-marry period after laws passed federal parliament. "I can't believe it's real and it was something I thought I would never see," Mrs Willow said.

Her partner of 17 years Mrs Richards said she was overjoyed that they could finally call each other "wife and wife".

"She has always been there for me, she's been my partner in life, my confidante, my soul mate, my everything," Mrs Richards said.

"To now be able to carry on afterward and say she was my wife and not just my partner, it adds sort of completion to a relationship," she told reporters.

While the joyous wedding brought many guests to tears the couple were delighted with the support and love they had received from the community.

Mrs Willow, 53, and Mrs Richards, 56, don't need any toasters or kettles so they asked for wedding gifts to come in the form of donations to the Peter MacCallum Cancer Foundation, which hosted Monday's marriage. 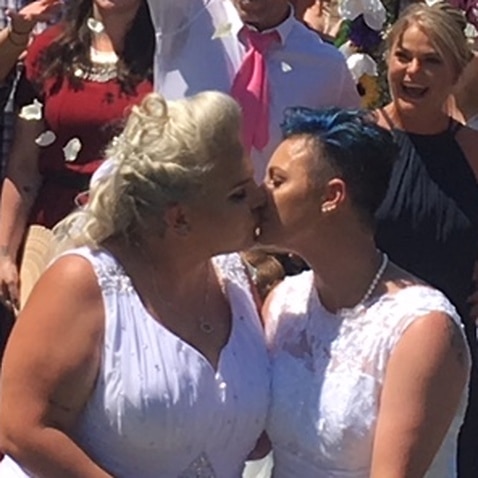 'It was so wonderful': First same-sex marriages take place in Australia

Premier Daniel Andrews, who attended the wedding, was quick to act, making a $50,000 donation on behalf of the government.

Same-sex couples married in Sydney, Melbourne and Western Australia on the weekend.

Lauren Price, 31, and Amy Laker, 29, became the first pair to legally marry in Australia on Saturday at Macarthur Park in Camden, Sydney.

They were given permission to marry before January 9 for financial reasons as Mrs Price's family had already paid to travel from Wales for the couple's long-planned civil ceremony.