The Senator's line of questioning received fierce criticism, with the nation's Race Discrimination Commissioner saying 'no Australian should be required to prove their loyalty'. 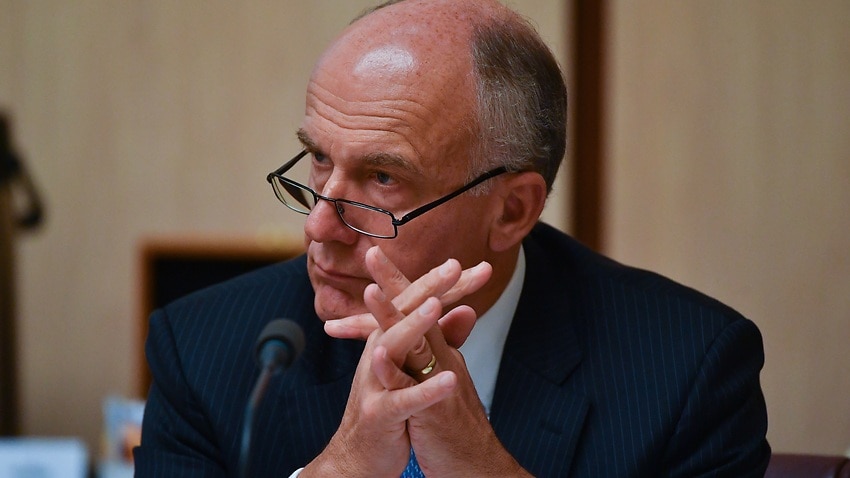 Australia’s Race Discrimination Commissioner has joined a wave of criticism against Liberal Senator Eric Abetz, after he asked three Chinese Australians testifying at a Senate Committee to denounce the Chinese Community Party.

On Wednesday, the Senate committee examining issues facing diaspora communities in Australia heard from Yun Jiang, Osmond Chiu and Wesa Chau, who told the inquiry many Chinese Australians feel intimidated in speaking out on issues concerning their community and their country.

Following their opening statements, Senator Abetz asked all three witnesses if they were prepared to “unconditionally condemn the Chinese Communist Party dictatorship”.

The line of questioning received a swift backlash on social media, and was criticised by Australia’s Race Discrimination Commissioner Chin Tan.

"No Australian should have their loyalty to this country questioned or undermined because of their ethnic origin, nor should they be required to prove their loyalty,” Commissioner Tan said.

"Treating people prejudicially based on race or ethnicity is contrary to Australian democratic values of equality, and to our fundamental human rights.”

In her opening statement, Ms Jiang had told the hearing many in the Chinese diaspora felt unable to take part in public debate around Australia’s China policy, in part because they may draw accusations of disloyalty from Australians.

Many were also afraid to speak out, fearing consequences for family members in China.

“Clearly, he did not take that into account at all and just repeated the exact behaviour that I said was concerning,” she said.

Ms Jiang responded to Senator Abetz’s question by saying she condemned the “grievous human rights abuses” committed by the Chinese Government, but also remarked it was not fair out to force all Chinese Australians to clarify their political position.

So did anyone else got asked to condemn the CCP in the senate inquiry on diaspora issues, or was it just Chinese-Australian individuals?

Mr Chiu, a research fellow at the progressive Per Capita think tank, told the inquiry he did not support the Communist Party.

“It felt a bit surreal. The best comparison I can think of the top of my head is it like an inquisition or show trial,” Mr Chiu said.

“I think it says a lot if Chinese Australians can’t even appear before a Senate committee without their loyalty being questioned.”

Ms Chau, a Labor candidate for Melbourne’s deputy mayorship, voiced her disappointment that Chinese Australians had been singled out to denounce the regime, asking Senator Abetz if his allegiance to Australia had been questioned because he was born in Germany.

“Have you not read the terrible trolling that I receive? I am astounded that you would ask that question.”

Senator Abetz said other ethnic groups have faced similar questions, saying Italian Australians are often asked if they are “part of the Mafioso".

His comments drew agreement from Senator from fellow Liberal Senator Concetta Fierravanti-Wells, who told the inquiry "there is an overwhelming under-desire among people from the Chinese Australian community to participate in politics".

Following her appearance, Ms Chau described the questioning on display as “race-baiting McCarthyism”.

Senator Abetz defended his line of questioning on Thursday, arguing his request for witnesses to denounce the Communist Party had “nothing to do with race and everything to do with values".

“At no point did I question the loyalty of anyone - I did not even mention the word ‘loyalty’,” he said in a statement.

“If Mr Chiu, a prominent Chinese-Australian from a 'progressive' think tank … cannot bring himself to denounce a regime that continually and systematically commits human rights abuses, there is no hope for the Chinese diaspora in Australia to speak out.”

My views on China are on the record but I’m not gonna be goaded by a right-wing Senator into a gotcha loyalty test. This was a Senate inquiry into issues facing diaspora communities but instead of addressing complex issues respectfully, all we received was bullying & nasty tirade

Labor Senator Penny Wong said she would not “tolerate the loyalty or value of some Australians being questioned because of their ethnic origins.”

“In a world where authoritarianism and nationalism are rising, we cannot afford to be complacent about safeguarding our democracy and we cannot allow any ethnic groups to be targeted.”

“The behaviour of certain committee members towards Australian citizens yesterday was against these interests.”

Mr Chiu and Ms Chau both told SBS News they would like to see an apology from the Senator.

“If he’s not going to do so, I can only hope that the Prime Minister intervenes because otherwise it signals that Senator’s behaviour is tolerated,” Mr Chiu said.