Chinese officials have hit out at the United States, accusing the country of having severe problems with racism and police violence.

"Black people's lives are also lives. Their human rights must also be guaranteed," foreign ministry spokesman Zhao Lijian told reporters in Beijing, referring to the death in custody of George Floyd in Minneapolis.

"Racism against ethnic minorities in the US is a chronic disease of American society," Mr Zhao added.

"The current situation reflects once more the severity of the problems of racism and police violence in the US." Chinese diplomats and state media have seized on the violent unrest sparked by the death of Mr Floyd to accuse the US of hypocrisy and compare American protesters with pro-democracy demonstrators in Hong Kong.

Beijing has long been infuriated by criticism from Western capitals, especially Washington, over its handling of the protests that shook Hong Kong last year.

Mr Zhao on Monday said the US government's response to protests at home was a "textbook example of its world-famous double standards."

"Why does the US lionize the so-called Hong Kong independence and black violence elements as heroes and activists, while calling people who protest against racism 'rioters'?" Mr Zhao asked. 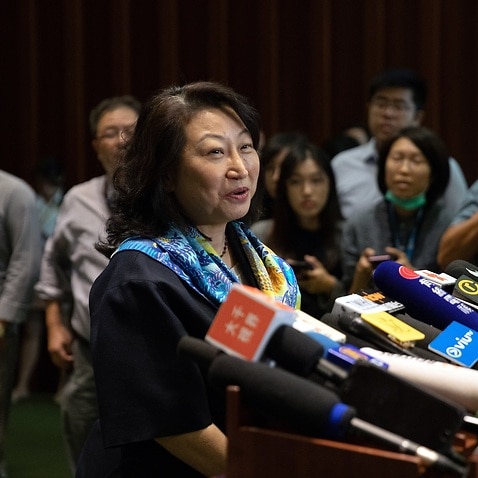 China has insisted that "foreign forces" are to blame for the turmoil in Hong Kong, where pro-democracy protesters - described by Beijing as rioters - have marched in the millions since June last year and often clashed with the police.

Beijing sparked outrage and concern earlier this month with a plan to impose a national security law on Hong Kong that it said was needed to curb "terrorism".

It was condemned by pro-democracy activists and Western nations as another attempt to chip away at the semi-autonomous city's freedoms. "I can't breathe," she said on Twitter, with a screenshot of a tweet by US State Department spokeswoman Morgan Ortagus that had criticised China's policy in Hong Kong.

Ms Hua was quoting the words Mr Floyd was heard saying repeatedly before his death - after a police officer knelt on his neck for nearly nine minutes.