Refugee advocate Shukufa Tahiri says she is honoured to be named as a "woman of influence" and says it will spur her on to continue her work changing peoples' attitudes towards refugees and asylum seekers.

Twenty-four year-old Shukufa Tahiri has been named one of Australia's most influential women for her refugee advocacy work.

In its seventh year, the 100 Women of Influence Awards recognises the achievements of women who have overcome adversity to reach a position of influence. 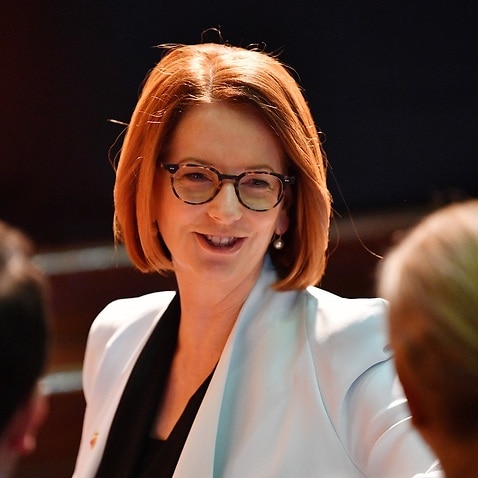 Women cannot sit back and wait for a more equal world: Gillard

As a 12-year-old, Shukufa arrived in Sydney in 2006 through the refugee resettlement program.

Her first thought upon arriving was "home at last".

“I was thinking my family is safe and that we have an educational opportunity," she said.

“I don’t remember much from the evening, but I do remember impatiently waiting for the sun to rise. For me, it was important to be able to see the light of day.”

A six-year journey fleeing the Taliban with her family took her from Afghanistan to Pakistan before reaching Australia.

“We fled the Taliban rule, they were infiltrating villages. They were executing people. We fled for safety,” she said.

“The journey of escaping Pakistan was a very difficult and uncertain. We spent two weeks on the road from Afghanistan to Pakistan. Then in Pakistan we were in a refugee enclave for six years before coming to Australia.”

The first order of priority was registering for school - and the learning curve would be steep.

Learning English would be the first challenge and then filling in the gaps in education was another. But it was identity challenge which took a while to work out.

“Understanding whether I was Australian from then, you know my background being born in Afghanistan, then going to Pakistan. Which identity was mine? Where did I stand in terms of my belonging?”

“In the high school context, it was very difficult to navigate so many challenges and barriers at the same time. High school was a roller coaster until I graduated.”

Fast forward 12 years and Shukufa Tahiri has started a number of social enterprises, including a free driving mentorship program for refugee women.

She works as a policy assistant at the Refugee Council of Australia while also studying law.

Her report on the experience of refugees accessing assistance through government-funded employment services led to changes in service delivery.

Judges looking for courage and resilience Rosie Batty is one of the '100 Women of Influencers' for her work to prevent domestic violence.
AAP

Entrants this year were asked to demonstrate self-leadership qualities - such as courage, resilience and self-development - acquired from overcoming challenges.

Responsible for compiling the list is the Financial Review.

The newspaper’s editor-in-chief Michael Stutchbury said there is one thing common to all the winners.

“One of the common threads that run through this year’s winners is that they’ve come from a place of adversity and hardship,” he said.

“But rather than giving up and being beaten down by their experiences, they have used them for the greater good so that others don’t find themselves in the same situation.”

Seeing the looks on the women’s faces solidified the importance of Ms Tahiri's work.

“To take them to learner driver test, it was a huge obstacle for them. And once people get their licences, once they get behind wheel, it symbolically gives them a sense of empowerment - especially for the women who come from Afghanistan and Pakistan - who have never driven in their lives before," she said.

Today I was named as one the 100 Women of Influence 2018 by The Australian Financial Review and Qantas.

I am so honoured, delighted and truly humbled to be chosen alongside such inspirational and accomplished women.

She said comparison with Malala Yousafzai, who also escaped the Taliban, makes her uncomfortable.

But she acknowledges she shares some affinity with the youngest Nobel Prize laureate in her driving desire to give back and help others.

“I think that a large part of being recognised for anything, and I think the same is true with me, is that it increases the expectation, obligation and responsibility for me to do better for the community, for the Australian society, and the whole world at large.

She said she hopes her story does inspire others.

“I want to be a positive role model for people who want to pursue their goals and visions. To empower people, women, girls to move beyond what they expected to do.

“To tell people: as long as you have the capacity to learn and grow, you are able to achieve everything. It is about the work and effort you put into something. It is the grit and perseverance that will define to what extent you reach your goals.”

Changing attitudes towards refugees is also a key part of her work.

“I would like to influence people to see beyond categories, beyond labels,”

“Asylum seekers and refugees are not victims, they are people who are misplaced from their homes.”

The award ceremony is scheduled for October 17.

The full list of winners can be found here.