Refugee footballer Hakeen Al-Araibi is on his way home to Australia after being released from detention in Thailand.

Al-Araibi is expected to touch down in Melbourne about 1pm on Tuesday after spending more than two months in a Bangkok prison.

The Bangkok Post tweeted on Monday night that he was expected to be on a Thai Airways flight arriving at 1.05pm on Tuesday.

Reporters wait for #Hakeem al-Araibi at Suvarnabhumi airport. The refugee footballer is expected to leave Bangkok for Melbourne on Thai Airways flight TG465 departing at 12.05am. #SaveHakeem pic.twitter.com/31espIgFgC

'"He is on his way to the airport, the next step is for him to return home." 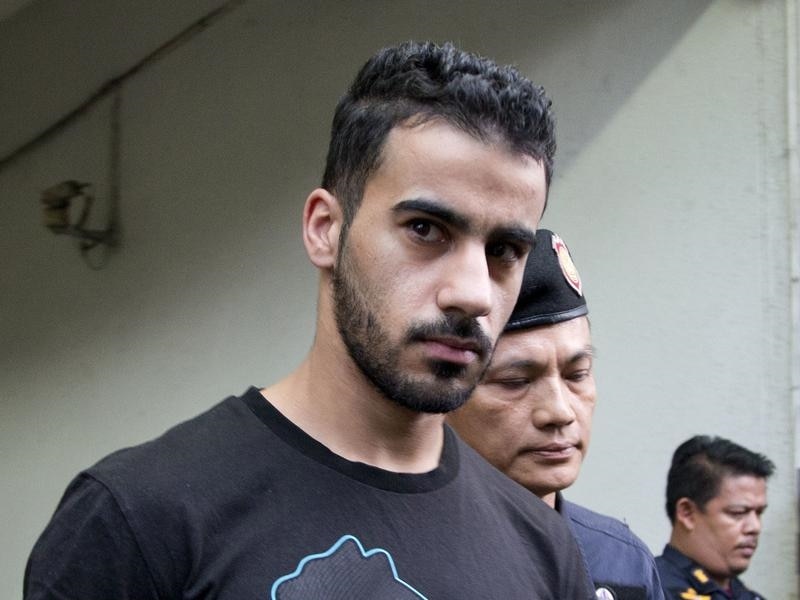 An official from the Thai attorney general's office, Chatchom Akapin, said on Monday Bahrain had requested the case be dropped after it had sought his extradition.

Al-Araibi was wanted by Bahrain after fleeing the country when he was charged with vandalising a police station in 2012. He was sentenced to 10 years in jail in absentia.

The Thai Foreign Ministry later refused to give details of why Bahrain asked for the case to be dropped. However, Bahrain state media reported on Sunday that Prime Minister Khalifa bin Salman al-Khalifa spoke on the phone with Thai Prime Minister Prayut Chan-o-cha.

But after Al-Araibi's release on Monday, Bahrain's Foreign Ministry said in a statement the 10-year jail sentence remained in place and reaffirmed the country's right to "pursue all necessary legal actions against him".

"We greatly appreciate their listening to the issues that have been raised by our government and many others who have raised this case," Mr Morrison said.

Al-Araibi, 25, was detained at Bangkok airport on November 27 when he arrived in Thailand for his honeymoon with his wife.

The arrest was made after Bahrain issued an Interpol Red Notice for his detention on November 7. Australia came under fire for passing on the notice to Thai authorities before his arrival.

He had faced at least another two months in jail after a court in Bangkok last week set down his pre-trial extradition hearing for April 22. “They have to send him home as quickly as possible.”

Former Socceroo Craig Foster tweeted, "thanks go to the wonderful people of Thailand for your support and to Thai Government for upholding international law".

We understand that @prayutofficial Govt and court has ruled to release Hakeem. My thanks go to the wonderful people of Thailand for your support and to Thai Govt for upholding international law. My deepest gratitude. Also to everyone who stood for what’s right 👏 #Hakeemhome

Most important thing now is Hakeem’s immediate wellbeing. Sure Embassy staff will take care of him, there’ll be tears there tonight, as there are in our household right now. Going to take some moments to thank as many of the incredible people involved as possible ✊ #SaveHakeem

Al-Araibi fled Bahrain in 2014 and was granted refugee status by Australia where he plays soccer for semi-professional Melbourne club Pascoe Vale. Football Federation Australia thanked Foster as well as the Australian and Thai governments.

"The football family looks forward to welcoming Hakeem home and providing him with ongoing support after such a difficult period," chairman Chris Nikou said.

Sayed Ahmed al-Wadaei from the London-based Bahrain Institute for Rights and Democracy said the decision was a huge victory for the human rights movement in Bahrain and the rest of the world.