Employer groups are resisting a push from unions and Labor to give the lowest-paid workers a wage rise.

Restaurant and cafe owners have called for a freeze on the minimum wage, as employer groups and the Prime Minister warn a union push for a "living wage" would cause job losses.

That is effectively a real wage cut given the annual increase in cost of living. 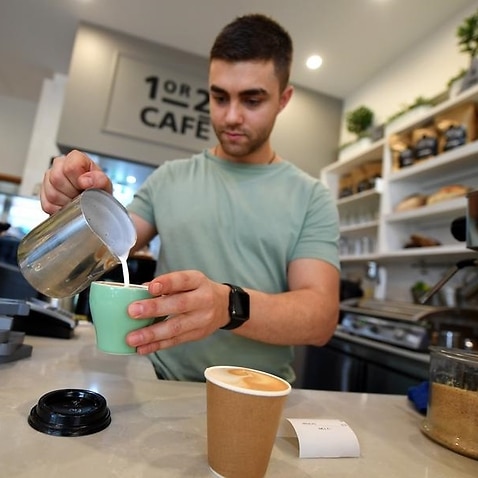 The Retailers Association is supporting a 1.8 per cent rise, the equivalent of $12.95 extra a week.

That falls well short of the Australian Council of Trade Unions' call for a $43-a-week increase to lift workers out of poverty.

Restaurant and Catering Australia chief executive Juliana Payne said her members could not afford to pass on another pay rise after two consecutive years of above-inflation increases. She said 35,000 of their members were owner operator businesses.

"Every increase either means they either have to put up their prices for their customers or they need to pay themselves less, because if they can't put their prices up because it's very competitive they just need to take home less money themselves because they have to pay their staff first," Ms Payne told SBS News.

Labor has signalled it will change legislation to compel the Fair Work Commission to increase the minimum wage to a "living wage", but hasn't detailed its plan.

Prime Minister Scott Morrison repeated his warning on Thursday that Labor's plan would force employers to cut jobs in order to pay higher wages for others.

Business Council of Australia CEO Jennifer Westacott warned that small businesses will feel the ramifications of any political decisions.

"If their businesses aren't successful or they can't increase their success and they're paying higher wages to people then they've got three choices - they sack people, they put their prices up for consumers or they pay themselves less."