A report has found right-wing groups have been primarily responsible for spreading online disinformation about the coronavirus pandemic.

Right-wing voices around the world have been playing a disproportionate role in spreading coronavirus misinformation and conspiracy theories, a new report has found.

The report by Graphika, a US-based company specialising in online marketing and social media analysis, is based on a project mapping online COVID-19 misinformation.

The company’s work - based on data collected primarily from Twitter in January, February and March - found right-wing voices, partly fuelled by a “mega cluster” in the United States, spread nearly four times as much disinformation as left-leaning voices. “This indicates not only that there are more right-wing accounts, but these accounts are also more prolifically producing content than their left-wing counterparts.”

Right-wing groups in the US, Italy, and France were more actively spreading misinformation, with left-wing groups more active in other EU countries and Latin American countries, the report said.

Graphika's analysis found “a high proportion of conspiracy-focused content” online, which at first appeared to revolve around the causes of the coronavirus outbreak, but later shifted towards government responses.

“As the pandemic continued to spread to geographies in which communities that support these theories are particularly strong, conspiratorial content has become more closely focused on governmental responses to the outbreak,” the report said.

The report also found a number of groups have been attempting to leverage the online conversation around the coronavirus pandemic to cultivate racism and anti-immigration sentiment.

“Some of these communities focus upon the origins of the outbreak to spread anti-Chinese content, but the French and Italian right-wing are determined to draw attention to immigration policy in their respective countries,” the report said.

“This content is most often shared via articles on clickbait ‘news’ sites and expertly blends conspiratorial narratives with anti-establishment messaging.” 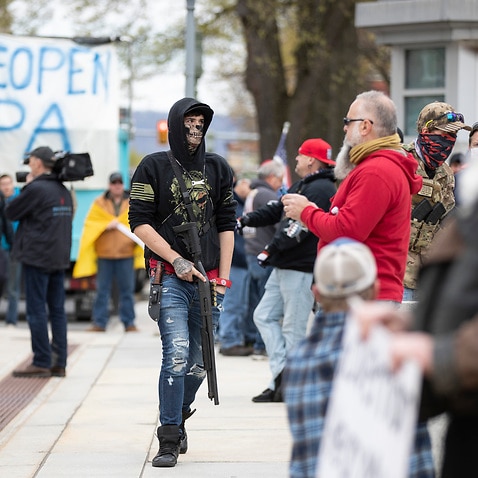 Earlier this week, experts told SBS News some white supremacists and neo-Nazi groups in Australia have welcomed the coronavirus, praising the closing of borders and hoping it will bring about a "societal collapse".

The World Health Organization has repeatedly referred to the coronavirus outbreak an “infodemic”.

“We’re not just fighting an epidemic, we’re fighting an infodemic,” WHO Director-General Tedros Adhanom Ghebreyesus told a gathering of security experts in February, where he also said misinformation was spreading “faster and more easily than this virus”.

The WHO has set up a “myth busters” page on its website to debunk common COVID-19 misconceptions.