Scott Morrison has again defended Australia's track record on climate action after coming under sustained pressure from allies to do more to reduce emissions. 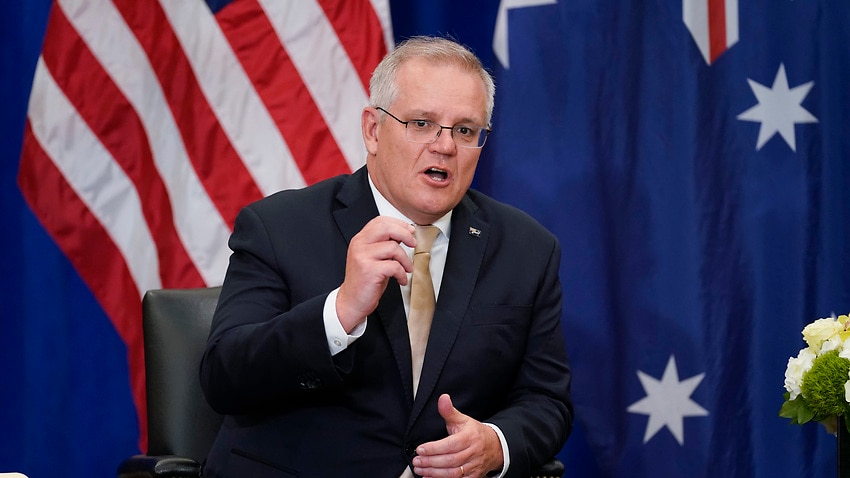 Prime Minister Scott Morrison has insisted Australia is doing enough to reduce emissions as he met US President Joe Biden ahead of climate talks between world leaders.

Australia is under increasing global pressure to update its emissions reduction targets and commit to achieving net zero by 2050.

The US has been among nations publicly urging Australia to lift its current target of reducing emissions by between 26 and 28 per cent on 2005 levels by 2030. The President brought US climate envoy John Kerry to the meeting with Mr Morrison.

Mr Biden described the two countries as working in lockstep to address challenges including climate change.

Earlier, Mr Biden told the United Nations General Assembly the world was fast approaching the point of no return on climate and pledged to increase US aid.

"I meant what I said. We are at an inflection point, things are changing. We either grasp the change and deal with it, or we're going to be left behind - all of us," he said as he sat alongside Mr Morrison after the address.

UK Prime Minister Boris Johnson is calling for stricter targets to cut emissions, urging humanity to "grow up" and stop "trashing the planet".

Mr Morrison indicated Australia would update its climate commitments ahead of UN talks in Glasgow in November.

"Our achievements in reducing emissions is an important story for Australia to continue to tell," he told reporters.

"We will continue to work on our plan as to how we can continue to reduce emissions to zero well in the future.

"Because in Australia it's not enough to have a commitment to something. You've got to have a plan to achieve it."

A deep schism over climate action has hobbled progress within the Coalition government, amid rising concerns insufficient action poses a risk to Australia's foreign trade.