Former prime minister Malcolm Turnbull warns the repercussions from tearing up a submarine contract with France is likely to “dog our relations with Europe for years”. 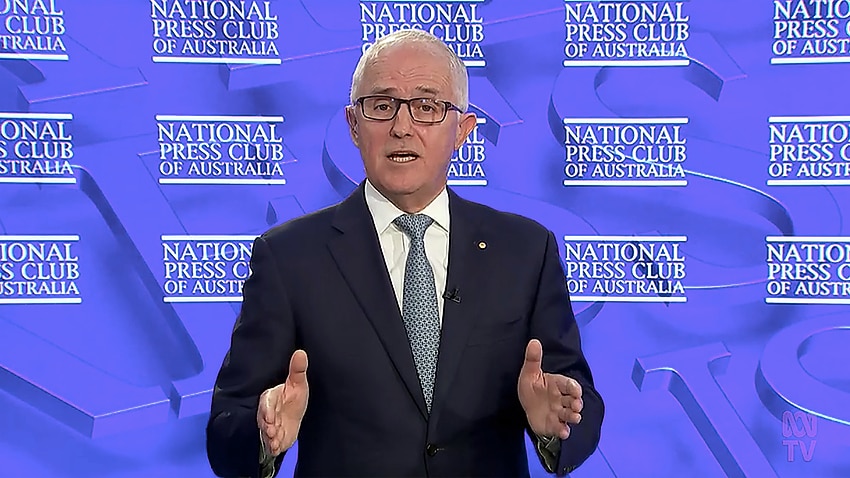 Malcolm Turnbull has gone nuclear on Scott Morrison in a weapons-grade attack over the scrapped French submarine deal.

The former prime minister launched a series of bombs in an explosive National Press Club speech aimed squarely at his predecessor.

Australia scrapped a $90 billion contract with French company Naval Group in favour of exploring nuclear-powered submarines in a deal with the United Kingdom and the United States.

The decision sunk diplomatic relations between Canberra and Paris to rock bottom, but Mr Turnbull warned of even more serious flow-on effects.

"This is an appalling episode in Australia's international affairs and the consequences of it will endure to our disadvantage for a very long time," he said on Wednesday.

He said the Australian government treated the French with contempt by not telling President Emmanuel Macron a nuclear option was being explored.

"This betrayal of trust will dog our relations with Europe for years," Mr Turnbull said.

"It won't be forgotten. Every time we seek to persuade another nation to trust us, somebody will be saying 'remember what they did to Macron'."

"If they can throw France under a bus, what would they do to us?"

Mr Turnbull revealed he had spoken to Mr Macron - who is refusing Mr Morrison's calls - after the decision.

He said statements about the French being "stabbed in the back" were widely held throughout the government.

"What it tells you is that Australia can't be trusted. When you conduct yourself in such a deceitful manner internationally, it has a real impact on Australia," Mr Turnbull said.

The Morrison government argues it kept negotiations with the US and UK secret to protect Australia's national interest, which would not have been served through French diesel-powered boats.

"You are playing for keeps in international affairs, and throwing your reputation for being trustworthy away is a terrible, terrible mistake," he said.

Mr Turnbull said Australia was walking into the most potentially dangerous form of propulsion without civil or naval nuclear expertise.

"The fact that there was no discussion and this extraordinary deceit that was practised, it has left us with so many unresolved questions," he said.

He said anyone - including Labor - who questioned the decision were accused of being unpatriotic.

"I am not getting any lectures on patriotism from Scott Morrison," Mr Turnbull said.

"I defended the national security of this country and its national interest and I know the way that he has behaved is putting that at risk."

Mr Turnbull, whose government signed the deal with Naval Group in 2016, denied the agreement had blown out in cost from $50 billion to $90 billion.

He argued the initial figure was a cost estimate that included the weapons system, a new dock in Adelaide and other items, while the higher amount was related to the 35-year life of the program.