The prime minister has released a three-stage "road map" to guide Australia out of coronavirus shutdowns.

The federal government has outlined a three-stage plan to allow businesses to reopen, large gatherings and interstate travel by the end of July with Prime Minister Scott Morrison declaring it's time to "get out from under the doona".

Households will also be able to host five people at home and local and regional travel will be permitted.

"Today, we move ahead with reopening our economy and our society, with a clear plan, and a clear framework, that shows Australians the road ahead," Mr Morrison said following Friday's national cabinet meeting with state and territory leaders, which will meet every three weeks to review progress. 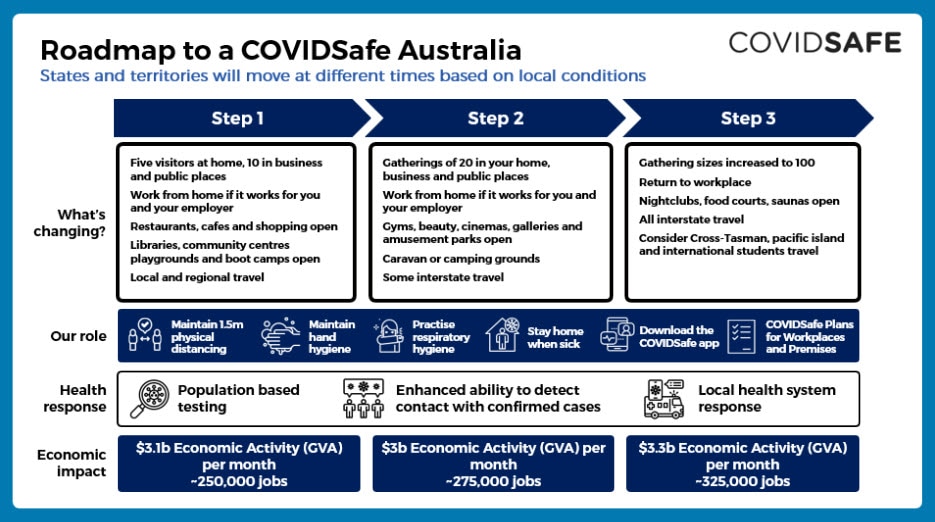 While the prime minister wants the country to reach stage three in July, states and territories will determine exactly when the restrictions should be peeled back.

Explaining the plan, chief medical officer Brendan Murphy clarified that under stage one, cafes and restaurants would still have to abide by the 10-person limit, meaning many "won't be able to open".

"But many doing takeaway may want to put up enough distance tables to start gently serving 10 people at a time," he said, adding that the same limit applies to libraries and community centres.

The second stage of the framework will see gatherings of up to 20 people allowed, the reopening of gyms, beauty salons, community sport, cinemas, galleries, and amusement parks, and some interstate travel allowed.

By July, Mr Morrison said he hopes to have moved through stages one and two and be ready to implement the final stage of the plan, which sees "most workers" back in the workplace, pubs and clubs reopened, gatherings of up to 100 people and all interstate travel.

By this point, international travel to New Zealand and the Pacific Islands and some exemptions for international students will also be considered.

There are no plans to restart broader international travel, however, with Mr Morrison stating: "I can't see it happening any time soon."

The prime minister last week announced that the discussion of whether to reconsider coronavirus restrictions would be brought forward, stating that "Australians deserve an early mark for the work that they've done".

Revealing the plan, he conceded that there would be some inconsistencies in how and when the measures were adopted by the states and territories.

"States will and must move at their own pace, and will cut and paste out of this plan to suit their local circumstances," he said, but flagged that he expected some state and territory leaders to make announcements regarding restrictions "later today".

He said Western Australia, South Australia and Northern Territory are already at stage one.

"But those on the east coast, a very different situation. They all got different starting points. The whole country has the same end point, to get to a COVID-safe economy." 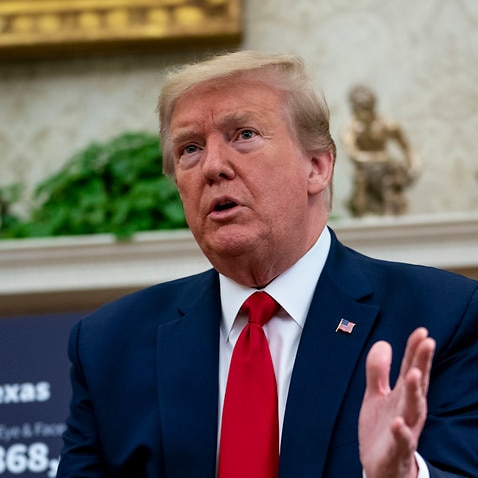 Queensland Premier Annastacia Palaszczuk said on Friday that step one of the plan, including larger gatherings and the reopening of some businesses, would be introduced Saturday week.

South Australian Premier Steven Marshall announced a range of COVID-19 restrictions would be lifted from Monday.

Outdoor dining, community centres and sports training will resume, more people will be able to attend funerals and universities and TAFE colleges will also be allowed to resume face-to-face learning in the state.

While Victorian Premier Daniel Andrews said he would make an announcement on Monday.

On Friday, New South Wales, which has been hardest hit by the virus, reported only four new cases in the past 24 hours.

However, two significant clusters at a Melbourne meatworks and Sydney nursing home are still resulting in new cases, including 13 new cases in Victoria.

Professor Murphy urged all Australians to continue "doing their bit" to manage COVID-19, which is still being transmitted in Australia, including staying 1.5 metres away from other people and keeping up strict hand hygiene.

"We've got very low case numbers, but the virus is still there, it's still in our community," he said.

"That's why, despite our very good position, we've got to be very cautious and wary with our next steps."