The prime minister said he will 'not be signing a blank cheque to targets without plans', in response to the stark findings of the UN body's report outlining the need for urgent action to address global warming. 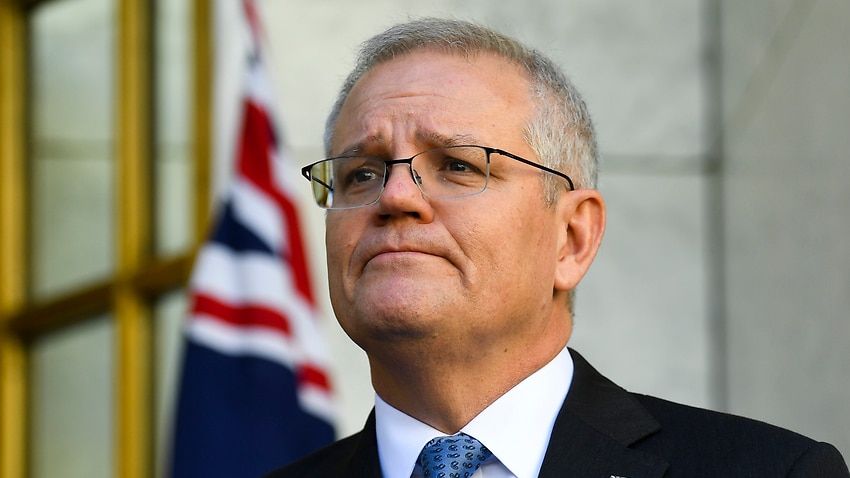 Mr Morrison fronted a press conference on Tuesday to address the findings of the UN's Intergovernmental Panel on Climate Change’s report, outlining the need for urgent action to address global warming.

Asked whether Australia will take a more ambitious 2030 target to the UN climate summit in Glasgow in November, the prime minister said its intentions would be made clear ahead of the crucial meeting.

“We will meet and beat our targets,” he told reporters in Canberra.

“We will update what we expect to achieve by 2030, as we always do, and we will make that very clear."

The spotlight on Australia's approach to climate change has intensified after the new landmark report warned human activity is changing the climate in unprecedented ways.

Mr Morrison has stressed he is committed to action on climate change, but said regional Australia would not be made to carry the burden of driving down emissions.

"I won't be signing a blank cheque on behalf of Australians to targets without plans," he said.

“I will not be asking people in the regions of this country to carry the burden for the country alone."

The latest report warned the rise in global temperatures will hit 1.5 degrees between 2030 and 2040, and warned the warming planet increasing extreme weather events.

However, the report does say that if immediate, large-scale cuts to emissions are made now, the curve will eventually bend to a level considered acceptable under the Paris Agreement.

UN Secretary-General Antonio Guterres has described the report as a "code red for humanity".

“This report must sound a death knell for coal and fossil fuels before they destroy our planet,” he said.

'We are not on track'

The report's findings have put Australia’s approach to reducing emissions under a renewed microscope.

Read More
The Earth's most sobering climate report card yet is in. Here’s what you need to know

Australia has not set a deadline to reach net zero, but the federal government says it will get there as soon as possible and preferably by 2050.

Many international counterparts have committed to net zero by 2050 and others, including the United States and United Kingdom, have recently substantially increased the ambition of their 2030 targets.

The Australian government has committed to cutting emissions by 26-28 per cent on 2005 levels by 2030 under the Paris Agreement.

ANU Climate Change Institute Professor Mark Howden, a contributing author to the IPCC report, has warned Australia this action is not enough.

"We are not on track to meet those emission reduction targets that keep the climate within reasonable manageable bounds,” he told SBS News.

Professor Howden said Australia’s approach was not consistent with the goal of the Paris Agreement to prevent a global temperature increase beyond 1.5-2 degrees Celsius.

“We can choose the climate future that we land in - the ball is in our court,” he said.

“There is hope we can change the future we end up with.”

World leaders have weighed in on the report, saying they hope it encourages more ambitious targets for global action on climate change.

British Prime Minister Boris Johnson said he hoped the report would be "a wake-up call for the world to take action now, before we meet in Glasgow".

US President Joe Biden also tweeted: "We can’t wait to tackle the climate crisis. The signs are unmistakable. The science is undeniable. And the cost of inaction keeps mounting."

Mr Morrison later said he recognised the 'serious implications' of the warnings outlined in the IPCC’s report, but has stopped short of committing to new measures to reduce emissions.

He added that it could not be ignored that the developing world accounts for two thirds of global emissions and "those emissions are rising".

"It is also a clear fact that China's emissions account for more than the OECD combined," he said.

Labor’s Senate Leader Penny Wong said Australia had an “obligation” to take action and accused the government of refusing to “shoulder responsibility”.

“The race against climate change is one we have to win,” she said.

“Other countries are stepping up to the plate and Scott Morrison is refusing to do so,” he said.

Mr Morrison has reaffirmed his government’s commitment to a technology-driven approach to bringing down emissions.

“We need more technology and no-one will be matching our ambition for a technology-driven solution. Because I believe that's what will work,” he said.