Prime Minister Scott Morrison was asked to guarantee JobSeeker payments for the unemployed will continue to be paid above the 'poverty line'.

Prime Scott Morrison has given his strongest indication yet that JobSeeker payments for the unemployed will continue to be paid at an elevated rate beyond this year.

Uncertainty over the future of the welfare payment - boosted by an income supplement during the COVID-19 pandemic set to expire on 31 December - has remained a prevailing concern for recipients of the support.

During Question Time on Tuesday, the Prime Minister responded to warnings against a return of the rate to pre-pandemic levels of $40 a day, saying recipients should expect some part of the supplement to continue.

"I have been clear that people can expect the supplement going forward beyond the end of this year," he told parliament on Tuesday.

"We expect the new JobSeeker rate will be lower than what it is right now ... it should be higher than the old Newstart rate." Prime Minister Scott Morrison says JobSeeker recipients 'can expect' a supplement to welfare support to continue beyond this year.
AAP

Mr Morrison's answer came in response to a question from Independent MP Andrew Wilkie, who demanded a guarantee that the rate would continue to be paid above the "poverty line" and at no less than the "current JobSeeker rate".

The supplement was cut at the end of September to $250 a fortnight until 31 December, from $550 a fortnight at the height of the pandemic.

Mr Morrison said the government would continue to consider the precise "level and arrangements" of the income support payment over coming weeks.

1.1 million kids now live in poverty. If the Govt. goes through with plans to cut income support payments back to $40/day it will push already desperate families closer to the brink. Every child deserves a safe secure home & enough to eat. #RaisetheRateforGood #EndChildPoverty pic.twitter.com/LVywSbJ9H0

The federal budget predicted unemployment will peak at a rate of eight per cent in the December quarter of this year, before falling to 6.5 per cent by the June quarter of 2022 as economic activity recovers.

Mr Morrison said a decision on the ongoing arrangements for the COVID supplement beyond December would be made before parliament rises - with its last day currently set for 17 December.

He previously said the government was "leaning in" to keeping the JobSeeker rate at an elevated level.

The speculation over the income support program comes after Treasury officials downplayed the number of new jobs set to be created by the federal government's $4 billion JobMaker hiring credit.

Officials told a Senate estimates committee on Monday the program would create 45,000 "genuinely additional" jobs - just 10 per cent of the 450,000 Treasurer Josh Frydenberg boasted on budget night would be supported by the wage subsidy program for under 35-year-olds. 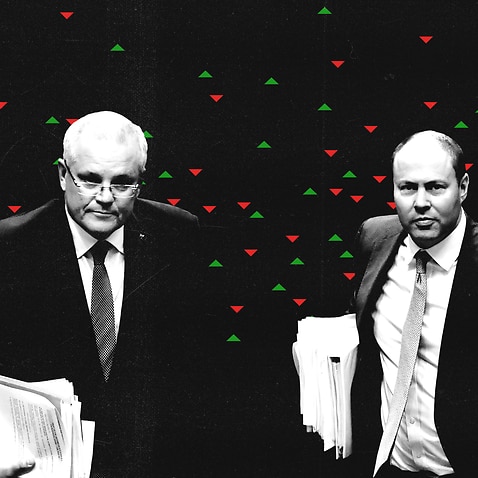 Treasury officials said the 450,000 figure related to an estimate of the number of job places that would be assisted through the hiring credit.

Mr Frydenberg has defended the more generous estimates for the $4 billion scheme.

"We on this side of the house are for all Australian workers and we are using the JobMaker hiring credit scheme to do so," he told parliament on Tuesday.

But Labor's Treasurer spokesperson Jim Chalmers said the opposition was sceptical the scheme would create hundreds of thousands of jobs.

"They've given false hope to 400,000 younger workers in this country, which is pretty shameful in itself," he said.

The Australian Council of Social Services has called for a "permanent" and "adequate" increase to the JobSeeker rate, warning that uncertainty over its future is causing distress to recipients relying on the payment.