As thousands marched in rallies across Australia to demand an end to inequality and gendered violence, the prime minister told parliament that protests elsewhere are being "met with bullets". 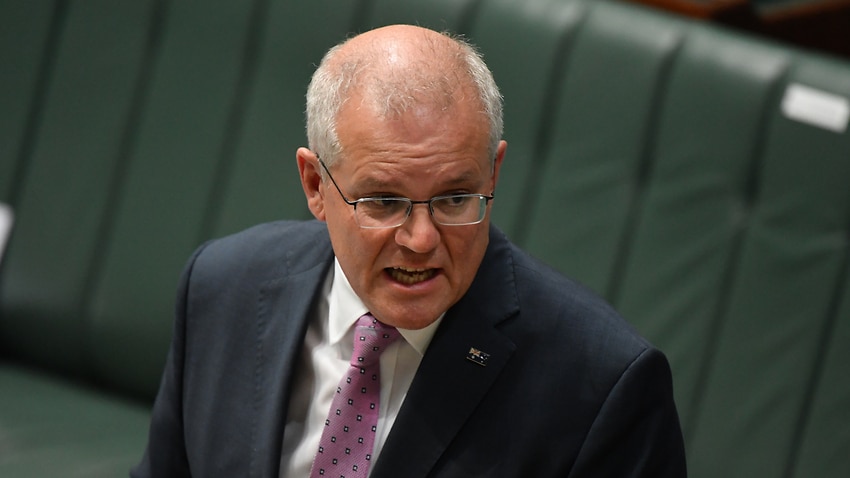 Scott Morrison has been criticised over his response to Monday's nationwide March4Justice rallies, with the prime minister noting that such marches "are being met with bullets" in other countries.

Mr Morrison did not attend Monday's rally outside Parliament House in Canberra, where protesters called for action on sexual harassment and abuse.

It was one of several large protests held around the country after former Liberal staffer Brittany Higgins alleged she was raped by a colleague in the workplace, and a historical rape allegation against Attorney-General Christian Porter was made public.

"It is good and right, Mr Speaker, that so many are able to gather here in this way, whether in our capital or elsewhere, and to do so peacefully to express their concerns and their very genuine and real frustrations," Mr Morrison said.

"Not far from here, such marches, even now, are being met with bullets. But not here in this country.

"This is a triumph of democracy when we see these things take place."

Reacting on Twitter, Labor MP Julian Hill said the prime minister was "so out of touch it's astounding", while Greens leader Adam Bandt described his comments as "unbelievable".

Ummm, so women are lucky they’re not being shot ... @ScottMorrisonMP on #March4Justiceau: "...Mr Speaker, not far from here, such marches, even now, are being met with bullets, but not here in this country, Mr Speaker."

Morrison is so out of touch it’s astounding.#auspol

Scott Morrison to marchers today: be glad we didn’t shoot you.

He just doesn’t get it.#qt

The Prime Minister thinks women should be grateful that we weren't shot for rallying for our own safety and respect at rallies across the country today.
Who is advising him? This is cooked.

Labor leader Anthony Albanese in parliament accused Mr Morrison as having "not so much a tin ear, as a wall of concrete", and called for an independent inquiry into the allegation against Mr Porter.

"The prime minister needs to listen, to listen to what women are saying about what is happening in this building and outside," Mr Albanese said.

Mr Morrison said those who gathered on Monday did so out of a sense of deserved frustration, and said he shared the same concerns.

"This is Australia's ambition, this is my government's ambition ... and I look forward to achieving a unity of purpose across this chamber and the other."

Senator's statement 'should never have been uttered'

Senator Reynolds will have to pay compensation to the former Liberal staffer after calling her a "lying cow".

The minister, who is on extended medical leave, apologised and retracted the remark, which was leaked from her office.

In his strongest comments yet, Mr Morrison on Monday said he was pleased the "disgraceful slur" had been withdrawn.

"Of course she should never have said it," he said.

But the prime minister challenged Labor MPs to provide transcripts of what was said in their offices before being in a position to "cast stones".

"This was a statement that should never have been uttered, whether in a private office or elsewhere," Mr Morrison said.

Ms Higgins says she was raped at Parliament House by a colleague in 2019 when she was working for Senator Reynolds.

The minister has argued she made the comment in response to suggestions she didn't offer her former employee enough support at the time of the alleged incident.

Ms Higgins will donate the undisclosed sum to sexual abuse survivors counselling and support in Canberra.

The prime minister has defended keeping Senator Reynolds in the defence portfolio despite growing calls for her to be sacked.