Heavy floods in northern Afghanistan have killed at least 100 people, with the death toll expected to rise, officials said.

Rescue workers in Afghanistan are searching for survivors of flash floods that killed more than 100 people and destroyed hundreds of houses near Kabul, officials said.

Troops pulled dozens of victims from the rubble of collapsed buildings in Charikar, capital of Parwan province, after torrential overnight rains fuelled fierce floods that swept through the city.

Officials and witnesses said many children were among the dead.

More than 70 people dead after violent flash flooding in Afghanistan

Local resident Mohamed Qasim, a 45-year-old farmer, told AFP that 11 members of his family were killed in the floods.

"My sister, her husband, two of their daughters and their children were all sleeping in one house," Mr Qasim said.

"When the flood hit, the house collapsed on them. Eleven members of my family were killed, most of them my nieces and nephews."

Piles of rocks from destroyed buildings were scattered across the city, with roads blocked by mud and debris and cars flipped on their side. 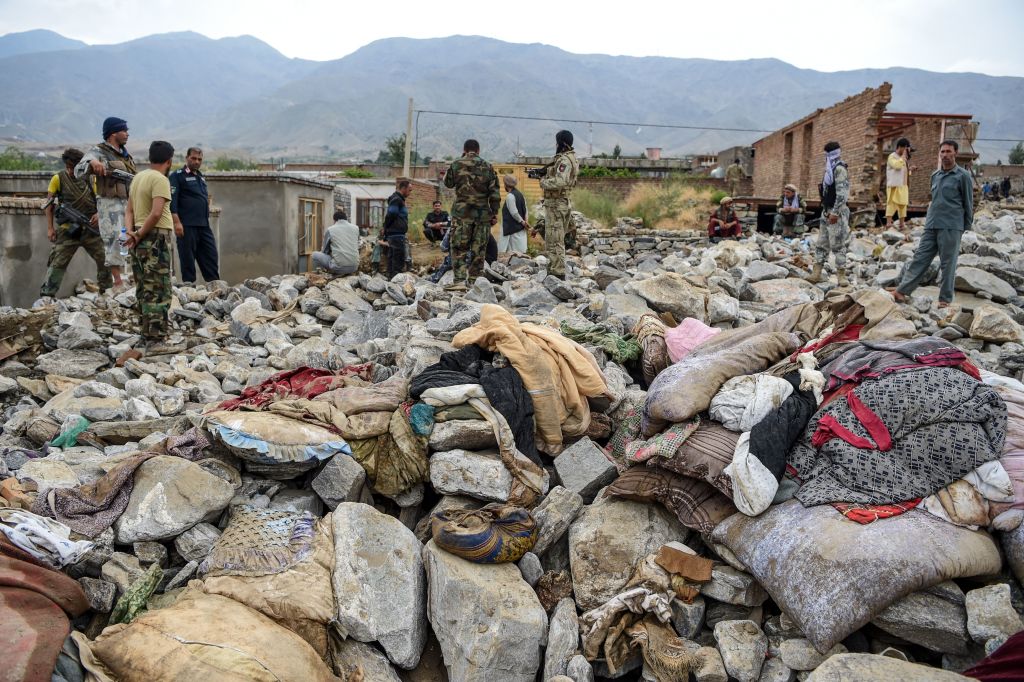 Villagers and security personnel gather after a flash flood affected the area at Sayrah-e-Hopiyan in Charikar.
AFP via Getty Images

Afghanistan's state ministry for disaster management said the death toll from the floods had risen to 100, with about 100 other people injured and nearly 500 houses destroyed.

In parts of Charikar, anxious residents gathered to see if rescue workers using heavy machinery would be able to pull loved ones from the wreckage.

Many residents stood on rooftops under continued heavy rain, holding on to their salvaged belongings.

"I was alone when the flood hit. I grabbed the window and was holding it for two hours until the neighbours came to rescue me," said 70-year-old Hamida.

"I lost everything, my jewellery, money and all my property."

Flash floods were also reported in other provinces - including Nangarhar, Panjshir, Wardak, Loghar, Paktika and Kapisa.

Many poorly built homes, mostly in rural areas, are at risk of collapse during the rains in the impoverished country.

Earlier this month, 16 people, including 15 children, were killed and dozens of houses were destroyed when flash floods ravaged a village in the eastern province of Nangarhar.

Heavy monsoon rains have also wrought havoc on neighbouring Pakistan, with authorities in the southern city of Karachi reporting 30 deaths over the past three weeks from flood-related incidents, including injuries from collapsed buildings, drownings and electrocutions.

Afghan President Ashraf Ghani had ordered emergency relief to be sent to Charikar, the presidential palace said in a statement.