Queensland senator Fraser Anning said he won't be forking out money from his own pocket to pay for the growing bill charged to taxpayers for his attendance at three far-right events.

Scott Morrison condemned Senator Anning for attending the rally and associating with extreme and offensive views.

"He is a repeat offender on these issues," Mr Morrison said in a statement.

Senator Anning dismissed the criticism from Mr Morrison and others.

"They're all left-wingers and unfortunately the PM hasn't understood the Australian people want an alternative," he told Nine's A Current Affair. 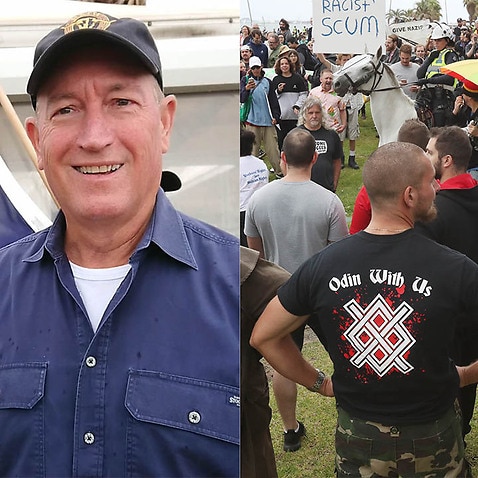 "As far as I'm concerned they're all puppets to the United Nations."

Senator Anning said the "neo-Nazi stuff" was at a separate rally about 150 metres from where he was on St Kilda beach despite being seen with convicted criminal Blair Cottrell who has previously expressed admiration for Adolf Hitler.

He said Nazi salutes were abhorrent to him, defending the $2852.80 he spent on flights to get to the rally, which he claimed was about "Sudanese gangs" being out of hand.

Taxpayers charged for two other trips

The senator's comments come as reports emerged he also charged taxpayers to attend at least two other far-right events in 2018.

In July, he joined Canadian far-right activist Lauren Southern at a rally in Sydney, The Sydney Morning Herald reported on Tuesday.

Costs for the trip included two nights of accommodation for $810, and flights between Sydney and Brisbane costing nearly $1900, Independent Parliamentary Expenses Authority figures show. A further $1437 was claimed during a day trip from Sydney to Melbourne.

The senator also charged taxpayers for another trip to Melbourne in October to speak at an Australian Liberty Alliance's Rally for Free Speech. The costs from that event are yet been declared, but are estimated to be in the thousands.

Senator Anning sparked fury among parliamentarians and the public with his maiden speech in August when he called for a ban on Muslim immigration and a plebiscite, saying "the final solution to the immigration problem of course is a popular vote".