A former asylum seeker has called to be repatriated to his homeland after being detained in a NSW psychiatric hospital for 16 years.

A former asylum seeker who has been detained in an Australian prison complex for 16 years after being found not guilty of manslaughter has enlisted the Iranian government for help in his bid for freedom.

The 59-year-old man, Saeed Dezfouli, has been detained at The Forensic Hospital at Long Bay prison in NSW since 2003.

The Australian Government won’t let him leave unless Iran can guarantee his repatriation would include supervised psychiatric care.

“I don’t have a future in Australia,” Mr Dezfouli told SBS News.

“I am desperate and I want to go back to Iran to be with my family and that is the only way. Saeed Dezfouli wants to go back to Iran.
Supplied

Iran has a dismal human rights record but has called on Australian authorities to give Mr Dezfouli “a Fair Go” and allow him to return to his homeland. A letter from the Iranian embassy says his repatriation will put an end “to 16 years of bitter experiences in care and custody in your mental health system”.

In 2002, Mr Dezfouli set fire to the foyer of the Ethnic Affairs Commission building in Ashfield, Sydney, where he worked as a court interpreter, after becoming convinced then-Prime Minister John Howard was trying to kill him. A woman later died due to smoke inhalation.

He was later found not guilty of murder by reason of mental illness and detained in psychiatric care as he was deemed a threat to the community.

He renounced his citizenship last year in a bid to be repatriated to Iran, which he said was his only way to leave the hospital.

“I’m stuck indefinitely in this system here,” he said.

He has been diagnosed with chronic paranoid schizophrenia. SBS was granted permission to publish Mr Dezfouli’s name by the NSW Mental Health Review Tribunal. In correspondence seen by SBS News, Mr Dezfouli was flagged as a person of interest by the Australian Federal Police in 2006 after sending threatening letters to high-profile politicians while in care.

In October, the Iranian embassy in Canberra wrote to NSW Premier Gladys Berejiklian calling on her to intervene in Mr Dezfouli’s case and allow his immediate release and repatriation as he had “suffered enough” in the care of the state’s health system.

“We hereby would like to request for your honour’s kind consideration, intervention and assistance over this very serious sensitive, important and concerning issue involving both the NSW and Iranian governments and systems and to assist Mr Dezfouli to have a “Fair Go” in Iran,” the letter from the Iranian embassy reads.

Mental Health Minister Tanya Davies told the consulate in response that any decision regarding Mr Dezfouli “is strictly a matter for the [NSW Mental Health Review] Tribunal to decide”.

“In considering arrangements for Mr Dezfouli to return to Iran, the Tribunal has a legal responsibility to consider the likely effect of its orders, including whether [his] mental health needs will be met,” she wrote.

“This requirement exists even though Mr Dezfouli has renounced his Australian citizenship”.

A risk to the public?

As required by law, every six months Mr Dezfouli’s case is reviewed by the New South Wales Mental Health Review Tribunal and his release or continued forced psychiatric care is considered.

The Tribunal has said to release Mr Dezfouli would be a risk to the public without supervised psychiatric care and has requested the Iranian government agrees to detain him for treatment in Iran. Without a guarantee, the Tribunal has declined to release him for repatriation. 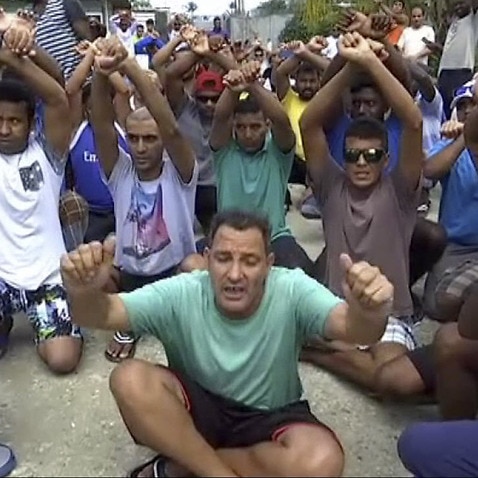 But the Iranian government had declined to make such promises. In a letter to the Tribunal in December 2017, the Iranian embassy in Canberra said the Tribunal should not “instruct the Government of the Islamic Republic of Iran how to handle its citizens”.

“Just like any other citizen in Iran, under Sharia laws Mr Dezfouli has civil, legal and human rights and is entitled to be free and prosper in Iran as long as he does not break any law in Iran or commit an unlawful act,” the letter reads.

“We would like to request you to not instruct the government of the Islamic Republic of Iran how to treat and handle its citizen and not to meddle with the internal affairs of Iran and to refrain from interfering with our citizen’s rights, liberty and freedom in Iran too”

Brett Collins from the prison advocacy group Justice Action says independent legal advice sought suggests Mr Dezfouli would have only faced around three-and-a-half years in prison had he been found guilty of manslaughter.

“Nothing about his case is fair, he would have been freed long ago if he had been found guilty,” Mr Collings told SBS News.

Dr Piers Gooding, a research fellow at the Melbourne Social Equity Institute at the University of Melbourne, says those who use what are known as ‘special defences’, not guilty for reasons of mental impairment, face indeterminate outcomes.

He says there isn’t evidence available on how many people who use special defences face longer periods of detention then they would have if they had been found guilty, as has happened in Mr Dezfouli’s case.

“The UN Committee on the Rights of Persons with Disabilities, for example, has criticized Australia and all countries which maintain indefinite detention for people who use special defences,” Dr Gooding said.

“They are in effect arguing that special defences, in their current form, constitutes disability-based discrimination,” he added.

Dr Gooding said there are programs in Queensland and in Victoria for complex needs patients with disabilities that have been recognized as best practice and that community-based services should be explored over ongoing detention.

“It seems reasonable to suggest that well-funded community-based services that are culturally sensitive and can be responsive to people who may not wish to engage with mainstream services would be helpful,” he said.

If you are struggling mentally contact Lifeline Australia crisis support on 131114.