Alexis Ohanian Sr has labelled a cartoon of his wife Serena Williams by Australian illustrator Mark Knight "racist and misogynistic".

The husband of Serena Williams has broken his silence on the controversial cartoon of the US tennis champion published by Australian newspaper Herald Sun.

Alexis Ohanian Sr called the cartoon of his wife "racist and misogynistic" via a Tweet on Friday.

But instead of directing his criticism of the cartoon towards the cartoonist Mark Knight, Ohanian singled out the newspaper's 'editor', who publicly defended its publication.

"I am truly perplexed to learn this editor of the Australian newspaper behind the blatantly racist & misogynistic cartoon of my wife is a 'Male Champion of Change" ... Is this supposed to be satire, too?"

I am truly perplexed to learn this editor of the Australian newspaper behind the blatantly racist & misogynistic cartoon of my wife is a “Male Champion of Change” 🤔 Is this supposed to be satire, too? @malechampions @LizBroderick https://t.co/QAq25HAhTo https://t.co/jOuYojCE3P

Knight drew a caricature of Williams throwing a temper tantrum, which was printed in the Herald Sun, following her loss to Japan's Naomi Osaka in the US Open women's singles final in New York last weekend.

The illustrator said it was prompted by her "poor behaviour" shown during the match.

Williams, who was vying to equal Australian player Margaret Court's record of 24 grand slam singles titles, lost in straight sets after a heated clash with chair umpire Carlos Ramos over code violations that resulted in her being penalised a game.

But critics, most notably online, labelled the cartoon racist because it depicted Williams with big fat lips and masculine features. 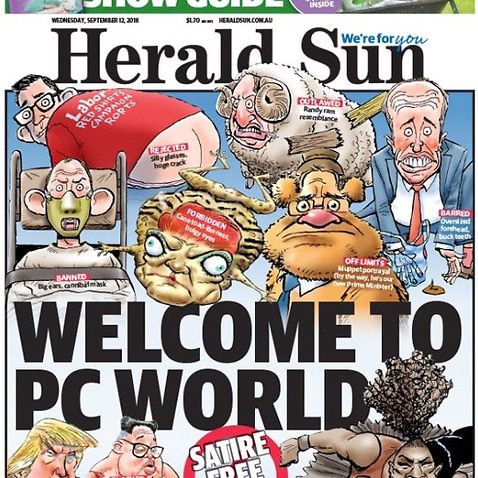 Both Knight and Herald Sun editor Damon Johnston denied the image was racist, and in defiance, the Herald Sun reprinted the controversial cartoon on its front page alongside other caricatures of US President Donald Trump and North Korean leader Kim Jong-un.

"If the self-appointed censors of Mark Knight get their way on his Serena Williams cartoon, our new politically correct life will be very dull indeed," the paper wrote in an editorial on its front page.

@Knightcartoons cartoon is not racist or sexist .... it rightly mocks poor behavior by a tennis legend ... Mark has the full support of everyone @theheraldsun pic.twitter.com/KWMT3QahJh

SBS News has contacted the Herald Sun, a News Corp newspaper, for a response to Ohanian's comments.

Williams, 36, received a game penalty after she lashed out at chair umpire Carlos Ramos, calling him a "thief", after previous code violations for coaching and then smashing her racquet.

She insisted male players had called chair umpires much worse and she was being treated differently because she is a woman. Williams was fined $17,000 for her three code violations during the US Open final against Osaka and again said after the match male players were held to a lower standard for court conduct.

“I’m here fighting for women’s rights and women’s equality,” Williams said at a news conference after the match. 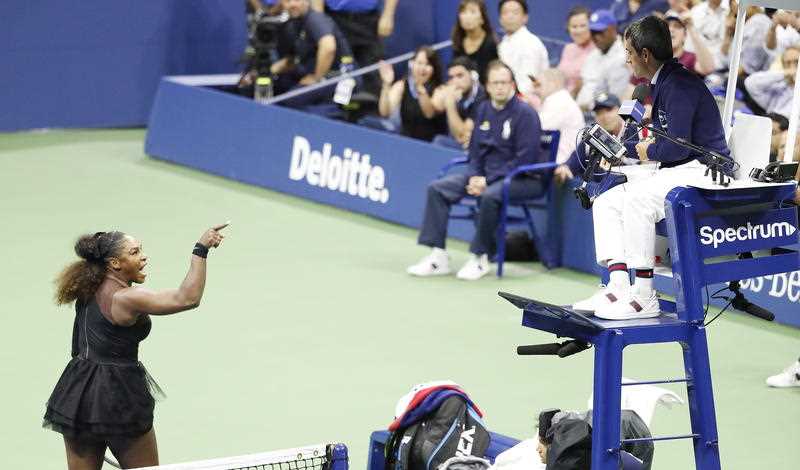 Serena Williams gestures towards chair umpire Carlos Ramos as she plays Naomi Osaka of Japan during the women's final.
AAP