The report suggested that government contractors would be obliged to see that at least 40 per cent of the workforce was female, however Ms Jenkins said the quota was one way in which the government could lead by example on redressing gender imbalances in workplaces around the country.

"We did not recommend that quotas be put in place, rather we recommended that the Commonwealth Government should become a model industry in improving the participation of women in the workforce," she said in a statement on Monday.

"This is not a mandatory quota. Organisations would not need to meet this gender balance target to secure government contracts."

“We absolutely have to give women a fair go but some of this stuff sounds like it’s just anti-men," he told Ray Hadley.

Earlier this year, the AHRC made a submission to a Senate Inquiry to consider the issue of gender imbalance in the workforce, proposing that government organisations make a more concerted effort to hire women, with the ultimate goal of reaching a 40:40:20 balance, with the remaining 20 per cent to allow for flexibility.

Ms Jenkins said taking steps such as seeing recruitment short lists during the hiring process could help improve hiring practices in typically male-dominated industries, such as construction and IT.

"The recommendation simply asks for 'demonstrated efforts' to improve gender balance," she said.

"Increasing diversity in organisations has proven benefits. By improving women’s participation in male-dominated industries we can broaden the talent pool within these industries, address skills shortages and improve the performance of organisations. Similar benefits would flow to female-dominated work forces."

Women’s issues advocate and author Catherine Fox said that quotas did not compromise employers’ ability to scope the best talent.

My statement setting the record straight on today's media reports on gender balance in the workforce: https://t.co/Cl7LukzCts

“I hate the word ‘merit’ in some ways because I think it’s overused and it’s misued, but I think, actually, when it comes down to it, having targets, having those kinds of goals that we put in place is really about finding the best people to do the jobs that we have, and not narrowing our options, which I think is the problem that we have at the moment,” she said.

Mr Abbott said if the government wanted to do the right thing by women the best thing it could do was to get good conservative women into the parliament.

"That's one of the challenges which faces my party right now," he said.

Mr Abbott, who also served as the Minister for Women during his tenure as prime minister until 2015, was widely condemned for appointing just a single woman - Julie Bishop - to federal cabinet in 2013.

“We as a society, we felt very uncomfortable with that, that didn’t reflect what we thought should be a cabinet for a federal government,” Ms Fox said.

“He then, subsequently, sometime on after he lost the leadership, he regretted that, he admitted that that was probably a mistake.

“I think this is not a person that we turn to for the best judgement on some of these issues,” she said.

CEO of the International Women’s Development Agency Jo Hayter said that implementing gender quotas was about democracy, not political correctness.

“Australia signed on to the Global Goals for Sustainable Development Goals in September 2015 - Tony Abbott was Prime Minister of Australia throughout the entire negotiation process.

“Does today’s statement mean he never had any intention of respecting the Global Goals? Or has he simply forgotten what he signed our nation up for?” 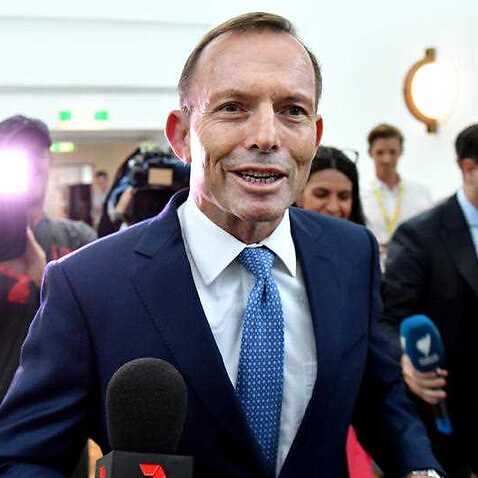 Abbott vs. Turnbull for PM