Anti-Adani protesters have disrupted a Scott Morrison speech, as Coalition tension mount around the controversial project.

Anti-Adani protesters have disrupted Scott Morrison at a Brisbane business lunch, but the prime minister appeared to take in his stride.

One woman carrying a Stop Adani protest flag managed to reach Mr Morrison's side, saying "we care about the climate. This will be a climate election ... Shame".

She was dragged away by security as a second protester stood to yell "stop Adani".

"Do we have contestant number three?," Mr Morrison asked as the protesters were jeered and removed from the Valley Chamber of Commerce. Security pounced on protesters who were chanting "climate election, no more coal" .
AAP

Then a table of 10 protesters started chanting "climate election, no more coal" before they were escorted out by security.

There were about 100 anti-Adani and refugee protesters outside the event.

"We just had a summer of unprecedented heatwave, bushfires and floods and yet this government still continues to ignore what we need to do to address the climate crisis." Several teenagers said they were looking for action to save the planet.

Jo, from Cleveland, told the crowd outside the business lunch that all she wanted was a future.

"I am 17 years old and I want is for our government to do what they need to to save the planet," she told the crowd.

"This is our home, this is what houses us, we have a responsibility to care for it." 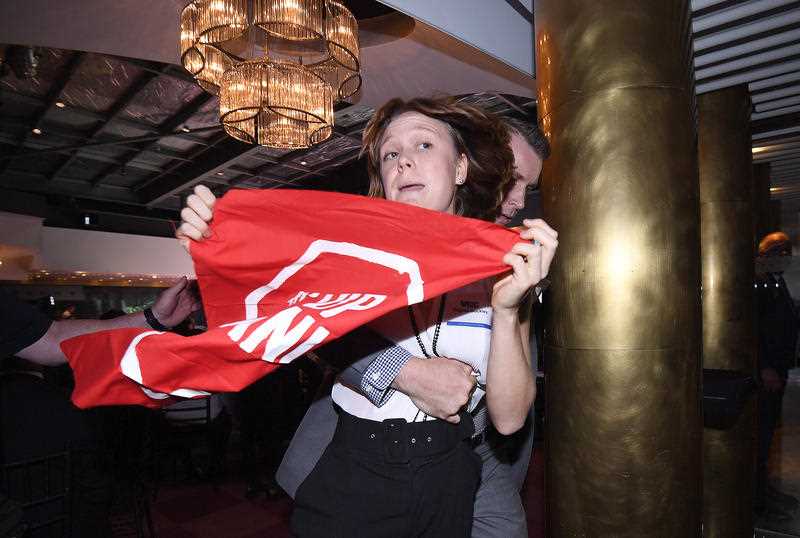 The woman bearing a flag was able to reach the stage before being ejected.
AAP

The protest came as Treasurer Josh Frydenberg, who was environment minister before Melissa Price, said the vast majority of federal environmental approvals for the Adani coalmine were done.

But Liberal senator James McGrath, who famously helped bring down Tony Abbott and Malcolm Turnbull, has now turned his attention to Ms Price.

He reportedly will publicly call on her to resign unless she urgently approves the groundwater management plan for the central Queensland mine before the government goes into pre-election caretaker mode. Mr Frydenberg played down the tensions when asked about the threat on Monday.

"Melissa Price is going through the proper process, working with the scientists, taking the best possible advice," Mr Frydenberg told reporters in Melbourne.

"The Adani project is one where the major approvals have been given and it is now going through the sub-approvals."

Mr Frydenberg said there were "180 rigorous environmental conditions attached" to the Adani coal mine project. Treasurer Josh Frydenberg has defended an apparent delay on final approvals for the Adani coal mine.
AAP

"I would have much rather if he had not made that sort of communication but he has and we are where we are," he told a Senate hearing.

"I'll come to climate, don't worry about that mate," Mr Morrison said after one of the disruptions.

"Our government inherited a climate deficit from the Labor party when we came to office."

Mr Morrison said the final approvals were "quite minor matters".

"Like in all the other cases, we will be relying on the scientific evidence that is provided to the government in making those decisions," he told reporters. "LNP politicians are bullying the minister for the environment - saying 'You will lose your job if you don't give us the answer we want on Adani'," Mr Shorten told reporters in Brisbane.

"This is a failure of ethics in government at the highest level."

Mr Shorten said in government he would be guided by the "best science and the law of the land" on the Adani approvals, but no taxpayer money would go to the project.

Queensland Nationals and conservative Liberal MPs are increasingly restless for the Galilee Basin project to go ahead, but their colleagues worry it will hurt the Victorian vote.

Adani has said it will self-fund construction of a scaled-down version of the original mine plan.