Justine Barwick has spoken for the first time since being attacked by a shark.

Whitsundays shark attack victim Justine Barwick is now fully conscious and has spoken about her ordeal.

Ms Barwick, 46, was mauled by a shark last week and remains in the ICU of the Royal Brisbane and Women's Hospital.

Ms Barwick's husband Craig told the ABC she spoke for the first time since the attack on Monday. 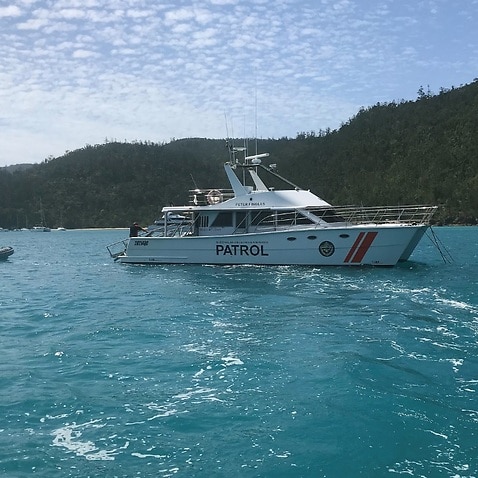 "In typical Justine fashion her first words to me were 'sorry I have caused so much trouble' and she is asking after the welfare of family and friends," Mr Barwick told the network.

Hannah Papps, 12, was also attacked by a shark in the area last week and is in a critical but stable condition in the Queensland Children's Hospital.

It comes as authorities confirmed two more sharks had been caught on drum lines and killed.

In total, five tiger sharks and a small black tip shark have been killed in Cid Harbour by Fisheries Queensland over the past week. Queensland Premier Annastacia Palaszczuk has stood by the decision to kill the sharks.

"Can you imagine the public outcry if anything else happened up there in that particular region during school holidays if the Department of Fisheries took no action?" Ms Palaszczuk said in response to questions about public outcry over the shark kills on Monday.

Mr Gschwind said while one of his key concerns was visitor safety, it was important to remember "the number of shark attacks in the Whitsundays is very, very low".

He said data showed there had been a steady decline in unprovoked shark attacks in Queensland over recent decades. "There is no trend in the data that would suggest it's any more likely now than it has ever been," he said.

"There's certainly no concern that suddenly we have an increased risk of shark attacks."

He also said the Whitsundays is now bracing for a hit to the tourism sector.

"There's concern among tourists who are there at the moment as it has attracted enormous publicity," he said.

"[But] our message to tourists is to look at the facts if you are concerned. Inform yourself from your local tour operator and official channels."

Animal rights groups have continued to condemn the killing of sharks, citing the state government's admission that it does not know if these sharks caused the injuries.

Mr Chlebeck said the method was "ineffective and cruel" and questioned why the state government was relying on "decades-old" technology.

"It actually gives the public a false sense of security."

He instead advocated the use of more current technology to reduce these sorts of incidents, such as drones and other aerial surveillance.

Sea Shepherd's Jonathan Clark said on Sunday that "baited drum lines targeting sharks in the area will do nothing to prevent further accidents".

"Stop the nonsense about speaking of 'effectiveness' only in terms of their ability to kill sharks.

"That bit is easy and it's lazy policy. Making beaches actually safer is much harder and unrelated to their ability to kill sharks."