"The person was earlier being treated at Middlemore Hospital," the statement said.

"Police remain focused on supporting families at this terrible time."

NZ police say a sixth person has died following the eruption on #Whakaari. Authorities are yet to confirm the person’s identity but say they were being treated at Middlemore hospital in #Auckland #NZVolcano @SBSNews

A further eight people are still unaccounted for.

Earlier, New Zealand Prime Minister Jacinda Ardern warned against immediate finger-pointing in the wake of the Whakaari volcano eruption as Kiwi authorities announce at least one probe into the tragedy.

The island is privately owned and it is up to tour operators to decide when to visit. 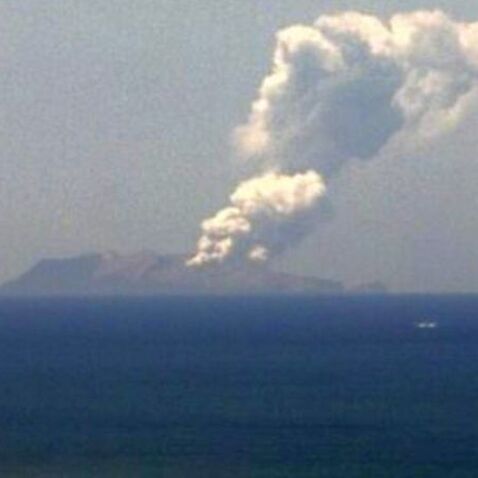 "We'll look into if there was anyone criminally responsible for the deaths and injuries. It's early days yet," Mr Tims said.

"I would strongly suggest that there is no-one that has survived on the island.

"We're doing everything we possibly can. We know the importance of recovering the bodies to the families and friends."

He announced a criminal and workplace investigation would be conducted. 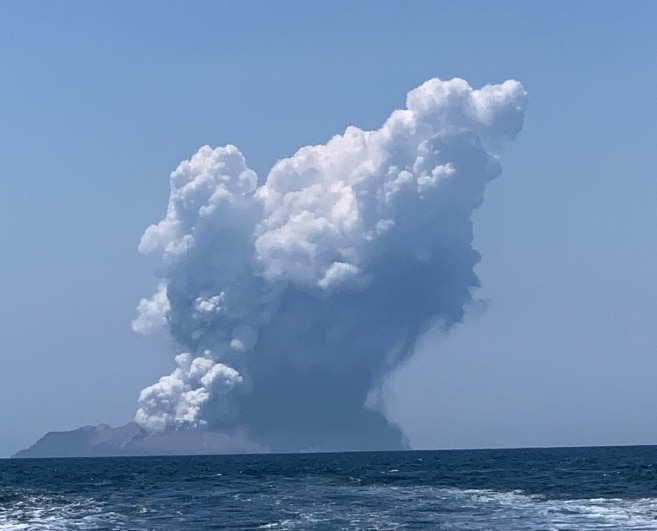 Ministry of Health spokesperson Pete Watson told reporters 31 people were injured as a result of the eruption.

"All our burns units are full to capacity. Our plastic surgeons, hospitals, anesthetists are doing their best to treat the many who have sustained injuries. Twenty-seven of the 31 have suffered greater than 71 per cent body surface burns."

GNS Science has estimated there is a 50 per cent chance of "a smaller or similar sized eruption over the next 24 hours".

"This is a very, very hard day for a lot of Australian families whose loved ones have been caught up in this terrible, terrible tragedy," Mr Morrison told reporters in Sydney.

"I fear there is worse news to come over the course of perhaps today or over the next few days."

Thirteen Australians are among those in hospital, some in a critical condition, while three were discharged overnight.

A website set up by the New Zealand Red Cross to help connect people affected by the catastrophic eruption lists more than 20 Australians missing.

Some may still be in hospital, some may be unaccounted for and some may be safe but not yet able to contact the Red Cross or others to notify their status.

As seen from space. pic.twitter.com/pzLk8rNAJx

"To those who have lost or are missing family and friends, we share in your unfathomable grief at this moment in time and in your sorrow," Ms Ardern said.

A group of people can be seen on a GNS camera walking close to the crater just minutes before the eruption.
www.newshub.co.nz

"To our Australian family especially we will do everything we can to support you as you have supported us.

"We know too there will be bigger questions in relation to this event. These questions must be asked and they must be answered.”

Ms Ardern said she had been in regular contact with Scott Morrison since yesterday evening.

"Our duty is to return loved ones and ... there is much work to be done."

Ms Ardern praised the actions of helicopter pilots who were in the area at the time of the eruption.

"In the immediate aftermath of the eruptions, we had several helicopters who made a courageous decision to return and land on the volcano.

"They were able to pick up, to bring back to the mainland, those who were on the island, many of which were critically ill." 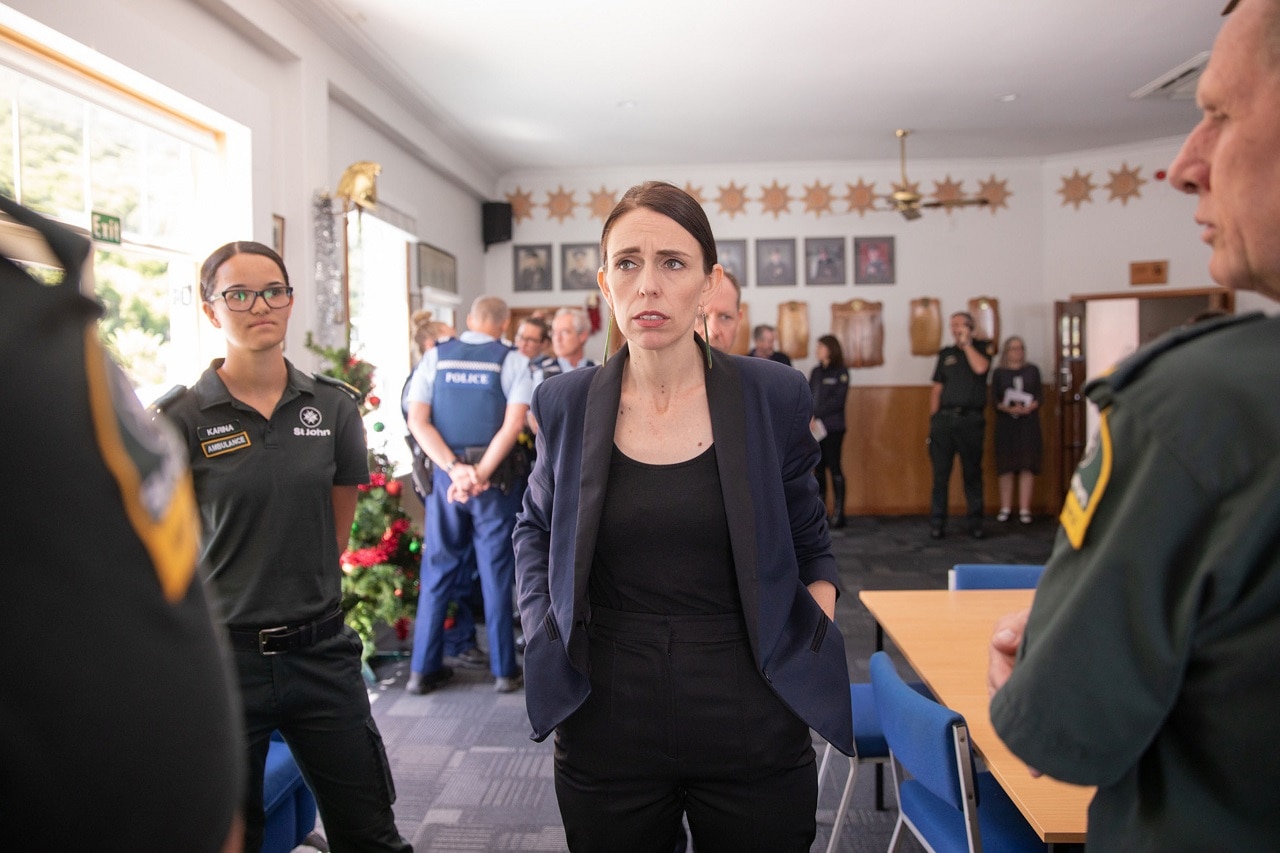 The Australian Federal Police are working with their counterparts in NZ and Australian consular staff have been in contact with the Royal Caribbean Cruise Line Company, who Mr Morrison said had been "very helpful and cooperative".

Throughout Monday, police attempted to contact those who remained on the island during the blast without success while also trying to discover how many people were missing.

In a late-night statement, police suggested the prospect of survivors was lost, saying "based on the information we have, we do not believe there are any survivors on the island". 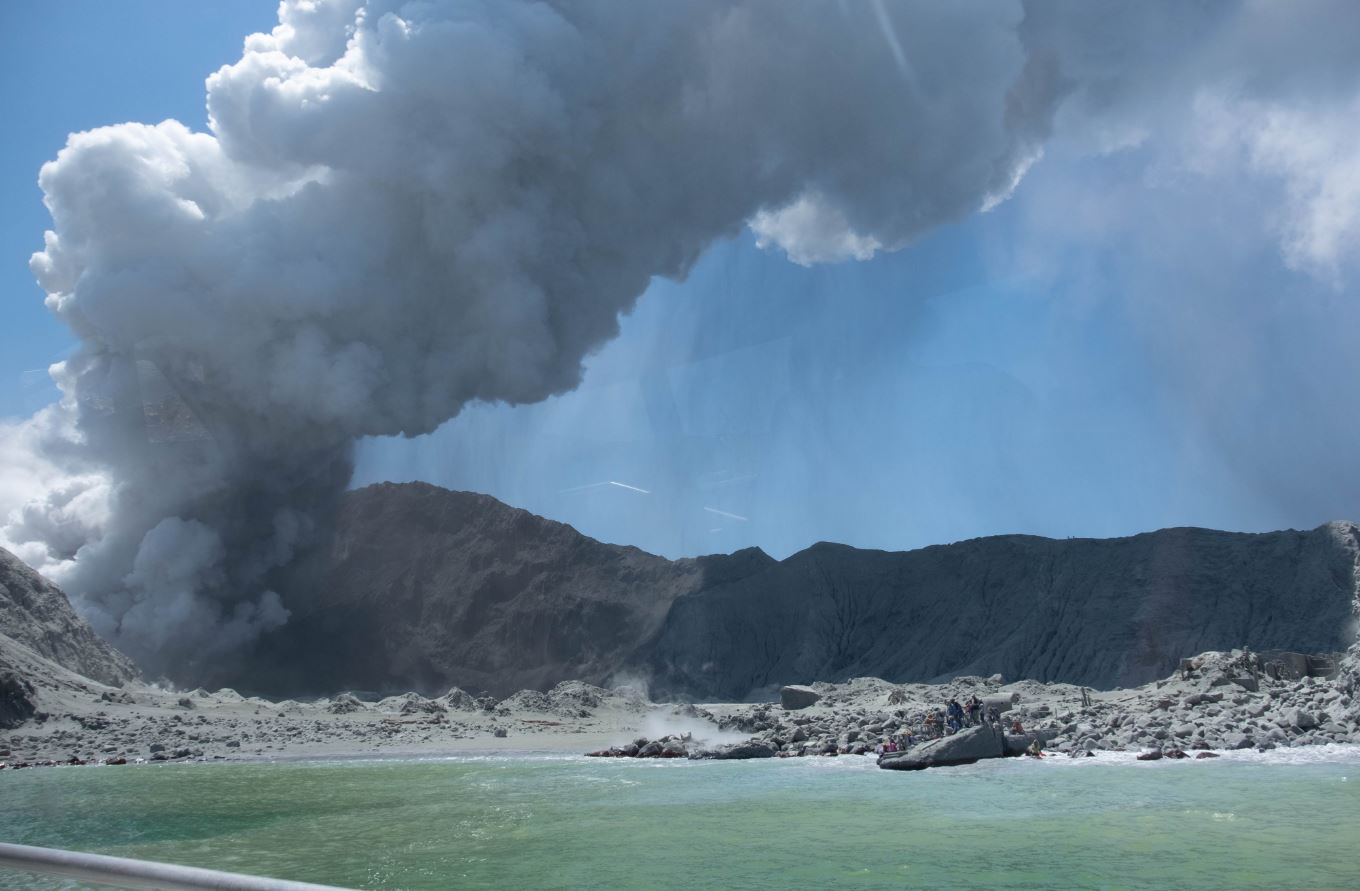 Whakaari erupts. Dozens of tourists were injured and one person was killed.
Twitter / Michael Schade

Acting assistant commissioner Bruce Bird, alongside Ms Ardern, said it was still not safe to return to Whakaari.

"Today our focus will be on working with the experts in determining the safety for us to return to the island to look to recover those people who are currently missing," Mr Bird said.

"We will be relying on advice coming from a scientific and technical committee in Wellington ... we will only go to the island when it is safe to do so for our people."

An image of the eruption.
GNS Science, Te Pū Ao

Family and friends have confirmed local man Hayden Marshall-Inman, a tour guide for White Island Tours, as one of the dead.

Mark Inman wrote on Facebook that his brother had passed away "doing the one thing he loved".

Royal Caribbean, owner of Ovation of the Seas, issued a statement saying the ship would stay in the nearby port of Tauranga "until we learn more about the situation".

"We are devastated by [Monday's] events and our hearts go out to all those affected by this tragedy," the company said in a statement.

"We are working together with local authorities, and we are providing all the help and care we can to our guests and their families, including offering medical resources and counselling. We are also sending staff members from both our ship and our Sydney and Auckland offices to assist family members however possible."

The island is frequently visited by tourists as part of organised boat tours from Whakatane.

There has been an eruption on White Island, and our aviation meteorologists have issued a volcanic ash advisory for the area. Image from @gnssciencehttps://t.co/VNqvEljWbT^AJ pic.twitter.com/sMzhcm8CTw

But the nature of volcano activity is unpredictable, with the eruption unforeseen by authorities.

A GeoNet camera of the crater's rim, set to take pictures every 10 minutes, showed a string of people visiting the crater at 2:10pm.

The next shot taken, at 2:20pm, was unreadable as the blast had rendered the camera inoperable.

A volcanic eruption is occurring at White Island and is hazardous in the immediate vicinity of the volcano.

If you are concerned about the welfare or whereabouts of a loved one, contact Smartraveller.

Danish newspaper refuses to apologise to China over coronavirus cartoon