Sushi lovers are lining up for the Surfing Sushi Chef

Previous Next Show Grid
Previous Next Hide Grid
Image 1/
Video 1/
Audio
Tourists from around the world are travelling to rural Tasmania to visit Masaaki Koyama's sushi restaurant.
By
Tom Stayner

Geeveston is a small town in Tasmania’s lush Huon Valley. Home to less than 1,000 people, the former logging town is in a quiet and unassuming part of the state, yet tourists from around the world are flocking there for one thing.

They're lining up to visit Masaaki's Sushi, a restaurant famous for having best some of the best sushi in Australia.

Geeveston is an unlikely place for a sushi bar, but the town's been firmly put on the foodie map.

Hungry patrons are known to queue for up to 30 minutes, and it's become so popular that it's now only open on weekends. In fact, some people don't manage to get a seat at all without booking weeks in advance.

Founder Masaaki Koyama says, "Now we are booked two or three weeks ahead and takeaway is very busy. People start queuing up before 11 o’clock."

Masaaki says he spends the other days getting ready for the weekend rush, chopping vegetables and ordering local fresh seafood and ingredients.

His talents have seen his sushi gain admiration far and wide, but it was his love for his partner Lucy that inspired Masaaki to migrate from bustling Osaka to rural Tasmania in 2007.

“I met a beautiful girl in Japan and she was from Tasmania – she was my English teacher.”

Masaaki opened the shop in 2009 and ran it seven days a week, getting up early every morning to prepare the food.

He says it took two years for business to pick up, and locals were apprehensive to try sushi at first.

“There were only a few customers. I was eating sushi with customers on the tables. I couldn’t speak very good English at all so it was quite challenging,” he says.

“Many people didn’t know about sushi. When I opened the shop, many people said, 'what is sushi, what is wasabi?' I thought it was really funny."

Eventually, the sushi joint got a major boost after famed British chef Rick Stein featured Masaaki on one of his TV programs.

“He made us really busy. The experience was amazing. We couldn’t believe it," Masaaki says.

Geeveston residents also eventually embraced his cuisine, and he's grown into a local identity. Masaaki also known as the Surfing Sushi Chef, given his love for the Tasmanian coast. 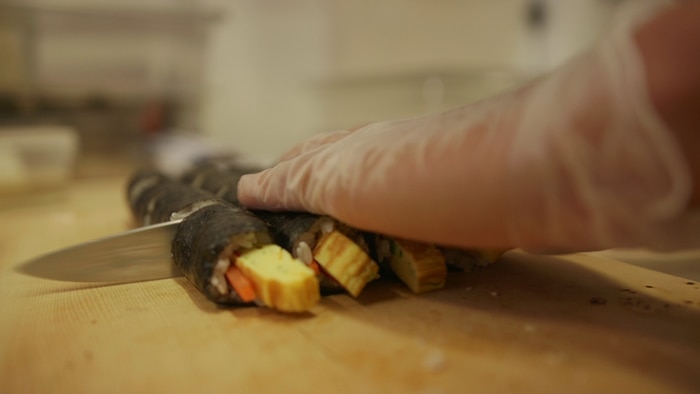 After 30 years of training as a sushi chef, the art is deep-seated in Masaaki, but he ultimately attributes his skills to his family.

“First my grandma [taught me] many years ago. My father was a very keen fisherman [and] made sushi. I guess I was learning naturally from my parents and family," he says.

Masaaki plans to expand out of his hole-in-the-wall restaurant and across the road into a former church.

Despite his success, he remains humble.

He rejects his title as one of the best sushi chefs in Australia and says, "There are so many great sushi restaurants in Australia. It’s not just me.”

Watch this story at the top of the page, or catch the full episode on SBS On Demand.