From a bedroom-based startup to a multi-million dollar company with strong roots in Asia, Zookal's young entrepreneurs have created something the world’s never seen before. 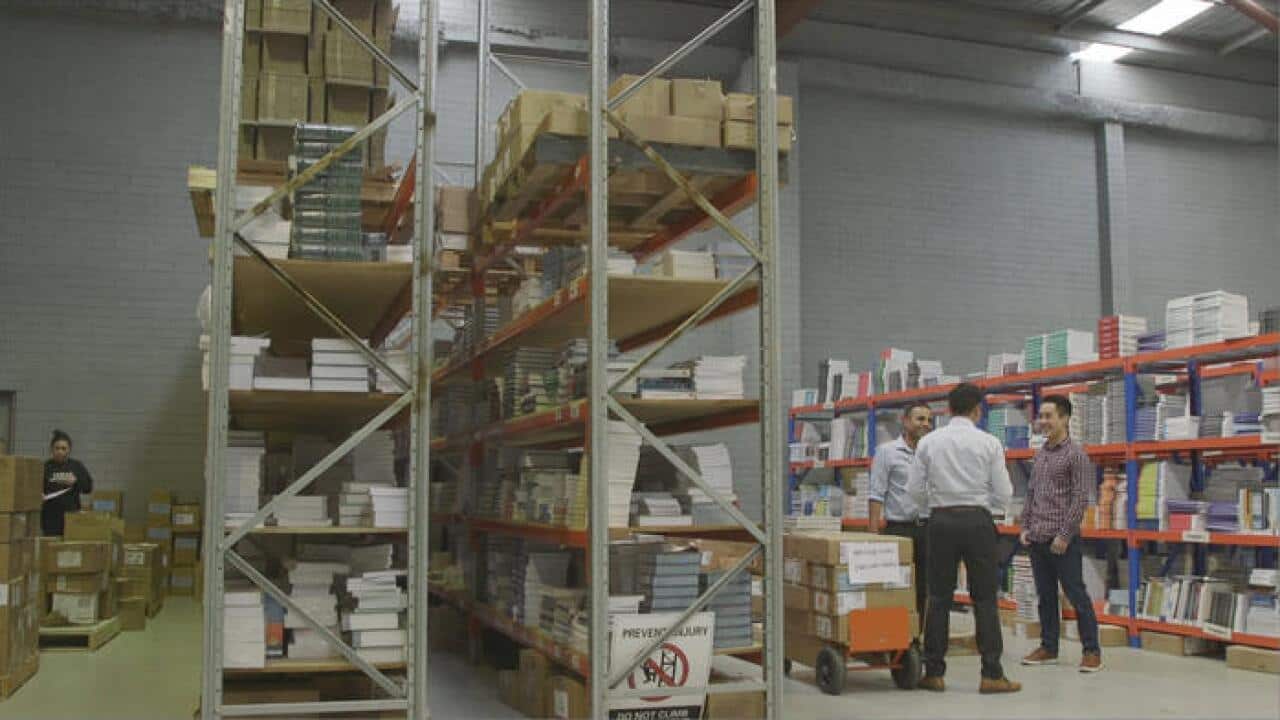 Zookal began as a bedroom-based startup, and has seen rapid growth since then. Source: SBS

Tucked away in an industrial park in Sydney lies Zookal HQ. It’s an unassuming location for a startup that’s helped hundreds of thousands of university students by renting them textbooks.

Zookal's CEO and co-founder Ahmed Haider said the team’s goal was to make education more accessible and had sent out 170,000 books in 2016 alone.

It’s an integral part of the business and something Mr Haider values having migrated from Pakistan to Australia with his parents when he was just four-years-old.

Advertisement
“In the first year I think we did about $10,000 in revenue, which we were super excited about at that time,” he said.
Zookal moved into this new warehouse space in April 2017. Source: Supplied

“Last year we turned over about $15 million so this year we’ll do about $20 million.”

He said growth has been tremendous since they started in 2011, attributing their ability to solve a problem many people identified with.

Through years of hard work, spending their savings on an overseas trip to raise capital and leaving university to pursue an education company, he and his co-founders have continued to grow the business.

Today Zookal has a presence in South-East Asia, Singapore, Hong Kong and the Philippines.

But changes in the technology industry and emerging trends prompted the team to consider how they could turn them into opportunities.
Textbooks are packaged and sent from Zookal's new warehouse. Source: Supplied

“It’s a balance between focus and diversification because you can be in too many things and you can do them poorly, and at the same time if you’re not watching the market you’ll be disrupted – it’s either disrupt or be disrupted,”  he said.

So with Chris Zaharia, Zookal’s Chief Technology Officer and fellow co-founder, and the Zookal team, they were able to develop an artificial intelligence algorithm.

Dubbed Quiz Infinity, the trivia-style app takes information from the internet and breaks down sentence structures before feeding it into the back-end question generation system.

By doing this the AI automatically creates multiple choice quiz banks and categories these quizzes based on trending topics and you’re location.

“For example, if you’re a student and want to read an entire data set of textbooks, you can do that now,” Mr Haider said.

“There are so many applications – in training, in news, in helping to make smarter chatboxes so they can identify things, places and people.”

Reflecting on when they first started, Mr Haider said everything that could have gone wrong, did.
Ahmed Haider isn't afraid to set his sights high. Source: Supplied

But there was no thought of failure or doubt, which turbocharged their vision to overcome challenges and conquer obstacles.

“I think a lot of startups don’t die, they commit suicide because you never realise how close you are to making it work,” he said.

“Business is hard, it’s not something that’s easy to do and I think if you go in with the mindset anticipating that it’s going to be very hard, that’s when you’ll succeed because you’ll look at these pitfalls and say, ‘it’s just Tuesday, not the end of the world’.”
Ahmed Haider and Zookal Australia's managing director Jermoy Lowe know the importance of having fun while working and take a break by shooting hoops. Source: Supplied

His top tips for startups still in their infancy are: “be self-motivated, invest and execute your plans, have a strong support network, be grounded so you can see your competitors and don’t work up your own hype, and don’t be too hard on yourself,  make sure you have fun.”