High speed, cheap internet from Australia is set to revolutionise the islands, but landowners are demanding compensation over the plan.

The rollout of the Solomon Islands’ $136 million submarine internet cable deal with Australia faces possible delays, after the islands’ prime minister revealed he was unaware of landowner issues.

Landowners will demand compensation over the controversial deal and are threatening to go to court if their government does not meet their terms - threatening the project’s ambitious timetable to have it completed by the end of 2019.

“The foreshore belongs to my tribe, that means there will be monetary transaction involved before consenting to the project,” Vincent Kurilau, chief of the Haubata tribe and the last living trustee of the land and waters, told SBS News. Mr Kurilau is the trustee of 1,541 hectares below the high-water mark, stretching the length of the capital Honiara's coast to Henderson International airport. The cable would travel through his tribes’ property if directly brought to shore in the capital.

“I will discuss it with members of the tribe. It is a national project and I always believe in dialogue, but if things go bad then we usually take to court,” he said.

“In Melanesia, land is your identity, land is your survival; when you don’t have land, or land [is] taken away, you are a stranger in your own land.”

The Solomon Islands is one of the last countries in the world not to be connected to a telecoms cable.

The deal with Australia was signed by Prime Minister Malcolm Turnbull and his Solomon Islands counterpart Rick Houenipwela on his first official visit to Canberra almost two weeks ago, and was hailed as the “best value” deal amid pomp and ceremony. 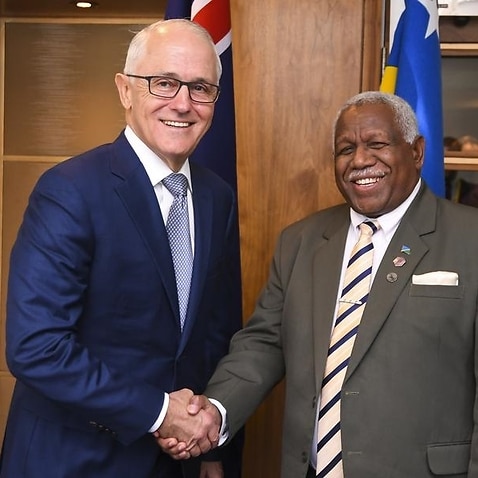 Mr Houenipwela told SBS News he expected the deal to go ahead and to be completed on time.

“I think the advantages we expect from the cable are going to be quite huge,” the former senior World Bank advisor said.

But, he said, he was unaware of landowner expectations for compensation, or of any economic impact assessments conducted on the project, or of a rival Vanuatu cable planned from Honiara to Port Vila, connecting to Sydney, that is already under license. “I’m not very familiar with land issues on the ground,” Mr Houenipwela said.

“The [Solomon Islands] company is dealing with that and the last time I had an update, more than a month ago, the company said we are on track.”

Liberal party donor Vocus was awarded the $136.6 million Australian contract for construction of the cable – connecting both the Solomon Islands and Papua New Guinea – after completing a scoping study for the federal government.

“Total cost of the project is $170m as I understand it, two-thirds of that will be paid by Australia,” Mr Houenipwela said.

Apart from the cable deal, Australian foreign aid to the Solomon Islands this year was $138m.

“I’m just happy we have a special place in their heart,” Mr Houenipwela said. Australia’s intervention has caused upset in neighbouring Vanuatu and its prime minister Charlot Salwai is expected to ask Australia to help pay for its cable when he visits Canberra on Monday.

Critics accuse Australia of distorting the telecoms market in the region by installing a taxpayer-funded cable to Solomons as an aid project, when competitors have to rely on financial market loans with interest repayments.

Interchange, a private company in which the Vanuatu government has a 25 per cent minority stake, declined a request for comment from SBS News. Solomons PM denies Chinese-backed airport will be built on Guadalcanal

Its CEO Simon Fletcher said in a tweet last week: “AU Government is sweetening deal to keep Huawei out of the Solomon Islands and consequently souring the business case of our private-sector-funded Vanuatu to Solomons cable under construction … V.Hard to compete with free cable.”

But for those consumers and business owners on the Solomon Islands, dealing with slow internet speeds and high data costs, the cable can’t come soon enough.

“We need connectively to the outside world. It’s one of the topics everyone talks about and one we can’t wait for,” Adam Bartlett, managing director of Bulk Shop supermarket chain in Honiara, told SBS News.

“What I would like to see is greater adaptation of technology. In our shops, 95 per cent of purchases are cash. If we could move to more of a cashless society, that would add to the safety of our economy.

“And without getting into the politics, we’re just happy the Australians are behind this one.”