Opponents accused Mr Sogavare and his government of lying, looting and using Chinese money to cling to power during a debate over the no-confidence motion brought by opposition leader Matthew Wale. 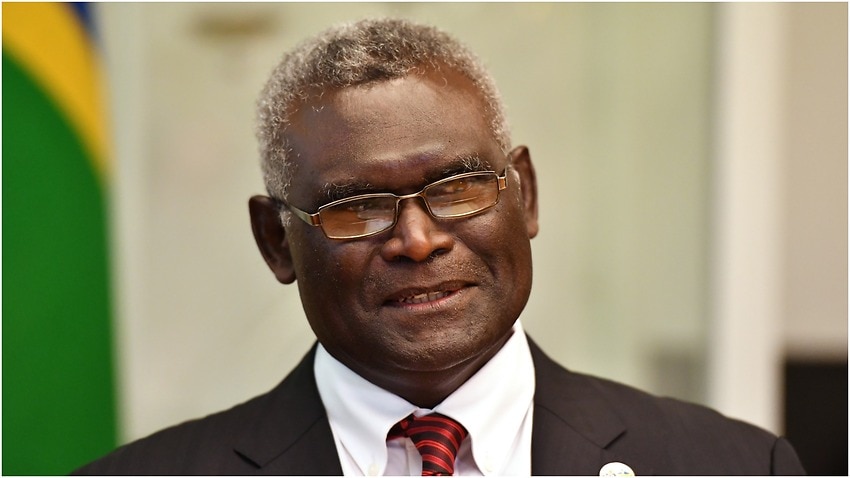 Mr Sogavare told politicians in a fiery 90-minute speech on Monday that he'd done nothing wrong and would not bow down to "the forces of evil" or to "Taiwan's agents".

At one point he picked up his chair and banged it on the floor to emphasise a point.

Mr Sogavare said that if he resigned it would be a message to the nation's young people "that whenever we are not happy with those in authority, we take the laws into our own hands".

"This is a very dangerous message to our people and future generations."

Opponents accused Mr Sogavare and his government of lying, looting and using Chinese money to cling to power during a debate over the no-confidence motion brought by opposition leader Matthew Wale.

In the end, Mr Sogavare easily had the numbers, winning 32 votes to 15, with two abstentions.

The riots in Honiara grew from a peaceful protest and highlighted long-simmering regional rivalries, economic problems and concerns about the country's increasing links with China.

Troops and police from Australia, Papua New Guinea, Fiji and New Zealand have been helping keep the peace at the request of the Solomon Islands government.

Many businesses remained closed in Honiara ahead of the vote over concerns that violence could erupt again, leading to an eerie calm.

A Red Cross vehicle passes through the Chinatown district of Honiara on the Solomon Islands on 26 November, 2021. Source: AFP

Mr Wale told parliament he brought the motion of no-confidence against Sogavare because he had repeatedly lied to the people and used Chinese money to cling to power.

He described a nation plagued by unemployment, exploited resources and "looting at the top."

Mr Wale and other lawmakers spoke at length, using a mixture of English, the official language, and the commonly spoken Melanesian pidgin.

Mr Wale said he was hesitant about even bringing the motion because it "may further add to what are already high levels of anger in certain quarters of our society."

Former prime minister Rick Hounipwela argued that Mr Sogavare needed to go, saying there had been an increase in corruption and that the prime minister was blinded by "anything that glitters."

Health Minister Culwick Togamana said the government had been democratically elected and changing it now would vindicate the rioters, proving that the ends justify the means.

Mr Togamana said evidence of the government's effectiveness could be seen by the fact there was no community spread of the coronavirus.

The Solomon Islands has reported just 20 cases of the virus and no deaths.

The riots and looting targeting Honiara's Chinatown and downtown precincts erupted on 24 November following a peaceful protest in the capital by people from the province of Malaita.

Police fired tear gas and rubber bullets at the demonstrators, who set fire to a police station and many other buildings, leaving four people dead.

Critics also blamed the unrest on complaints of a lack of government services and accountability, corruption and Chinese businesses giving jobs to foreigners instead of locals.

Mr Sogavare angered many in 2019, particularly leaders of Malaita, when he cut the country's diplomatic ties with Taiwan to recognise China instead.

Daniel Suidani, the premier of Malaita, said on Friday he thought the Solomons should partner with Taiwan because they share democratic values.

Ahead of the vote on the no-confidence motion, Australia's minister for the Pacific Zed Seselja said the federal government still expects the deployment to the Solomon Islands to be short-term.

Senator Seselja said Australian Defence Force and federal police personnel were in the Solomon Islands to provide peace and stability amid tensions over the prime minister's China stance.

"Further judgments will be made as to what should be the length of our stay, but it's still our anticipation that it would be a relatively short period of time," he told Sky News on Monday.

Senator Seselja reiterated the government's position that Australia would not intervene in domestic politics, with troops being deployed to stop the country from descending into violence.

Accusations of bribery should be dealt with by the country's officials, he said.

"It's up to the people of the Solomon Islands through their government, through their parliament (which is) ultimately answerable to their people ... to be accountable when there are these suggestions," he said.

"It's up to individual countries as to how they deal with those issues when there are those type of allegations or those type of suggestions."

But new laws passed by the Australia parliament in the past week allow the government to slap Magnitsky-style sanctions on corrupt individuals, banning them from entering the country and freezing their assets.

Foreign Minister Marise Payne did not respond to questions about whether the government would consider Solomon Islands officials as some of the first targets under the new legislation.