A group of young Australians are using the power of music to overcome their challenges.

Rem Jawi oozes confidence as she performs her self-composed song ‘Elhoim’ to a theatre full of family and friends in Sydney’s inner-west suburb of Marrickville.

But it was a very different story for the 22-year-old a year ago.

The Eritrean-Australian was previously battling mental illness and homelessness.

In the midst of her university studies, she ended up couch-surfing at strangers' homes for nine months.

"I was really drained and really confused about what had just happened. My world went kind of the opposite way around," she told SBS News.

"Actually, I didn’t even know that I was homeless. I didn’t know what was going on for me to be homeless." Mission Australia Program Manager Diana Jazic said many people mistakenly picture homelessness as only living out on the streets.

“We often refer to it as ‘hidden homelessness’. It’s not your traditional view of homeless people that are rough sleeping out on the streets but this is a real concern for young people.”

According to the Australian Bureau of Statistics, there are 44,000 people under the age of 25 who are homeless in Australia every day.

The latest Mission Australia report found those with a probable serious mental illness are three-and-a-half times more likely to spend time away from home.

Ms Jawi said coming from a culturally diverse background made it particularly difficult to confront homelessness.

“It just opened my eyes to looking after your mental health and bringing awareness, particularly to my [Eritrean] people because it’s not really spoken about in our community. It’s pushed under the rug.” 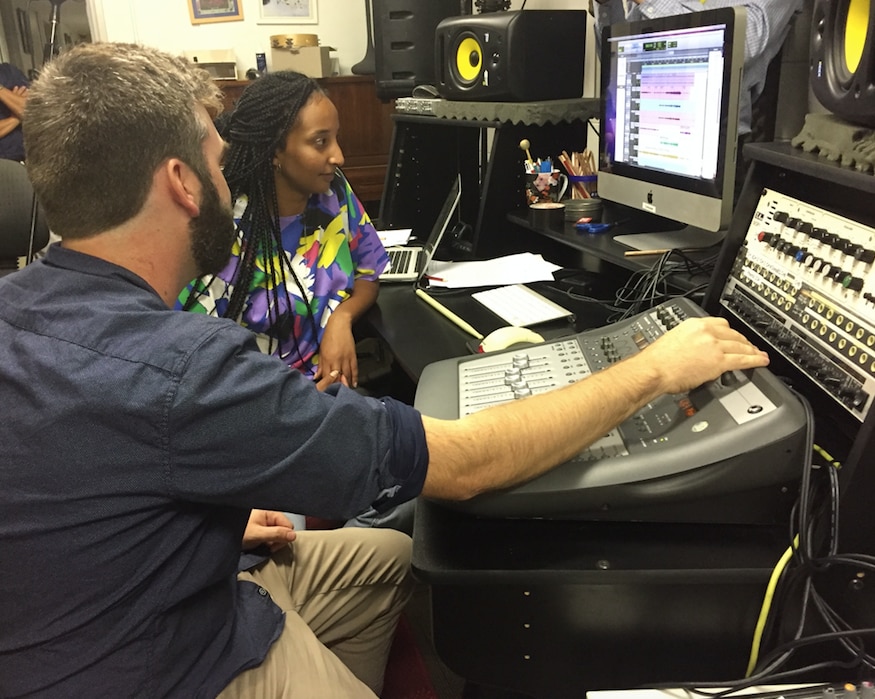 Rem Jawi getting advice about her composition from a music professional at Mission Australia's recording studio.
SBS

Fortunately, she was able to seek help.

While living in transitional accommodation, Ms Jawi's caseworker discovered she had a passion for gospel music and recommended she join Mission Australia’s Sounds of the Streets program.

For six months, she and 13 other young people overcame extraordinary challenges including homelessness, mental illness and family breakdown through the power of music.

Under the guidance of industry experts, each student composed a song inspired by their struggles. They have been compiled in a professionally-recorded album entitled TIPS.

"It felt really good to have routine. Coming here twice a week, interacting with people of my age group in this kind of way was really good for me,” Ms Jawi said. Calls for government commitment to halve youth homelessness by 2020

She created ‘Elhoim’, an “experimental-gospel” song, to reflect her faith.

“It was a big blessing to get into this [program]. I mean the people here are amazing, staff, the teachers, people I’ve met. I’ve made good friends,” she said.

Her teachers have noticed the difference it has made.

“Rem’s gained a great deal of confidence; her self-esteem has increased. She has a beautiful voice, is a talented musician, and those artistic skills have been harnessed and developed,” Ms Jazic said. The young artists launched their music album at a concert in Marrickville, Sydney.
Mission Australia

Graduating from the Sounds of Streets program has inspired Ms Jawi to pursue, and complete, other things.

“I’ve started a few degrees which I didn’t finish, so getting into this ... It was set up to encourage you to finish something.”

First, she is determined to complete a Diploma in Counselling through Open Universities.

It’s an opportunity she believes will allow her to give back what she has learnt.

“I just think that listening to others is something that can really help people. Some people, all they need is an ear.”