Despite needing to trace and isolate a whole new group of close contacts, the state will begin relaxing restrictions, with family groups allowed to exercise together effective immediately.

South Australian Premier Steven Marshall has said he is "fuming" after a confirmed case at the Woodville Pizza Bar deliberately misled the state's contact tracing team.

"Their story didn't add up. We pursued them. We now know that they lied," Mr Marshall said on Friday.

"The selfish actions of this individual have put our whole state in a very difficult situation. His actions have affected businesses, individuals, family groups and is completely and utterly unacceptable."

The infected person told contact tracers they had gone into Woodville Pizza Bar to purchase a pizza rather than working at the shop for several shifts.

According to the Premier, the emergency management act requires people to provide information on request but there is no penalty for failing to truthfully answer those questions.

Despite needing to trace and isolate a whole new group of close contacts, Mr Marshall has announced the state will begin relaxing restrictions, with family groups allowed to exercise together effective immediately. "The consequence of this lie, is that we are in a six-day lockdown," Police Commissioner Grant Stevens said.

"As of midnight Saturday, we will be reverting to a series of restrictions which are very similar to the ones that were imposed at the beginning of this week.

"Premises will be restricted to a density of one person per four square metres [and] will be limited to 100 people in hospitality premises, table bookings will be still limited to 10 people." 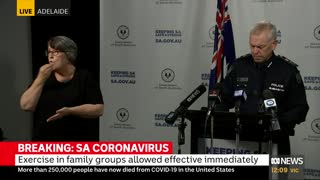 "We are also aiming, on the basis that we are able to put a ring fence around this current level of activity, that we will revert to where we were last Friday, in terms of the level of restrictions that we had in our community, on 1st December at the same time that we are planning to relax borders for the Victorian-South Australian border."

On Friday afternoon the Northern Territory government said it would remove all coronavirus hotspot declarations for South Australia from Saturday.

People already in quarantine in the NT will be tested for COVID-19 on Friday and have a general health check before being released. About 70 people brought from Alice Springs to Darwin will be returned to Alice Springs if they wish.

Meanwhile, Victoria has gone three weeks without a new COVID-19 case or death, as it looks to recommence its hotel quarantine program.

A government spokeswoman on Friday confirmed the state will begin receiving international arrivals from 7 December, with an initial cap of 160 travellers per day.

The program was suspended in June and an inquiry was called after multiple coronavirus outbreaks were linked to infection control breaches among workers at the Rydges and Stamford Plaza hotels.

The outbreaks sparked Victoria's second wave, which resulted in more than 18,000 infections and 800 deaths.

The hotel quarantine inquiry has made 69 interim recommendations to improve the program, including allowing some returned travellers to quarantine at home.

The spokeswoman said the government will release further details about the "reset" program and its response to the interim report of the inquiry "soon".

There are two active coronavirus cases remaining across Victoria, according to figures released by the health department on Friday. However, investigations continue into a weak positive test result that may be a case of virus shedding.

The last time Victoria recorded a three-week streak of no new cases was in February.

The virus-free results continue for Victoria as a "hard border" with virus-hit SA came into effect overnight.

It will remain in place until Sunday when a permit system is implemented.

The 48-hour shutdown was prompted by the unexpected detection of virus fragments in wastewater at the regional Victorian centres of Benalla and Portland.

Both locations are along freight corridors, and the results emerged amid Adelaide's growing cluster.