Foreign officials from Australia, the US and Japan have raised shared concerns about developments in the South China Sea at a meeting in Singapore.

Australia, the US and Japan have expressed serious concerns about developments in the South China Sea at a trilateral meeting in Singapore.

The use of advanced weapons systems in disputed areas was among the issues raised when Foreign Minister Julie Bishop met with her Japanese counterpart Taro Kono and US Secretary of State Mike Pompeo.

"The ministers voiced strong opposition to coercive unilateral actions that could alter the status quo and increase tensions," a joint statement following the Trilateral Strategic Dialogue on Saturday said.

China and a number of southeast Asian nations have overlapping claims to islands and other features in the sea, which is one of the world's busiest waterways.

Despite sharing their concerns, Ms Bishop, Mr Kono and Mr Pompeo acknowledged progress towards a code of conduct for the hotspot.

They called for the code to be in line with international laws and strengthen the commitments of those involved to stop actions that could escalate disputes.

Singapore's foreign minister said this week southeast Asian nations and China had reached a "milestone" in talks over the code, with a working text serving as a basis for future negotiations. 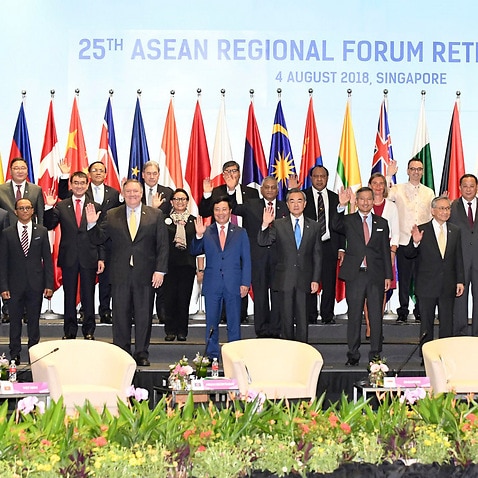 At the eighth trilateral meeting between Australia, the US and Japan, ministers also shared their concerns states are increasingly turning to malicious cyber activities to achieve their goals.

They committed to work together to deter and deal with such behaviour.

"The ministers affirmed that the rules-based international order must encompass online activities," their statement said.

North Korea was also on the agenda, with the trio reaffirming their commitment to the rogue state's final, fully-verified denuclearisation, and welcoming its recent discussions with the US.