Stranded in Australia away from family, these Pacific seafarers face a difficult dilemma

Dozens of seafarers from Kiribati remain locked out of their country and grounded in Queensland after more than two years away from home. But facing uncertainty on their return, some are pleading to stay in Australia to better support their families. 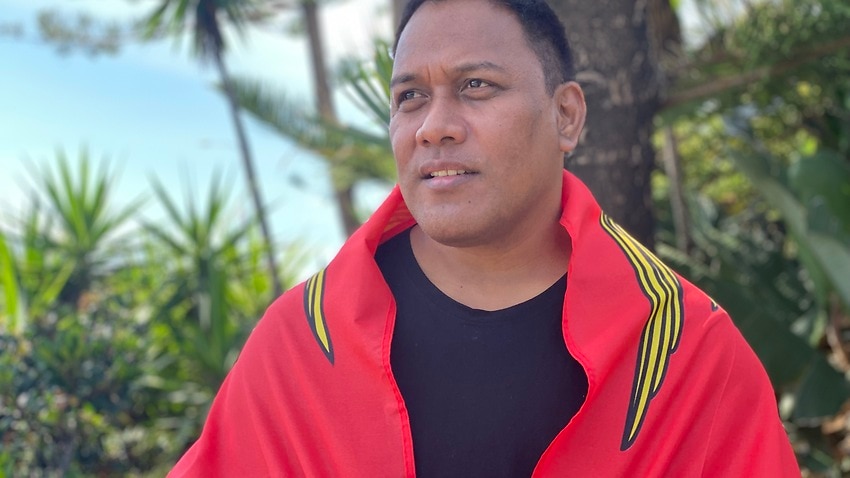 As Australia and much of the world reopen their borders, a group of merchant seafarers from the tiny Pacific Island nation of Kiribati remain stranded in Queensland and locked out of their COVID-free country.

The 38 men have been away from home for more than two years working on ships and then stuck in Brisbane, and now face a difficult dilemma that could render them jobless on their eventual return or keep them separated from family.

They are some of the estimated hundreds of seafarers from Kiribati waiting around the world to go home as international borders open while theirs remain closed.

“I always hear from the boys sharing their problems with their families back home [they] are feeling really bad, especially when they hear the voice of young kids always saying, ‘daddy we miss you so much’,” said Bwerentetaake Toanuea, a spokesman for the group.

The 46-year-old has been a ship’s cook for more than 20 years and is close to tears thinking of his family almost 4,000 kilometres away in the Pacific.

“I am a family man. My wife and three kids, being away from them so long, it is too hard. I miss them a lot,” he said.

Hundreds of seafarers from Kiribati travel the world for up to a year at at time aboard cargo vessels.

They remit millions of dollars in wages every year, supporting their families and making a major economic contribution to their nation.

During the COVID-19 pandemic, some have worked back-to-back contracts of up to 18 months at sea only to become marooned in countries such as Germany, South Korea, Indonesia, Fiji, and Australia.

With its COVID-free status, Kiribati's border remains closed and the country has not made it easy for the 38 men to return home.

Their jobs also look likely to have disappeared.

They first arrived in Brisbane in April and they have lived in a hotel paid for by their employer, the Danish shipping line Maersk, on temporary maritime visas that forbid doing paid work.

Pauro Teipi and some of his friends have regularly volunteered at the Queensland Maritime Museum on Brisbane’s Southbank, cleaning the historic dry dock to keep themselves occupied.

When SBS News visited them earlier this month, the men had just received their second COVID-19 vaccinations.

“We are very happy and excited to work here voluntarily in this museum. We do the same job on the ships, washing, cleaning,” Mr Teipi said.

“It’s very hard for us. We don’t know what time we go home, what they plan for us. [But] this is good exercise for us and for our mental health.”

The HMAS Diamantina in the dry dock has a special connection to their home - it was the ship on which the last Japanese surrenders of the Second World War were signed, including for Kiribati.

The Mission To Seafarers, an international organisation offering social support to ship crew, has been looking after the men, connecting them to the local community, organising day trips to the beach and trying to get them home.

Former marine pilot Ross Nicholls is the president of the Brisbane chapter. He found the men by chance via a social media post and brought them to the Seafarer Centre in the Port of Brisbane.

“It’s heartbreaking to see a grown man crying because he hasn’t seen his son grow up and the only contact they have is over social media,” Mr Nicholls said.

“It turns out the only reason they can’t get back home is their government won’t open the border, not even a crack.

“Queensland, unbeknownst to many people, has repatriated about 12,000 seafarers in the last 12 months. It’s been the only port until very recently where they’ve been allowed to come off ships, and transit through.

“So I’d be saying to the Kiribati government, of all the ports in the world, this is one of the safest and you could put them on a plane and fly them home.”

Ross Nicholls from the Mission To Seafarers has been trying to co-ordinate repatriation. Source: Stefan Armbruster/SBS News

Mr Nicholls brought together the Kiribati government, the Department of Home Affairs, the Australian Maritime Safety Authority, Queensland Health and other agencies to try and broker their return, so far to no avail.

The seafarers in Brisbane have fared better than almost 200 who have languished in Fiji - which saw a spike in COVID-19 infections earlier this year - for the past 11 months in impoverished conditions, and most of whom have been unsupported by their employers for food or accommodation.

Fiji is the main hub for travel to Kiribati, and the seafarers’ contracts and support technically ends when they arrive there.

Most of those there have this week boarded a cruise ship on which they will quarantine during a 2,000-kilometre journey which they hope will see them allowed to disembark at home.

Some of the volunteers at the Queensland Maritime Museum. Source: Stefan Armbruster/SBS News

Those in Brisbane have fared better, with their employer paying for their accommodation, food allowance and a very basic rate of pay.

“Maersk is fully committed to abide by the Maritime Labour Convention as well as safeguard the well-being of our seafarers. Since early 2020 we have managed to repatriate some 180 out of a total of 230 Kiribati seagoing colleagues in our fleet (around the world),” Maersk said in a statement.

“The situation is desperate as some have not been home for more than two years, reconnecting them with their families and loved ones as soon as possible is our main priority. While our colleagues remain in Brisbane we will continue to take care of them.”

“Sadly, and to our disappointment, our efforts with the Kiribati authorities still has not produced a successful outcome.”

'Once we get back home, we lose everything'

With Queensland’s borders due to open shortly, the men fear a potential increase in the number of COVID-19 cases could lock them out from home indefinitely.

“Our government can say, 'no, seafarers who are staying in Queensland, don’t let them come into the island',” Mr Toanuea said.

Kiribati has a very low immunisation rate and the country's main supply is China’s Sinopharm vaccine, suspicion of which is blamed for a high level of hesitancy there.

There are plans to fly the men to Fiji - but most do not want to go after the experience of their colleagues there recently.

“The majority of the crew wants to stay in Brisbane, the company is still paying us with our monthly basic wage. Once we get to Fiji, everything will all be [stopped],” Mr Toanuea said.

Read More
The seas are coming for us in Kiribati. Will Australia rehome us?

When the men return to Kiribati they also face a very uncertain future, with shipping agents pulling out of the country.

“For Maersk it is unsustainable to employ seafarers who cannot return home to families and loved ones to rest and recharge before the next posting,” the company said.

“Thus, the unexpected unwillingness to cater for repatriation has created many serious problems for our Kiribati colleagues and families as well as our own operations.”

Mr Toanuea is scared for his job, earning about $10,000 per year, and future opportunities for the next generation.

“We want the government to let the border open so that international flights can run smoothly and then there will be no more problem with the seafarers going out to work,” he said.

“Being a seafarer is a big opportunity for all the men from the islands, that’s the only chance they have to get a job and support the family.”

“When we go home we can do house work, fishing, collecting coconuts, cash crop in small farms, just enough to feed the family,” he added. “Once we get back home, we lose everything, lose our jobs, and we cannot support our families.”

Kiribati is also one of the nations on the frontline of the existential threat of climate change and it is affecting sustainability and food security.

The men have been talking and learning about Australia and are prepared to make a huge sacrifice and stay in the country to keep supporting their families - if they're allowed.

Kiribati is part of Australia’s Pacific seasonal worker program and last month a number of their fellow citizens arrived to be employed in aged care in Queensland in remote Aboriginal communities such as Mornington Island.

Australia is suffering a severe labour shortage due to international border closures.

“What will be much better is staying here and looking for jobs, whatever we can take, like fruit picking,” Mr Toanuea said.

“Most of the crew, they want to work as seasonal workers here so they can continue on to support their families back home. We ask Australia for us to get a job here.”

SBS News contacted the Department of Education, Skills and Employment - which oversees the seasonal worker program - for comment, and was referred to the Department of Foreign Affairs and Trade, which did not respond.

The Kiribati government did not respond to a request for comment.