The former president of Mexico, Vicente Fox, has something to get off his chest - again.

After catalysing one of the more poignant viral hashtags at the beginning of this year, Vicente Fox has returned to deliver a message to the President of the United States amid the noise surrounding James Comey's testimony.

"Mexico will not pay for the f----- wall," Fox opens the video, shared on social channel Super Deluxe.

"Donald, under no circustances will we pay for this stupid, useless, racist monument."

The video, posted on Wednesday, has since amassed more than 21 million views, surely in part due to the former president's directness.

"I know when you came up wih the idea, all the experts thought it would work.

"But the 'bad hombres' have gotten more sophisticated since then. They are even sharing plans on the internet," he said, holding up a hand-drawn "schematic" of a ladder.

"Be honest, Donald. This wall isn't going to stop anyone who really wants to cross the border. It's just going to make your country weaker, and poorer, and less respected by the rest of the world."

In January, the day after Sean Spicer proclaimed Mexico would fund Trump's vision of the wall, Mr Fox tweeted, "Mexico is not going to pay for that f------ wall," punctuated by the hashtag #F------Wall.

Sean Spicer, I've said this to @realDonaldTrump and now I'll tell you: Mexico is not going to pay for that fucking wall. #FuckingWall

However this time, Mr Fox extrapolated, detailing ways in which the US could better spend the estimated $25 billion it would cost to construct the border wall - roughly $10 billion more than was initially quoted.

"For $25 billion, you could provide clean drinking water to the entire planet for three years," he says in the video. "Isn't that a better legacy than a pointless wall of hate?

"Here are some other options for the $25 billion: you could end world hunger for one year; you could hire 50,000 teachers for a decade, or pay for the college educations for 250,000 students."

Mr Fox also rubbished the conditions upon which the US stipulated Mexico would build the wall.

"What would be the point of us paying for something beautiful, if we cannot even see it? That would be like marrying a model who won't even sleep in the same city as you," he says in the video.

Fox then turned to a framed photo of a young Donald Trump.

"Donald, instead of building a wall, build a bridge across the oceans of time, and walk back across it to find this small boy and tell him, and tell him, that just because his father doesn't love him, doesn't mean he cannot love the world."

Mr Fox was president from December 2000 until November 2006, the first leader of Mexico's National Action Party to be elected into the position.

While the party is associated with a more conservative political stance, the party does not consider itself fundamentally conservative, developing contextually responsive, rather than ideologically-driven policy. Trump has released his plan for getting Mexico to pay for the wall, and it's as bonkers as you would expect Mexico 'won't pay a cent' for US border wall: official 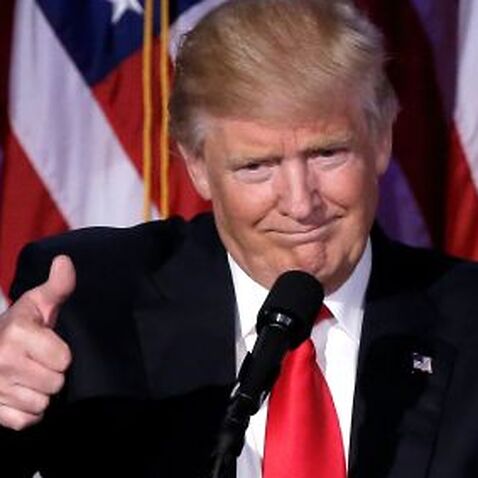