Taika Waititi, who was born in Raukokore, New Zealand, is the first Oscar winner of Maori descent.

Hollywood's biggest night has seen its first Oscars gong awarded to someone of Maori descent.

Writer-director Taika Waititi accepted the best adapted screenplay honour for his satire Jojo Rabbit, about a young boy corrupted by fascism during World War II who finds a Jewish girl living in his attic.

The film is an adaptation of 'Caging Skies', a novel by Christine Leunens.

"I dedicate this to all the Indigenous kids in the world who want to do art and dance and write stories," Waititi said.

"We are the original storytellers and we can make it here as well."

Seizing his moment in the spotlight, Waititi also commented on the rise of Nazism and contrasted today's environment to that seen at the end of World War II. “Now you’re a Nazi, feel free to have a rally down in the square with your mates.” Waititi plays an imaginary version of Adolf Hitler in the movie, which he said he made in "a response to a resurgence of hate and intolerance and hate speech".

The Oscar winner's decision to parody one of the most reviled figures of the 20th century was not without criticism.

Kiwi prime minister Jacinda Ardern was quick to defend Waititi, saying Jojo Rabbit was "a movie for the right time." "We still see many groups targeted, but specifically the Jewish community continue to be a target of intolerance, violence, and racism," Ardern said.

" It is an issue that we need to keep addressing. I think he's right to raise it."

Waititi said winning the respect of legendary Jewish director Mel Brooks gave him as much pride as the Oscar itself, given the film's delicate subject matter. 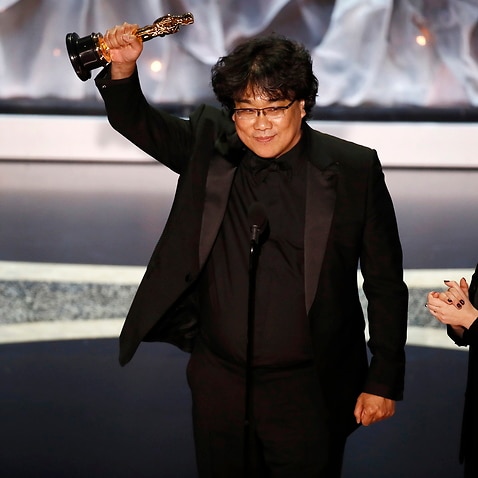 The Oscar award is Waititi's first win at the event but not his first nomination.

The actor, director and writer was also nominated in 2005 for the short film Two Cars, One Night.

Jojo Rabbit received nominations for a total of six Oscars, including best picture.