For hundreds of Tamil families still searching for loved ones who disappeared during Sri Lanka’s civil war, the election of Gotabaya Rajapaksa as the country’s new president only adds to their suffering.

It’s been more than a decade since Ariyaratnam Annalutchmi saw her son.

She says during the final years of Sri Lanka’s civil war, he was abducted by government forces.

“There was a phone call. My daughter-in-law answered. We were told my son had been taken away in a white van,” she tells SBS News. 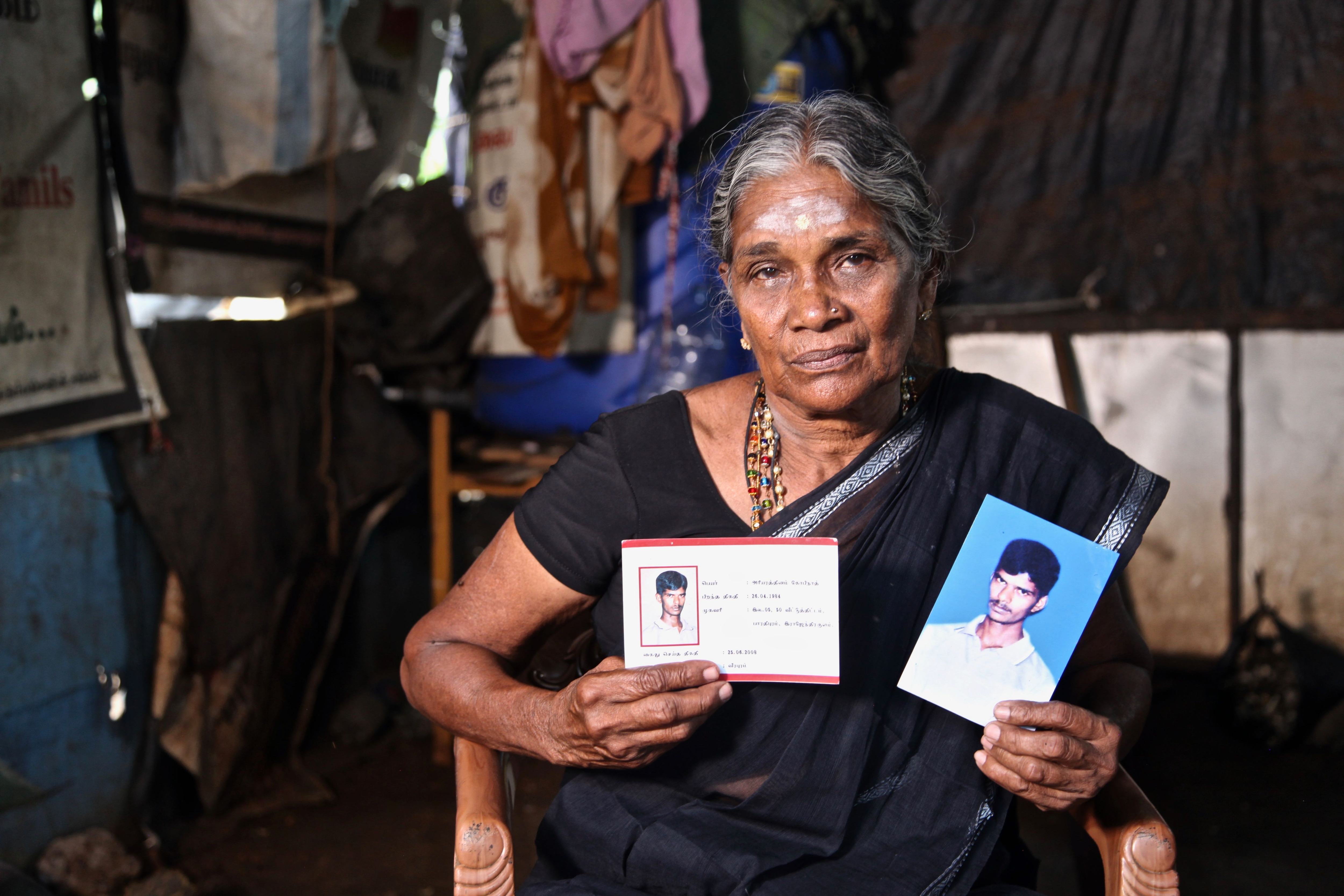 She is one of hundreds of Sri Lankan Tamils still searching for loved ones since the war ended a decade ago.

“On June 25, 2008, he was abducted. On the next day, I reported it to the human rights organisations, the police – over two or three days I went to every relevant person. But they did nothing”.

The United Nations found credible allegations of war crimes by both sides during the brutal conflict. It’s a tormented time in Sri Lanka’s history from which the country is still healing and searching for resolution.

About 20,000 people, mostly Tamils, are thought to be missing since the war – and no one has ever been held accountable for their disappearances. Their families, with no answers and diminishing hopes of ever knowing what happened, fear their missing loved ones are victims of enforced disappearances, allegedly orchestrated by the Sri Lankan government.

Every day, they gather in roadside shacks across the country, sitting continuously for more than 1,000 days – a silent protest to demand answers and accountability for their loved ones. Many Tamil families are still searching for their loved ones.
Aaron Fernandes/SBS News

“They threw my daughter into the van. My daughter was crying ‘don’t let me go, mother’. What could I do? I was helpless.”

After the weekend’s presidential election vote, the grave fears of Tamil communities across the country were realised.

Gotabaya Rajapaksa, the man accused of being behind a violent crackdown on Tamil separatists in the final years of the civil war, and alleged to have orchestrated the disappearances of political opponents, journalists and civilians, was elected president.

Gotabaya has consistently denied any knowledge or involvement in the disappearances and war crimes. 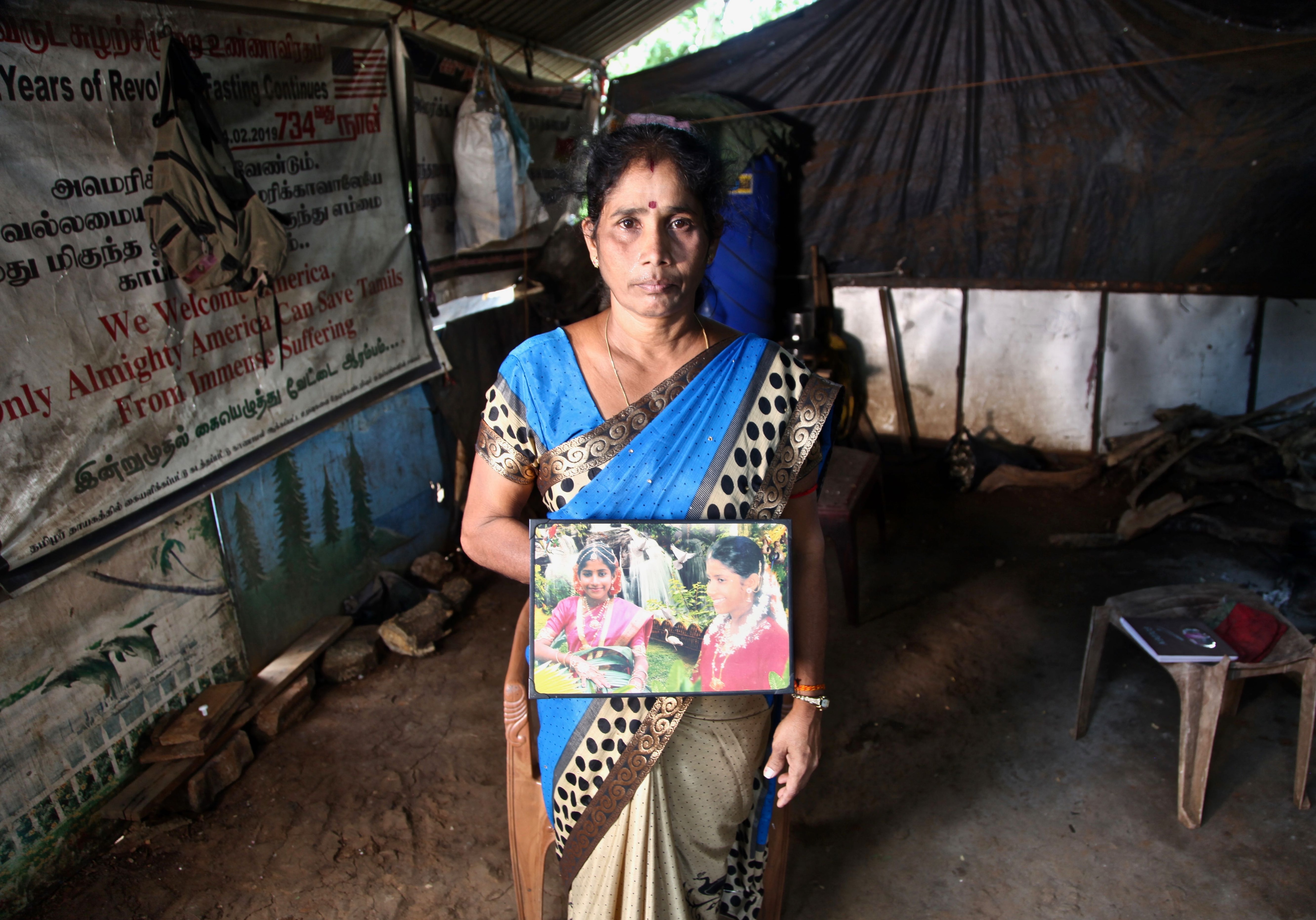 When Mahinda Rajapaksa was elected president of Sri Lanka in 2005, he installed his younger brother as secretary of defence.

Gotabaya had spent more than two decades serving in Sri Lanka’s military, deploying many times to the north of the country to fight against the Liberation Tigers of Tamil Eelam (LTTE).

When the brothers came to power, they resolved to oversee the final defeat of the Tamil separatist organisation - a task previous governments had attempted but failed.

By the war’s end in 2009, the Rajapaksas had emerged victorious, national heroes among Sri Lanka’s Sinhalese majority.

When Mahinda Rajapaksa lost the presidency in 2015, the United Nations urged the new government of Sri Lanka to pursue justice for families.

Investigations into the thousands of alleged enforced disappearances during the Sri Lankan civil war appeared likely when the Office of Missing Persons was established in Colombo in 2017.

As of this weekend, the younger brother Gotabaya is now president, with Mahinda expected to be installed as the country’s prime minister.

To date, the Office of Missing Persons had achieved little by way of opening and concluding investigations. 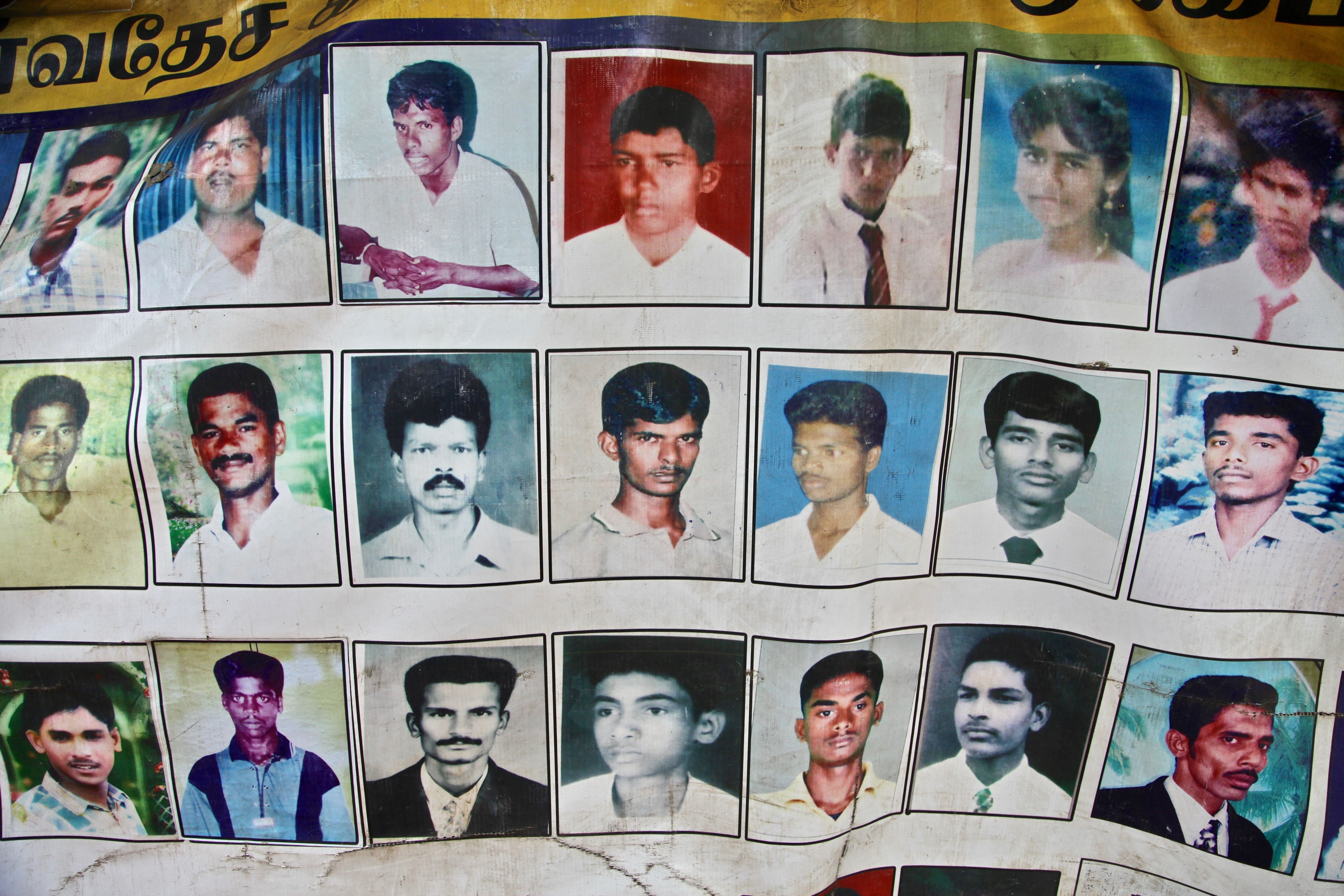 About 20,000 people, mostly Tamils, are thought to be missing since the civil war.
Aaron Fernandes/SBS News

During the election campaign, Gotabaya campaigned strongly on national security and promised to withdraw Sri Lanka from an agreement with the United Nations to investigate war crimes.

But during his speech after the official announcement of results, the new president brushed aside concerns that his term will see the further erosion of human rights for Tamil minorities. "Therefore I am well aware that I am bound to serve every Sri Lankan irrespective of race or religion."

But allegations of war crimes have not been forgotten among Tamil communities in the north and east of the country.

The 2019 presidential elections were the second time Sri Lankan Tamils voted in a presidential race since the end of the war.

They voted overwhelmingly in favour of Sajith Premada, a former housing minister, from the ruling United National Party. As many expected, the vote was hopelessly divided along ethnic lines. 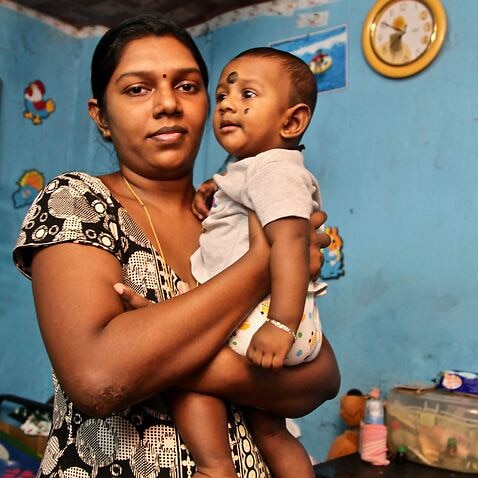 Among Sri Lanka’s Tamil communities in the north and east, support for Gotabaya Rajapaksa dipped to as low as five per cent.

But in the south, among the majority Sinhalese voters, it soared to over seventy per cent, leaving him with 52 per cent of the vote and a comfortable election victory.

It’s a result that has left many in the country reeling. 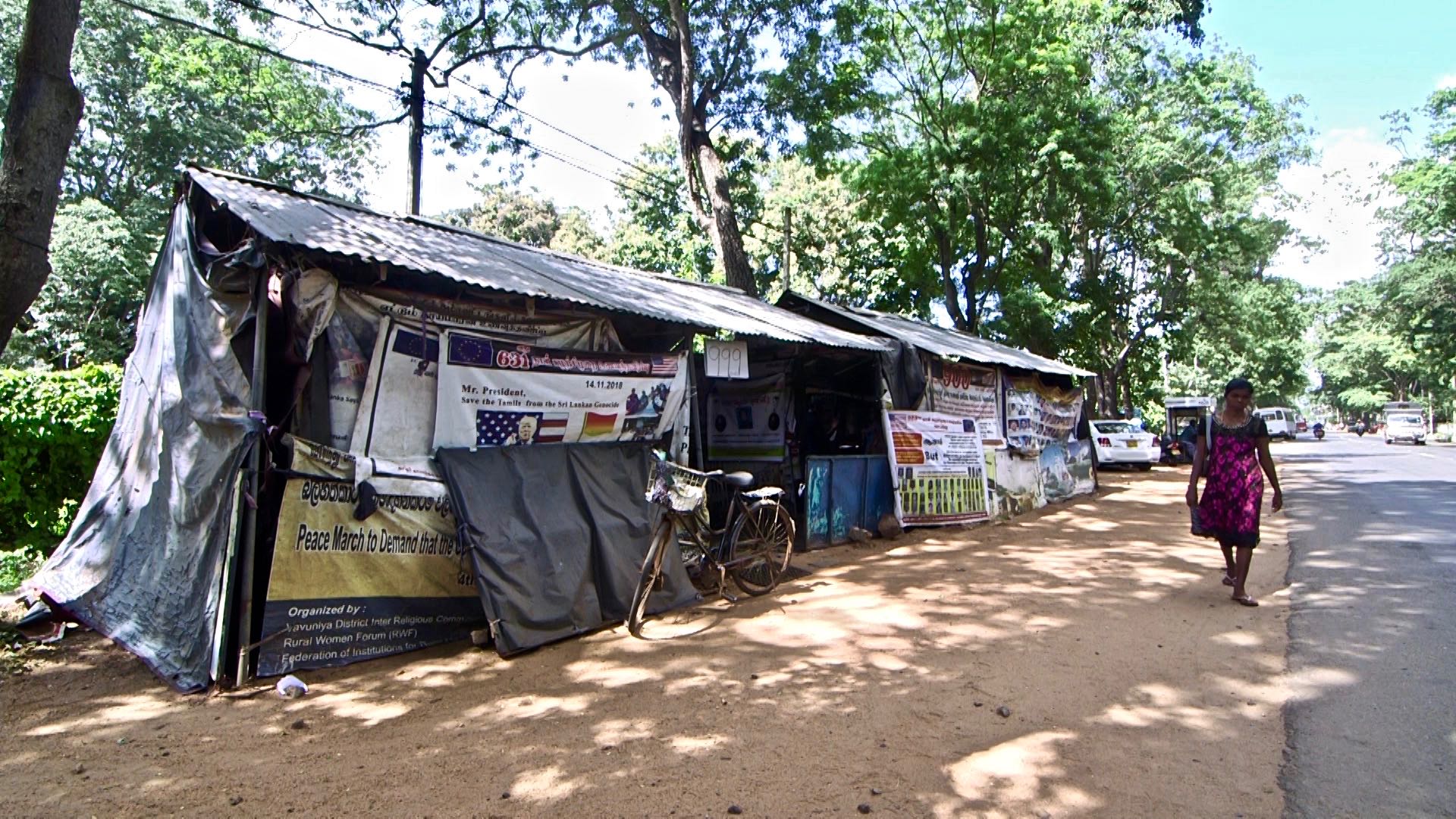 Dr Pakiasothi Saravanamuthu is the executive director of the Centre for Policy Alternatives in Colombo.

“This country is therefore always going to be at war with itself. And therefore it doesn’t heal. And if it doesn’t heal we will not have the unity necessary to achieve the prosperity which we all believe we deserve.”

He says much of that fear stems from not knowing what happened to those that disappeared during the civil war.

“[Sri Lankan Tamils] place a lot of emphasis on the question of the disappeared, because a lot of the people say, ‘we saw our loved ones on such-and-such a date, they went, we haven’t heard anything about them since’,” Dr Saravanamuthu says.

“Then there is the question of those who surrendered at the end of the war – they saw them surrendering. What happened to them?” These women have staged a silent protest to demand answers.
Aaron Fernandes/SBS News

Until that changes, the families of the disappeared say they have no choice but to sit and wait.

“We are doing this not only for our children, but all those children that are missing, in the hope they’re still alive. For that, we sit here. We need closure, answers should be given. Our children should be released”.

A hope that one day, the truth will be known.