Home for Ramonde Wong is a two-bedroom Sydney unit shared with up to nine other people - mainly international students - a situation he calls “a very elaborate backpackers”.

“It’s quite a novelty,” the New Zealander tells SBS News during a tour of the inner city Surry Hills apartment, “until the novelty wears off”.

Up to three people sleep in each of the bedrooms. More than half the main living space is cordoned off by large barriers - that’s for another three makeshift bedrooms. One flatmate has taken over the narrow enclosed balcony; their unmade single bed jammed into one corner.

“This is one of the showers here, that’s shared between seven people,” Mr Wong, 50, says. 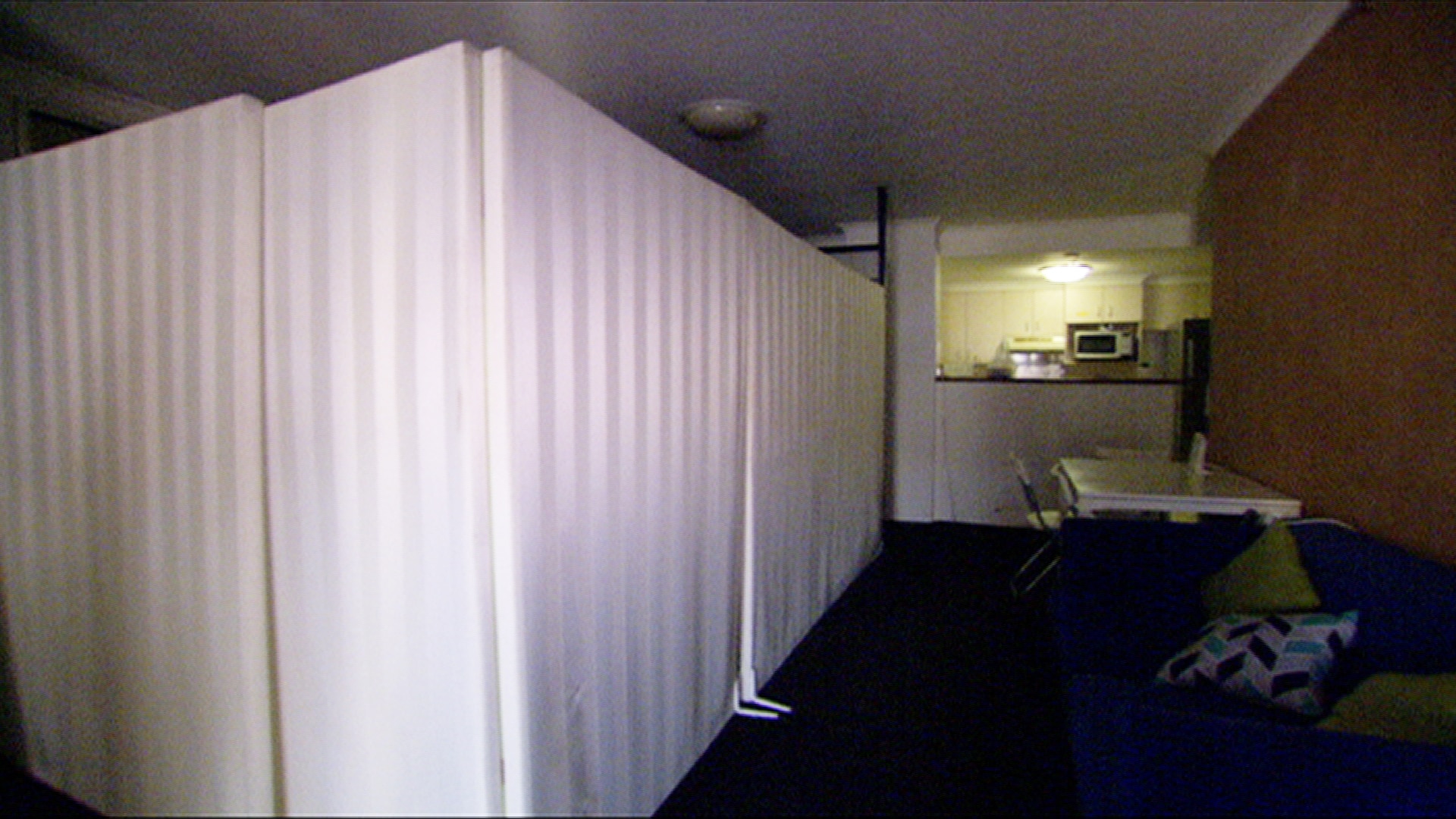 Room dividers in a two-bedroom unit housing up to 10 people in Surry Hills, Sydney.
SBS News

This is what home can look like for those living on the margins of affordability in Australia’s cities, where a lack of security is the price that many are forced to pay to be close to their university or work.

The number of people living in “severely” crowded dwellings in NSW skyrocketed by 74 per cent in the five years to 2016, according to ABS data released this month.

Nationally, migrants comprised almost half (47 per cent) of all people living in overcrowded housing in 2016 - up from less than a third (31 per cent) five years earlier.

Those arriving from India, China, Afghanistan and Pakistan account for half of this migrant group, who also dominated the 19-24 and 25-34 age groups. A makeshift bedroom on an enclosed balcony at a unit in Surry Hills, Sydney.
SBS News

Mr Wong and his flatmates pay about $200 a week each to share the unit that he estimated would otherwise be rented out for about $600 and $800 a week.

He considers those sharing his home of eight months to be the lucky ones. “This is one of the cleaner, more modern, spacious apartments that can actually accommodate the numbers,” he said.

“I’m not going to complain about it; it is actually one of the best ones I’ve seen so far.”

SBS News uncovered dozens of advertisements for similarly cramped share accommodation on classifieds site Gumtree over the past month, as well as other postings on Weibo specifically targeting Chinese students.

“The apartment is five minutes walking distance to RMIT and 15 minutes to Melbourne University,” one Weibo post reads. A one-bedroom apartment in Sydney’s Clarence Street, leased out by a real estate agent in September for $645 a week, is now being advertised on Gumtree as a home for up to eight people.

A tour of the apartment by SBS News revealed up to four people slept in the living room, each bed separated by curtains and cardboard partitions. The bedroom was packed with bunk beds to accommodate four.

The going rate for each tenant is $150 a week. By contrast, a bed in a twin-share studio apartment in nearby specialist student accommodation, Urbanest, is priced from $354 a week.

The Clarence Street apartment’s property manager said he had inspected the property “several weeks ago” and that there had been a “standard one-bedroom set-up.”

“The owner is not aware, the agent, myself, is not aware [that it was being sublet]. We can only do inspections annually or whatever the standard is,” he said, adding the issue of overcrowding was not “uncommon” in the city.

“It’s just the nature of that market in the CBD where it does happen because you’ve got groups of people from overseas, Asian countries and the rest, that’s how they do it back home and it could happen here as well,” he said.

That’s how they do it back home and it could happen here as well.
- Sydney property manager

In the same building, a two-bedroom unit was on offer for nine people. While in yet another apartment inspected by SBS News - this time in the Sydney suburb of Chippendale - eight beds were set up across two bedrooms.

When contacted by phone and asked whether they were aware the living arrangements were potentially illegal, the person who arranged the Chippendale inspections for prospective tenants said they couldn’t hear the question and promptly hung up.

“It is squalor,” said strata lawyer and Owners’ Corporation Network chairman Stephen Goddard when shown footage inside the apartments taken by SBS News.

“It’s the worst of what can happen with high-density living.”

Leo Patterson Ross from the Tenants Union NSW said affordability was the main issue for international students caught up in the overcrowding.

“There aren’t individual rooms that are affordable to students and that means they often accept substandard or different kind of living arrangements to be able to afford homes close to their uni or near their work,” he said.

Mr Ross said students were particularly “vulnerable” because they did not have a strong sense of tenancy laws - including that overcrowded units may be illegal.

“There isn’t necessarily information that’s being given to them before they come to Sydney. And they are relying on information shared by friends, or on the internet,” he said.

“We often see people being ripped off by being asked for excessive bonds. For a tenant in NSW the maximum bond is four weeks rent and two weeks rent in advance.”

A City of Sydney spokesman said the city takes overcrowded accommodation “very seriously as it can present fire and safety risks for occupants”.

Previous investigations by the city have unearthed apartments with fire safety defects and illegal modifications to cram in extra beds, blocking exits in the process. Cases can also be pursued for breaching a building's conditions of consent related to building use or occupancy.

Mr Goddard also pointed to the role of strata schemes, which since 2016 have been able to use bylaws to limit the number of people in a unit to two per bedroom. But the buck stopped with those collecting the rent, he said.

“The owner should know to whom they’ve let and for what purpose,” he said. “It’s not good enough for an owner to say, ‘I didn’t know’. If they don’t know, who does?”