Australian Cirque du Soleil star Rima Hadchiti is one of the smallest people in the world. She has been a performer her entire life but only recently has the entertainment industry learned to embrace people with differences, she says. This is her story.

Rima Hadchiti's condition is so rare, it was named after her.

She and her younger brother Imaan, a comedian, are the world's only known cases of Rima Syndrome.

The genetic condition is not technically dwarfism. Instead, it causes small stature, with everything in proportion.

The 37-year-old, who is 100cm tall, says her uniqueness vaulted her into the public eye early on.

"I was exposed at a very young age with all the media around me being such a petite person. It was such a rare condition that I have," she tells SBS News. Hadchiti was born with a genetic condition known as Rima Syndrome.
Supplied.

Hadchiti says even in her early years, she embraced the limelight.

"I have always felt like I'm a bit of a performer. The cameras come on and I'm happy to entertain. It's in my family, it's in my blood. We are entertainers," she says proudly.

"My father is a musician, and so I was always dancing with his music. I did lots of Shakespeare, I did short films and I did music festivals, art festivals, burlesque, cabaret."

Hadchiti has also worked with with the Melbourne Theatre Company, performed as a professional belly dancer and in 2008, she appeared as a contestant on reality TV show Big Brother.

But there was one industry she always avoided.

"I did not want to join the circus because of the stigma it came with for people of short stature," she says.

Today, the circus is virtually her life.

For the past four years, Hadchiti has been part of the world's largest contemporary circus, Cirque du Soleil. Its latest show, Kurios, is currently touring Australia. SBS News sat down with Hadchiti during the Sydney leg of the tour in the city's Entertainment Quarter, where the cast of gymnasts, acrobats, actors, musicians, clowns and hand-puppeteers spend most of their day.

The precinct was transformed into a sprawling metropolis of tents, trailers, a kitchen and dining room, offices and rehearsal spaces, with the entrance lined with 17 national flags, each representing the nationalities of the 47-strong cast.

Backstage, between rehearsals and make-up, Hadchiti explains the team are like a family.

"I love being around different cultures. You sit down at the table in the kitchen and there will be people talking French, Spanish, Russian, all different languages.

"We fit in, not based on our culture but based on us being all artists and entertainers - that's our connection with each other."

Our chat takes place in a large rehearsal tent, where, behind us, gymnasts and aerialists are flipping and falling through the air. In another corner, a man juggles an impressive number of balls in the air.

There is some serious skill in this room, and that's one of the reasons Hadchiti took the job. Talent is what drives this circus, not offensive stereotypes, she says.

"It's not so much shooting a little person out of a cannon and laughing. It's evolved and it's good to be part of that evolution."

"I think the entertainment industry has evolved slowly to having a broader sense of how they perceive people with difference." 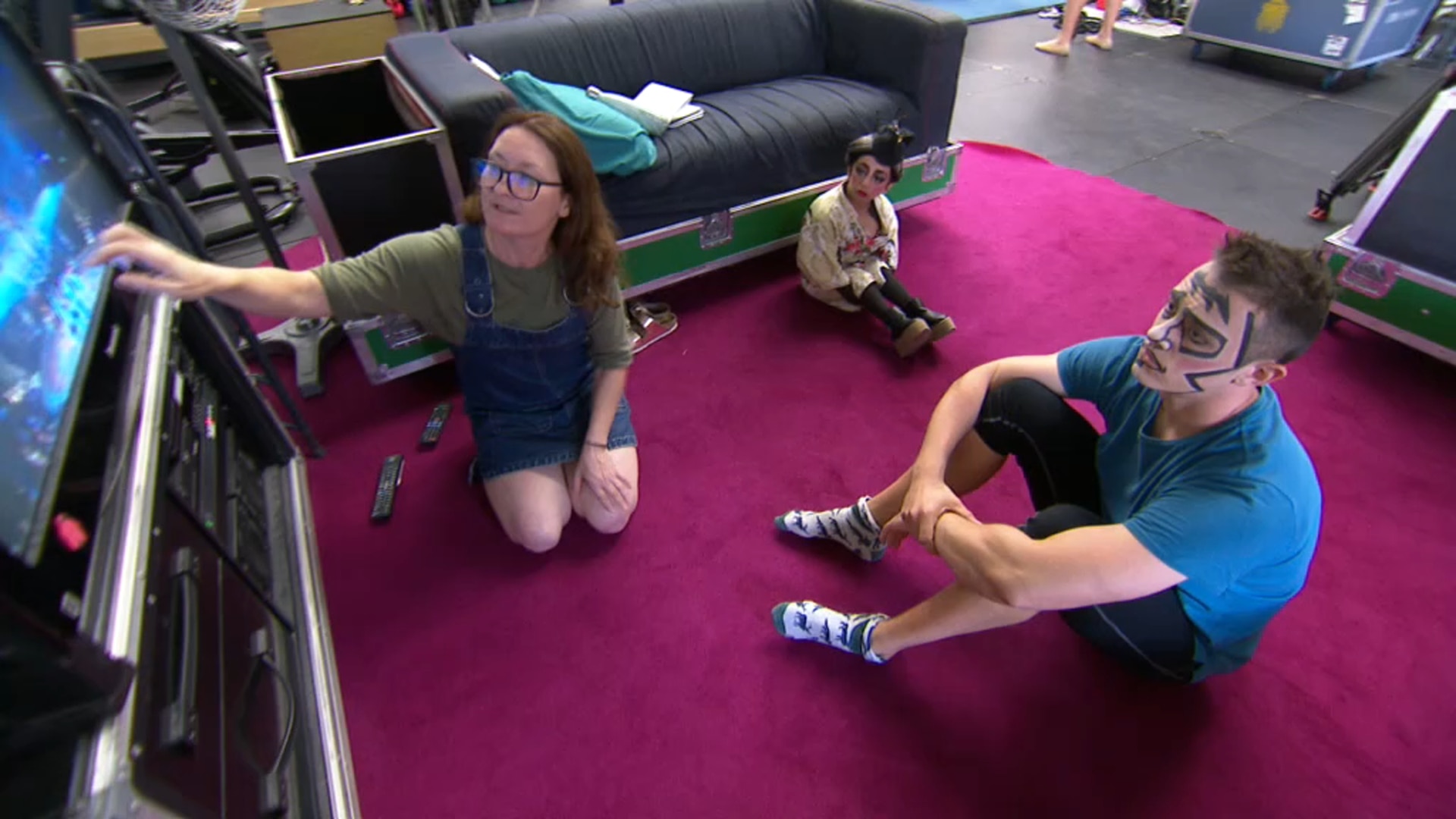 Hadchiti with members of the Cirque du Soleil cast and crew.
SBS News

Hadchiti plays a 1920s Parisian madam, and aside from her name, Mini Lili, there is no reference or play on her size in the show. Rather, Hadchiti draws on her singing, dancing and acting ability to portray the character.

"Mini Lili, she has this elegance but [also] a little bit of humour about her."

"She is very much in control of everyone and all of her surrounds. She is very proud and has a very grand personality," she says, waving her hands gracefully through the air, as if in character.

But while Mini Lili oozes confidence, Hadchiti harbours some insecurities.

"Australia means home for me and when found out we were touring in Australia, I was super nervous, more nervous than when I tour other countries," she says.

"I guess it's because I really care what Australians think and feel of me as a performer."

Born in Adelaide to Lebanese migrants, acceptance was something Hadchiti struggled with during adolescence.

At times growing up, Hadchiti says she felt as though she was straddling two cultures and fitted into neither. The Hadchiti siblings as children.
Supplied.

When she was 10, her family moved back to Lebanon for two years.

"We wanted to reconnect with our roots of our culture. My family wanted me to know where I came from," she says.

"It was quite a culture shock in lots of ways, but it was also a spiritually familiar place. When I landed there I could feel that sense of belonging."

But, feeling the tug of Australia, she was never fully settled.

"It was kind of strange because I really did miss the lifestyle I had in Australia, which I didn't have in Lebanon.  I remember feeling torn." Rima and her brother Imaan, pictured, are the only two people in the world with Rima Syndrome.
Facebook/Guinness World Records

Hadchiti returned to Australia in her early teens, this time, resettling in Melbourne, but life wasn't always easy.

"I went to Lebanon with a naivety ... but I also came back to Australia being naive as well.

"I always felt a little bit on the outside of Australian culture. I was raised around lots of Anglo-Saxon background people and there was the feeling of division," she says.

"I remember being called a wog. And I do remember when September 11 happened I was called a terrorist. There was a lot of fear driven in our schools based on our nationality."

Today that fear is not as prevalent, she says.

"I feel like Australia has gotten better with that. When I speak to my younger cousins and younger family, their experience is more positive than mine growing up as a teenager."

Nine years ago, Hadchiti gave birth to her son, Osirus.

Doctors warned that because of her size, it would be a high-risk pregnancy and Osirus was born three months early at 24 weeks.

"He was born premature so there was a lot of health problems and medical interventions. But we've overcome them," she says.

"It was quite scary, but it was worth it and I cannot imagine my life without him in it. I cannot be more blessed and grateful for my son." Osirus has autism spectrum disorder and cerebral palsy. He lives with his father in Melbourne but regularly visits his mum on location.

Hadchiti says he lives a happy and healthy life.

"The good thing is my son gets to see the world with me because every time I go to a new place he comes and visits me for two weeks to two months.

"He gets to experience that culture and that opens up his mind. Not many children have that opportunity."

For now though, Hadchiti is enjoying being back on home soil for what she says are meaningful performances.

"It has been quite hard to push through mainstream Australia because of my height. There was a lot of stigma around it and there was some hardship around that.

"But I feel like I rised above it and I want to show that. [I have] a sense of pride that I could show them how far I've come and what I can do."

Cirque du Soleil's Kurious is travelling around Australia until August 2020.