The small South Australian farming town of Kimba is split in two by the proposal to host Australia’s first permanent nuclear waste facility. Here, SBS News meets residents on both sides of the debate.

Janet Tiller and her friend Cheryl Miller have recently made one of the hardest decisions of their lives.

They both grew up and have lived most of their lives in the small wheat farming community of Kimba, at the top of the South Australian Eyre Peninsula, with a population of around 800 people.

The women, who both live with their families on farms, have come to the decision that it is time to move on.

“It used to be such a close-knit community, but it’s blown apart.” The nuclear waste facility proposal has divided the town of Kimba.
AAP

Ms Miller says the debate over the proposal for Kimba to host Australia’s first permanent nuclear waste facility has led to so much community division that some people no longer talk to each other.

“It’s not a nice place to live, you don’t want to go down the street because there are people that shun you and won’t talk to you,” Ms Miller says.

For four years, this small town on the edge of the Australian outback has been at the centre of debate, consultation and planning as a potential site to host the facility.

After promises of 45 ongoing full-time jobs and more than $30 million in federal government money earmarked to flow into town projects if the proposal goes ahead, the community last month voted on whether or not to host the site.

Sixty-two per cent of Kimba residents backed the site going ahead in the ballot run by the Australian Electoral Commission, and 38 per cent voted against it.

The public vote was a key final hurdle to indicate community support for the plan and federal resources minister Matt Canavan is expected to make a decision on which site will host the dump in early 2020.

There are three sites that remain on the shortlist, two near Kimba and the other further north near Hawker, in South Australia's Flinders Ranges region.

Support for the facility

Grain and livestock farmer Geoff Baldock is a third-generation farmer in the Kimba region. He and his family farm more than 700 hectares of land here and he is preparing to sell off a small slice of that, around two per cent, to the federal government for them to build their nuclear waste facility.

He won’t reveal exactly how much the government is offering to pay for his land but says the offer has been “generous”.

He says his nominated site is a perfect fit for the facility as it isn’t prime agricultural land.

“It's an amazing opportunity for our local community to find an industry that doesn’t rely on rainfall”.

He hopes the proposal will go ahead and play a vital role in securing the future of the Kimba town, which has been in economic and population decline for a number of years.

He wants his children and eight grandchildren to be able to continue living here and farming the land.

Hopes of a jobs boost

For decades, the federal government has been looking to build one site to store all of Australia’s low-level nuclear waste, which is currently stored in hundreds of small sites across the country.

With three sites on the shortlist and with the majority of the community of Kimba voting in favour, that goal is now within reach.

The federal government has spent four years providing information and consultation with the community here.

Inside the local café, information booklets on the tables provide details on the safety of the facility and the jobs and money it will bring into Kimba. 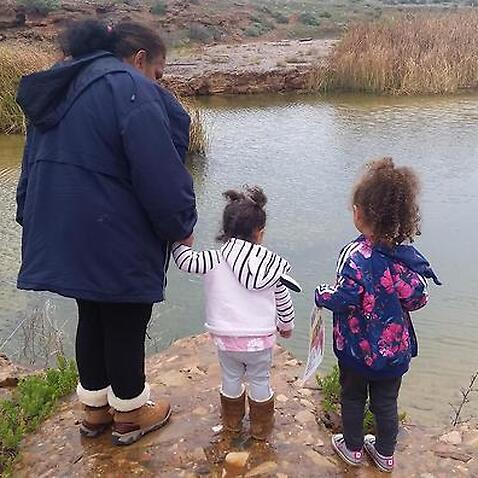 Across the road from the post office, a shop-front has been set up for residents to come in and get information.

But everyone here has already made up their mind. Everyone has an opinion and the community remains divided.

Opponents of the proposal are deeply distrustful of the federal government and the promises made by politicians and scientists on government-paid salaries. They want independent scientists brought in to the safety assessments of the site.

The proposal has split friendship groups and families. Some of those opposing the project say they no longer shop at a local supermarket because the owner is in favour of it, instead choosing to drive to the next town for their weekly shop. Supporters of the nuclear waste facility at the local pub, including Geoff Baldock (centre).
SBS News

At the town’s local pub a group of supporters of the project are gathering in the dining room.

Heather Baldock tells SBS News she hopes the injection of government grants and jobs will provide much-needed revitalisation and grow the town’s population into the future.

“This really does allow our community to remain strong, some of our businesses along the main street are struggling to have an additional customer base would be fabulous,” she says.

But others, such as farmer Jack Larwood, are skeptical about of the government’s promises.

“You just can’t believe them [the government] and what they say is happening,” he says.

The debate has also got ugly. Supporters and opponents of the proposal both say they have received regular threats in the mail, including some death threats.

One night in November, a few days before SBS News visited Kimba, a farmer who is a a vocal opponent of the project had his fence smashed in by a vehicle. He believes it was an intentional act in relation to his opposition to the plan.

“Police are aware that there are heightened tensions among the residents of Kimba as a result of the debate surrounding the proposed nuclear waste facility.  Whilst the debate has been spirited, there is no evidence of crime increasing in this community as a result,” Mr Bahr said. When asked if the promises of jobs and money for the town was worth the community division it had caused, District Council of Kimba mayor Dean Johnson rejected the premise of the question.

The public vote in the town of Hawker closes on December 12 and the government will make a decision on which site will go ahead with the plan early next year.

But for friends Ms Tiller and Ms Miller it is too late. Their properties are on the market and both families are planning to move elsewhere in South Australia as soon as they can.

After homophobic jibes, presidential candidate Pete Buttigieg says US has 'moved on'