As the Northern Territory considers contentious reforms aimed at reducing youth crime, Indigenous advocates are urging the government to look at community-based measures instead. In Santa Teresa, a small town outside Alice Springs, several programs are already showing promise.

A recently-proposed crackdown on youth crime in the Northern Territory has been slammed by youth justice, legal and Indigenous advocacy groups, concerned it will increase incarceration rates.

Lobbyists are urging the government to look at alternative measures, with many pointing to existing youth programs already showing promise.

In Santa Teresa, a town just over an hour southeast of Alice Springs and with fewer than 600 residents, skateboarding is fast becoming more than just a hobby for local kids.

Nicky Hayes is an Eastern Arrernte man and youth worker in the community. But first and foremost, he says, he's a die-hard skater.

"It's really empowering, you just feel free on a board," he told SBS News. 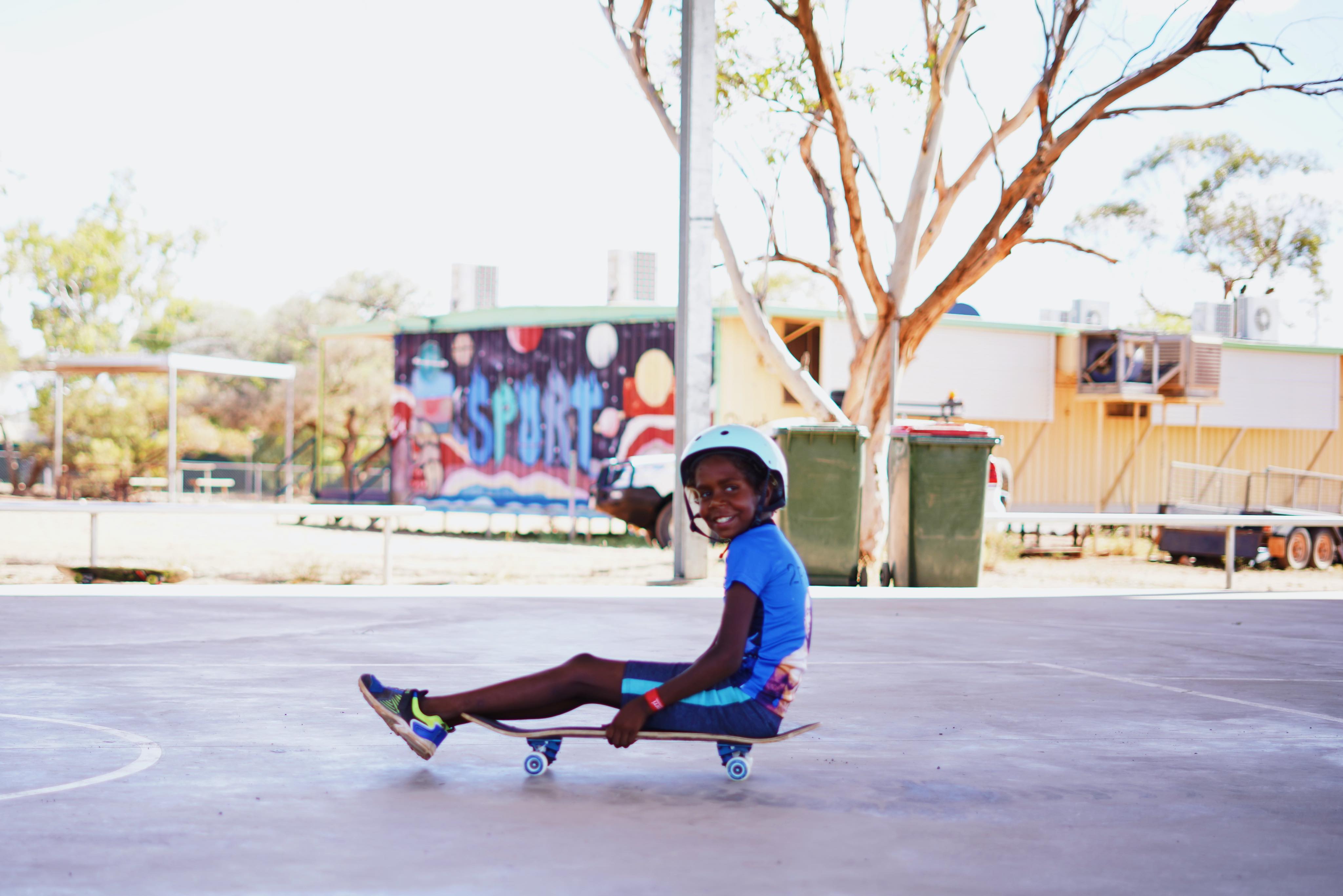 Mr Hayes has been skating since the late 1990s and said, unlike other sports, skateboarding "doesn't have strict rules" and channels "risk-taking energy" in a positive way.

"Once kids are bored, I mean, what's the first thing they're going to do? They'll probably think 'oh, I'm bored, let's break into here', or 'let's steal a car or run amok'," he said.

Mr Hayes is the founder of social enterprise Spinifex Skateboards and runs a youth skate program after school to give kids more options.

"Having this program will give them a choice. Obviously [skateboarding] gave me something to do. I just wanted to give back to the community.

"It doesn't matter what gender you are, what race you are - skateboarding is a community and it's also just fun." Mr Hayes said skateboarding helped him become the adult he is today and hopes the program will give kids the "self-confidence to dream big".

"When I was growing up the perception of skateboarding was that we were up to no good, but it helps build resilience and self-belief," he said.

"Skateboarding is an art form. You can express yourself when you're on a board." 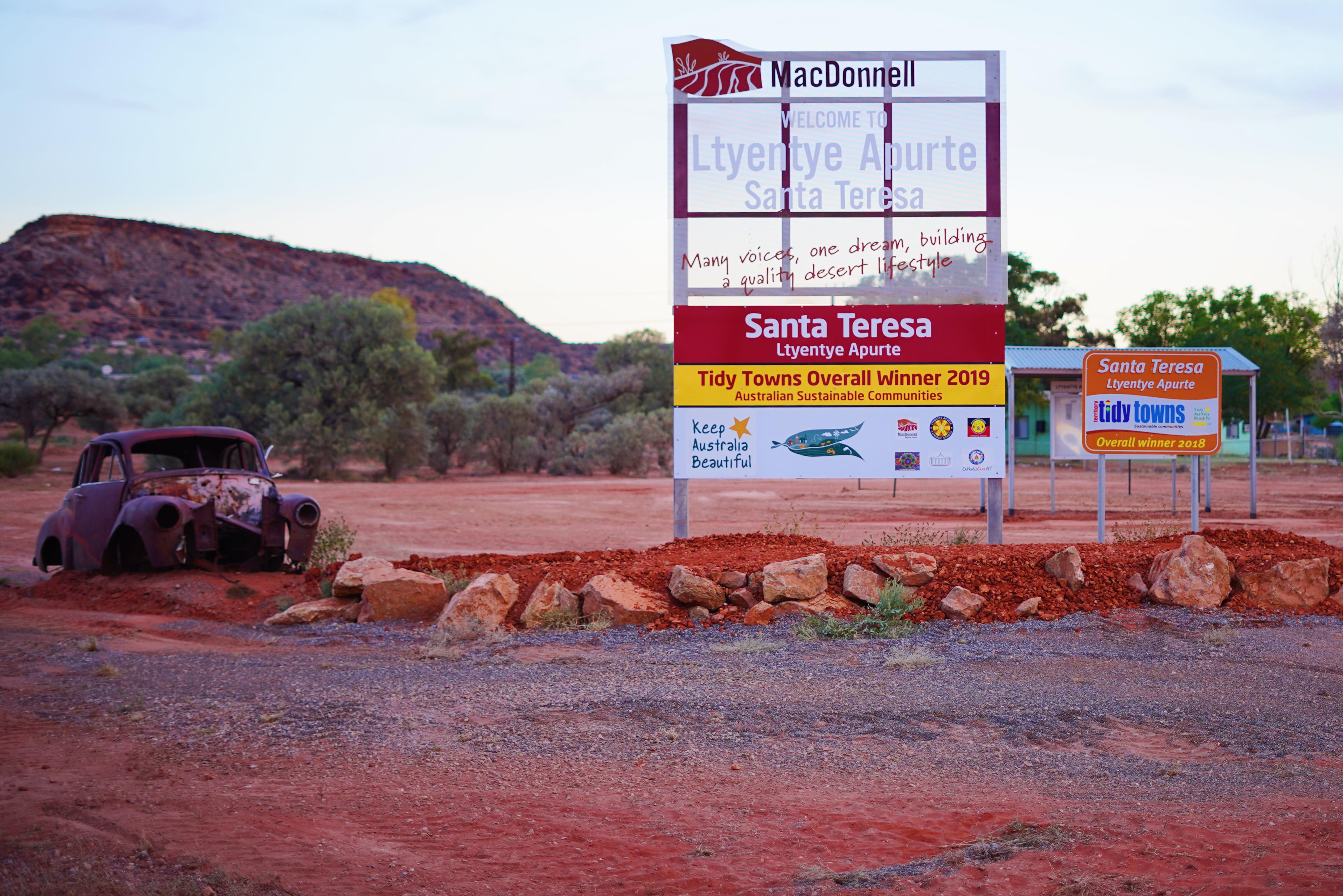 Santa Teresa is just over an hour south-east of Alice Springs with a population of fewer than 600 people.
Aneeta Bhole

While skating is popular among kids in Santa Teresa, it's not the only community program available.

Just down the road, the town's old bakery has been converted into a hairdresser.

"We offer free hair services for the kids to get them off the streets and doing some fun things," salon manager Jasmine Tilmouth told SBS News.

"We've also just started working with the school, so we get the senior girls' class to come twice a week to learn basic hairdressing." Ms Tilmouth said the salon also gives kids a place to go when they need a safe place to turn to.

"A lot of people talk about shame in Indigenous communities, and they don't talk about certain things," she said.

"So being able to come here, the kids learn how to take care of themselves physically and mentally, and the ladies that work here are very happy to talk to anyone that comes in with an issue." 'Bail is a privilege'

Community-driven programs, like those in Santa Teresa, are being heralded by youth justice advocates as a better alternative to the government's crime reforms.

The government has proposed making changes to the Bail Act and Youth Justice Act to "cut crime, keep the community safe and put victims first".

"If you commit a serious breach of bail, bail will be revoked," Chief Minister Michael Gunner said last month.

"Bail is a privilege, not a right. Territorians are trusting you on bail and you must do the right thing while you're on bail."

The revocation of bail would be implemented for serious breaches, such as breach of certain electronic monitoring conditions and curfew, failure to attend court, reoffending while on bail, and failure to complete youth diversion. Police would also have more circumstances where they would be able to immediately electronically monitor a young person who is alleged to have committed a crime.

According to a February report from the Australian Institute of Health and Welfare, the number of young people held in youth detention on an average night fell from 922 to 798 between 2016 and 2020.

However, over the same period, the Northern Territory maintained the country's highest rate of people aged 10-17 in detention on an average night.

As part of last year's Closing the Gap refresh, Australian governments set a target of reducing the rate of Indigenous children in detention by 30 per cent by 2031. An aerial shot of the Santa Teresa township
Aneeta Bhole

The North Australian Aboriginal Justice Agency said the government's changes will disproportionately affect Indigenous kids, who are 17 times more likely to be incarcerated on an average night, according to the AIHW report.

'We want our communities to be safe," NAAJA's chief executive Priscilla Atkins said.

"Locking up kids only makes this worse and we can't keep building more prisons.

"We need to back responses that work, such as continuing investment in community-driven solutions that support Aboriginal children and families."

Ms Atkins also said the Territory's proposed reforms aren’t consistent with recommendations from the Royal Commission into the Detention and Protection of Children in the Northern Territory, which was tabled in November 2017. The commission found that "dealing with children in welfare and detention has not worked in the Northern Territory" and things needed to be done "very differently".

It also said that early intervention and increasing the involvement of Aboriginal organisations in child protection, youth justice and detention settings should be considered going forward.

"This is bad law and bad policy. Knee-jerk responses to crime don't work," he said.

"We need to stay the course of the royal commission's recommendations and invest in evidence-based responses that address the underlying causes of offending."

The government's proposed measures are set to be heard during parliamentary sittings in May.